Huawei seems to be hard at work on a rollable smartphone. Back in April 2020, the company had filed a couple of design patents for a smartphone with a rollable display. It seems to have settled on one of those designs and has already made significant progress with its development.

Spotted by Dutch publication LetsGoDigital, the World Intellectual Property Office (WIPO) recently published a patent from Huawei for “an electronic device having a rolling display comprising magnetic means for flattening the display when extracted”. It accompanies 21-page documentation that contains details about how the technology will work.

Huawei details how its rollable smartphone will work

If you follow smartphone news or technology news in general, you probably know what rollable smartphones are. These devices let you extend the screen size whenever you want, while also being compact enough to fit in your pocket, like a conventional smartphone. But when you pull out that extra portion of the display, it wants to deform as it rolls out. Huawei is using magnets to solve this problem.

Firstly, The upcoming Huawei rollable smartphone will have a portion of the display on the back of it, rather than storing it rolled-up inside the body. According to the report, two strategically placed magnets will pull the display flat against the device as it rolls out to the front. This will prevent it from deforming or causing creases or wrinkles on the surface. The roller sits between the two magnets and extends beyond them in the housing (see attached image below). It prevents the magnets from rubbing against the inner surface of the display, to avoid friction.

This Huawei device will use a POLED (plastic OLED) display with a plastic base layer. This isn’t surprising considering glass isn’t flexible enough for use in such devices.

The upcoming Huawei rollable smartphone can be used at multiple modes: fully rolled-out, fully rolled-in, and partially rolled-out. When fully rolled out, you’ll have a massive 11-inch display at your disposal. You can roll the display back in and you have a standard 6.5-inch smartphone that you can carry in your pocket. In this mode, you should also be able to individually use the back half of the display, though it’s unclear what sort of functionality it will provide.

When will this device come out?

This is one tricky question though. Rollable smartphones are the next big thing in smartphone evolution after foldables. But while foldables are already more than two years old, there’s no rollable smartphone available commercially as yet. We have seen a few operational prototypes or concept devices from the likes of OPPO, TCL, and LG (which will not come out ever as LG has quit the smartphone business), we might still be far from those becoming a reality.

That said, the works are going on and it’s only a matter of time before we start seeing rollable smartphones hit the market. By the looks of it, Huawei could be one of the first OEMs to launch such a device. The beleaguered Chinese company was also early to jump on the foldable bandwagon when it unveiled the Mate X in February 2019, just a few days after Samsung unveiled the Galaxy Fold.

Huawei had filed this rollable smartphone patent on January 31, 2021. It was published last week, on August 5, 2021. You can view the 21-page documentation here. 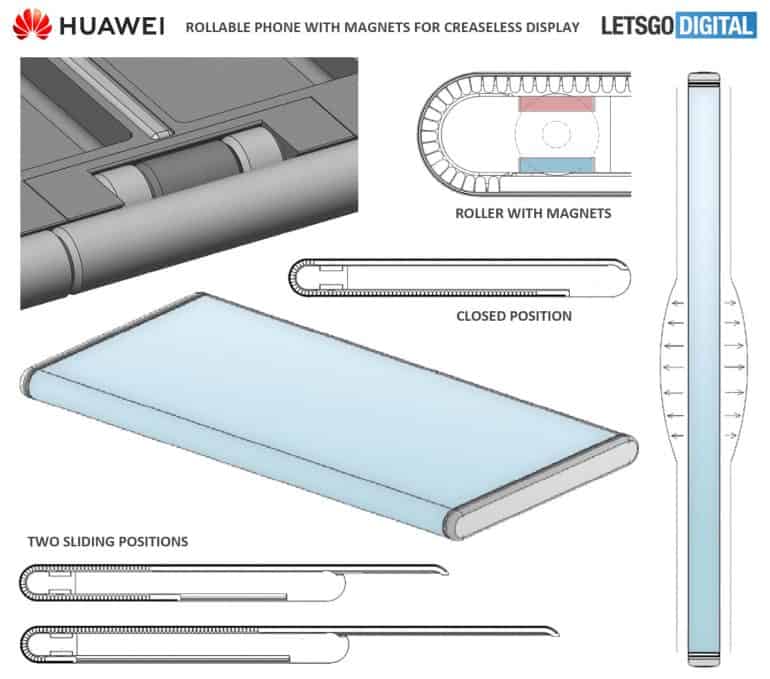