Google is bringing Gmail’s AI-powered Smart Reply feature to Google Docs. The feature will be available to all Docs users over the next few weeks.

If you’ve been using Gmail for the past couple of years, you know how Smart Reply works. The feature suggests relevant responses for emails based on the content of the message. Users can select a suggested quick response to quickly reply to the email, thus saving some time and effort. The response you’ve selected will enter the compose field. You can send it as-is or edit it to make some changes before sending it. Of course, you can type your own message as well if you want to send a more detailed response, or perhaps write something else.

Smart Reply will work similarly on Google Docs as well. Once available, users will see suggested responses for comments just below the reply box. The AI-powered feature generates responses according to what the comment says. Tapping a suggested response will let you quickly reply to the comment. Like in Gmail, you will be able to edit it before sending the reply. You can write your own reply as well. 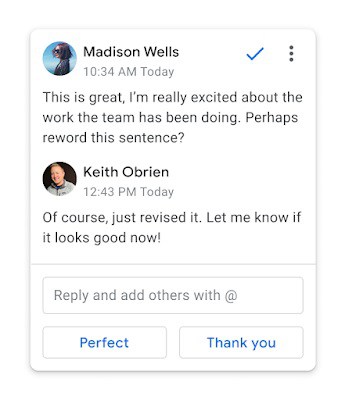 As of now, this feature works with comment threads in English only. Also, you may not get suggestions in all cases. But you can expect Google to improve it over time.

Smart Reply will be available to all Google Workspace customers, G Suite Basic and Business customers, and users with personal Google accounts. There is no admin control for this feature. It will be ON by default for end-users. You can turn it OFF from Tools > Preferences > Show Smart Reply suggestions if you wish.

Introduced in 2017 in Gmail, Google’s AI-powered Smart Reply feature has grown into a quite helpful tool. It may not always offer the best responses for messages, but it often gets the job done when having a conversation. The feature has made it into many other Google products over time.

Soon after Gmail, Android Messages gained the ability to suggest quick responses. Google even integrated smart replies with the Android operating system’s notification system, enabling users to quickly reply to messages from apps like WhatsApp and Signal. Google Docs is now gaining this ability as well.

As always, Google will first make this feature available to users on Rapid Release domains. The rollout for those users has already begun and should be completed in a couple of weeks. Users on Scheduled Release domains will start seeing Smart Reply in Google Docs starting on September 13.