The upcoming Samsung Galaxy S21 FE may not offer expandable storage. The folks over at SamMobile have got hold of the user manual for the 5G variant of the phone and it apparently doesn’t mention the availability of a microSD card slot on it. User manuals usually reveal such detail as they show the various ports and buttons on a device to help users get started with a new device. The user manual for the Galaxy S21 FE 5G does show the SIM tray at the bottom edge but there’s no mention of a microSD card slot. Last year’s model featured a shared slot that housed both a SIM card and a microSD card. It appears the new Fan Edition (FE) will lack expandable storage support.

What’s also missing is a 3.5mm headphone jack. You will require a USB Type-C to 3.5mm adapter to listen to music over a wired connection, or find a pair of USB Type-C headphones.

Samsung will also not include a charging adapter in the box with the Galaxy S21 FE. So unless you have a perfectly working USB Type-C charger spare at home, you will need to buy one separately.

The user manual expectedly doesn’t go into detail about the device specs. But it does hint at the presence of an ultrawide camera, something we know all along thanks to earlier leaks. The manual also talks about tons of camera features including Single Take, Dual Recording, AR Zone, and more. It shows the phone in four different colors: Black, Green, Purple, and White.

There’s been no shortage of Galaxy S21 FE leaks recently. We already know a lot about the phone thanks to those leaks. Now a leaked user manual has further confirmed some of the details, including its design, IP68 rating for dust and water resistance, an under-display fingerprint scanner, wireless charging, wireless reverse charging, Samsung DeX support, Samsung Pay, Dolby Atmos, and more.

Earlier leaks have revealed that the Galaxy S21 FE will feature the Qualcomm Snapdragon 888 or the Samsung Exynos 2100 processor depending on the region. We are expecting up to 8GB of RAM and 256GB of storage. The latter is particularly important because the absence of an SD card slot means 128GB might not be enough for some people.

Other rumored specs include a 6.5-inch 120Hz Super AMOLED display and a 4,500mAh battery with 25W fast charging. The phone is said to go official on September 8th. 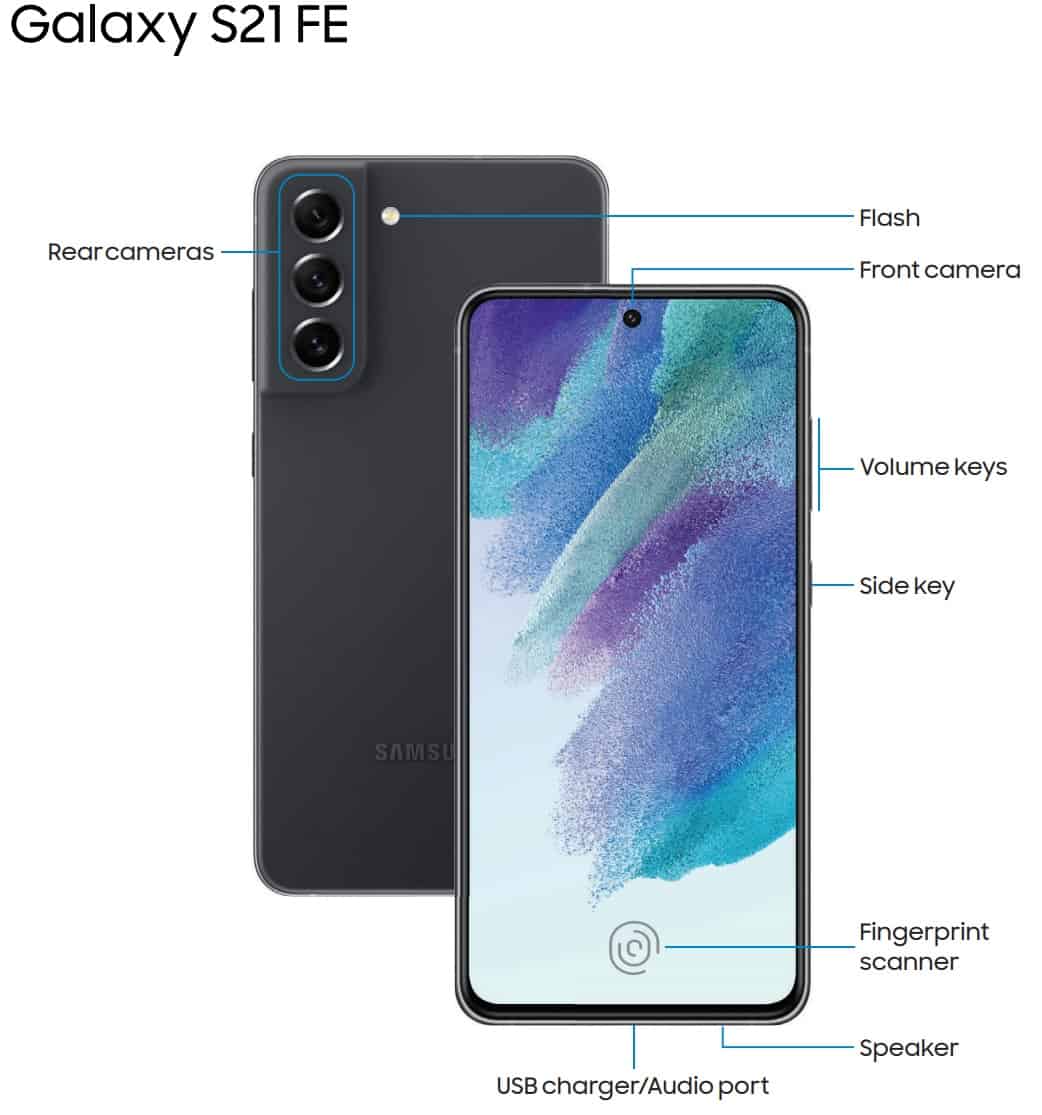