There’s been a lot of confusion surrounding the Samsung Galaxy S21 FE recently but things are now starting to get clearer. The device exists and is nearing its launch. It has just popped up on the Google Play Console, confirming some of the specs that numerous leaks in the past have suggested.

First spotted by MyFixGuide, the Play Console listing reveals that the Galaxy S21 FE will run on Qualcomm’s Snapdragon 888 processor. The listing mentions a triple cluster CPU core arrangement. It has one Kyro 685 core clocked at 2.8GHz, three at 2.4GHz, and four at 1.8GHz. The Adreno 660 GPU is clocked at 840MHz. That’s clearly the standard Snapdragon 888 and not the souped-up “Plus” version. Samsung is seemingly offering at least 6GB of RAM with its upcoming affordable flagship, or dare we say, flagship killer.

If you’ve been following recent Galaxy S21 FE news, you probably know that there are rumors of Samsung launching the device in an Exynos variant as well. It could run on the Exynos 2100 in some markets. Perhaps the company has been forced to do so because of the chip shortage. There’s no evidence of this as yet though. An earlier Geekbench entry also showed the phone with a Snapdragon 888 processor.

Anyways, the Play Console listing also tells us that the galaxy S21 FE will feature a Full HD+ display with a 1,080 x 2,009 pixels resolution and a 480 DPI screen density. Rumors are that it will be a 6.5-inch AMOLED panel with a 120Hz refresh rate.

Other rumored Galaxy S21 FE specs include a 4,500mAh battery with 25W fast charging, an in-display ultrasonic fingerprint scanner, and an IP67 rating for dust and water resistance. It could feature the same triple rear camera setup as the Galaxy S20 FE last year. The device will run Android 11 out of the box, as confirmed by the Play Console listing.

The Galaxy S21 FE is nearing its launch

The Galaxy S21 FE has been in the news quite frequently in recent weeks. Samsung itself has been involved a couple of times. A couple of weeks back, the company accidentally published an image of the unannounced device in an Instagram post. It later took down that post.

Earlier today, Samsung once again confirmed, perhaps prematurely, the existence of the Galaxy S21 FE. Samsung France mentioned the device in a YouTube Premium promotion. All this points towards one thing: the new Fan Edition device is nearing its launch. It shouldn’t be too long now before Samsung officially announces the phone. 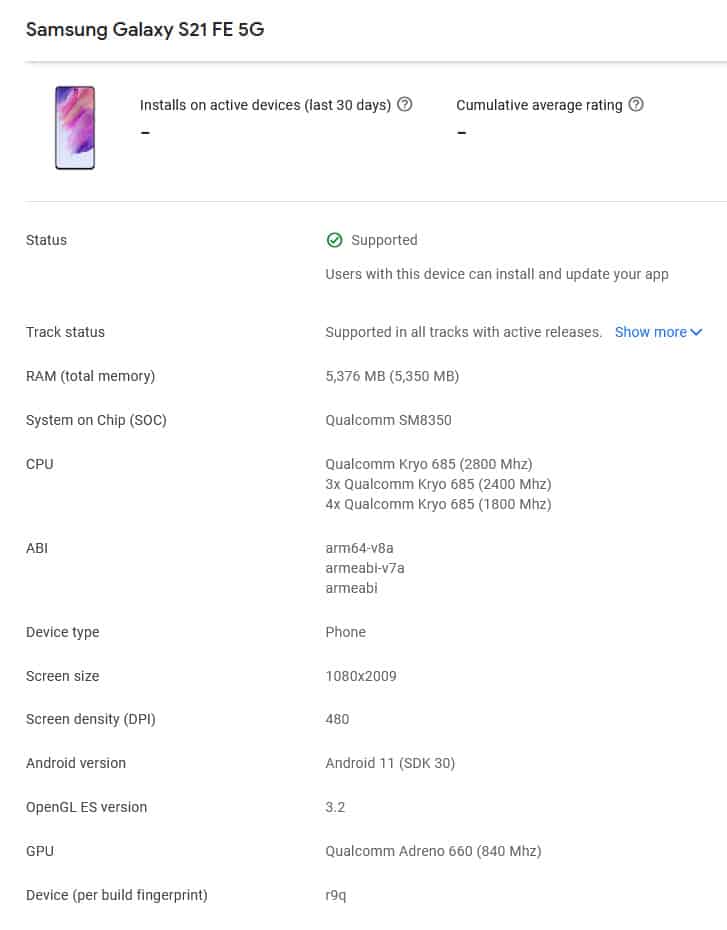