In a recent development, Samsung has released yet another firmware update for the newly launched Galaxy Watch 4 and Watch 4 Classic smartwatches.

The first update for both smartwatches went live even before Galaxy Watch 4 and Watch 4 Classic arrived on the market. It seems like there was something to touch up before users get their hands on these new wearables.

Talking about the Samsung Galaxy Watch 4 and Watch 4 Classic, both wearables run on Wear OS 3, developed in collaboration between Samsung and Google. So, you will get a lot of shades of the One UI.

Besides, the smartwatches can measure your Body Composition, which is a first-of-a-kind feature on a smartwatch. Apart from all the health tracking features, both smartwatches tick all boxes to be arguably the best Wear OS smartwatches you can buy right now.

Now, with the new update, Samsung is adding the Samsung Health function in the settings menu. Samsung Health is an important part of Samsung wearables. The feature is already out for Tizen-based smartwatches, including the Galaxy Watch 3.

The new Galaxy Watch 4 and Watch 4 Classic update is live in the US, UK, Germany, and Italy

The benefit of having Samsung Health in the Settings menu gives users the option to handle all their health-related features from the smartwatch itself.

Along with this new feature, as noted by TizenHelp, Samsung has also added a Cancel button for canceling automatic workout detection.

Moreover, you can use this option to make your smartwatch stop tracking any workout if you wish to save battery. Last but not the least, Galaxy Watch 4 and Watch 4 Classic users can now control volume related settings via the quick settings toggle. Which is again a nifty feature to have.

The update arrives with firmware version R8**XXU1BUH9. Notably, it is currently live for markets like the US, UK, Germany, and Italy. However, we expect the update to begin rolling out in more regions in the coming days.

It weighs around 305.16 MB in size, which is quite hefty for a smartwatch update. We would advise you to download the update on a stable Wi-Fi or mobile data connection.

If you haven’t received the update, then you can head over to the Galaxy Wearable app on your Android phone. Then navigate to Home > Watch software update, and finally click the Download and install button.

The app will look for any new update, and if it detects anything, you can hit the Download button to install the latest update and enjoy the new features introduced with it. 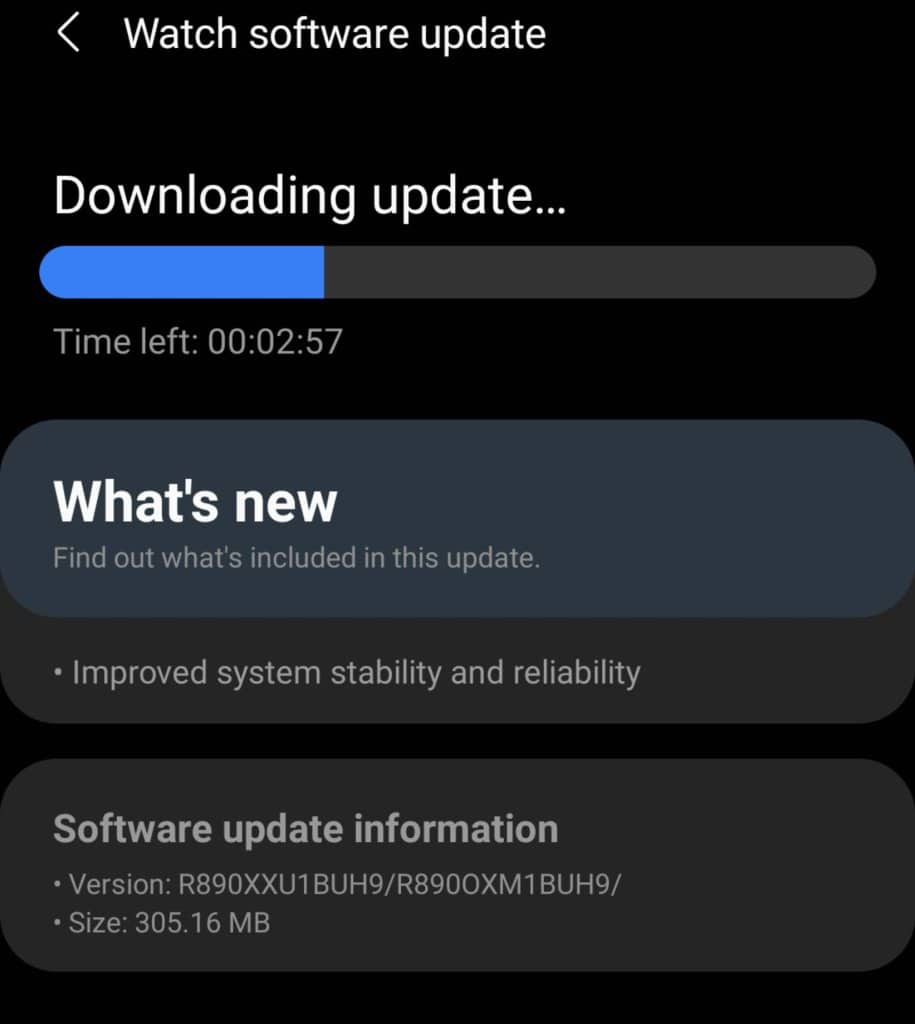