Smart TVs are already a thriving market and will continue to grow at a rapid pace over the next five years, recent market analysis by Strategy Analytics shows. The research firm projects global Smart TV ownership to rise from 34 percent in 2021 to 51 percent in 2026. To put that into numbers, around 1.1 billion households globally will have at least one Smart TV by the end of 2026. Currently, that figure stands at 665 million, the firm says.

According to the report (via FlatPanelsHD), Smart TV sales grew by 7.4 percent in 2020. Sales volume reached 186 million last year, accounting for 79 percent of all flat-panel TVs sold globally. Note that these figures do not take into account streaming devices such as Chromecast, Roku, and Nvidia Shield, but TVs only. Quite clearly, not many people are now buying those old-school ‘dumb’ TVs today.

Unsurprisingly, North America is the largest Smart TV market globally. Over 70 percent of households in the region already own a Smart TV today. That number could grow to well over 90 percent by the end of 2026, the latest market analysis on this subject shows. Western Europe, Central and Latin America, and Central and Eastern Europe are the other three regions that currently have a Smart TV ownership rate higher than the global average. The report suggests these regions could also grow faster than the global average over the next five years.

The Middle East and Africa (MEA) region currently have the lowest Smart TV ownership of just above 10 percent. That number could reach around 20 percent by 2026. Nearly 45 percent of households in the Asia Pacifica region could have at least one Smart TV by the end of 2026, the report suggests. 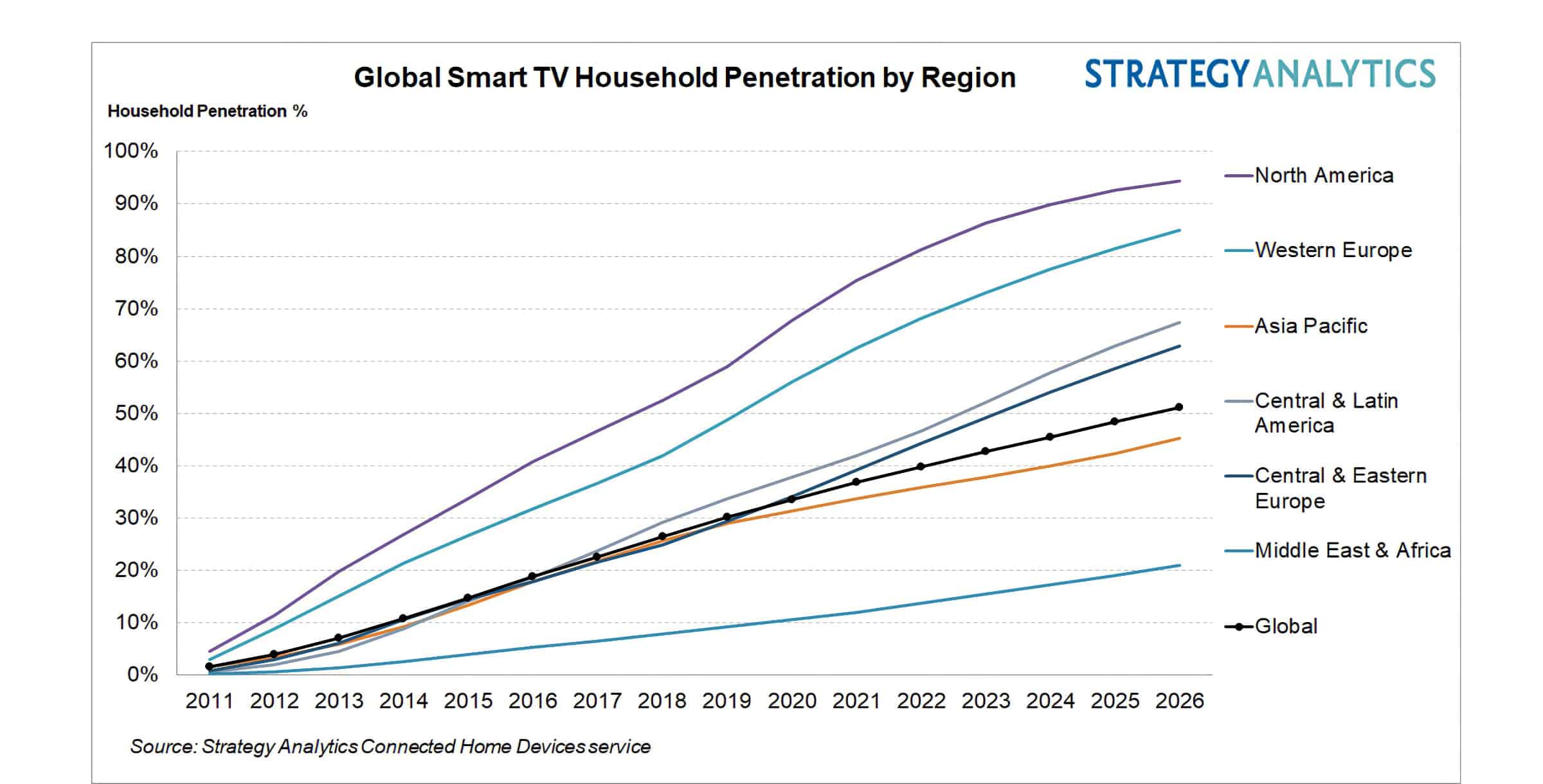 When it comes to the Smart TV platforms, Samsung’s Tizen OS sits comfortably at the top. However, other TV platforms such as Android TV and Roku have also made “strong gains” in recent years, the report notes. The top four platforms accounted for over 50 percent of Smart TVs sold last year, up from 33 percent in 2015.

Google has been making efforts to improve its TV platform recently and those efforts seem to be paying off. Many OEMs are now partnering with Google for its TV platform rather than developing their own. This helps them cut development and maintenance costs and focus the resources on the hardware department. Google last year reported that Android TV grew 80 percent in the US, reaching 80 million devices. Time will tell if the company can challenge Samsung up top anytime soon.