Skip to content
Advertisement
Trusted By Millions
Independent, Expert Android News You Can Trust, Since 2010
Publishing More Android Than Anyone Else
3
Today
126
This Week
337
This Month
4394
This Year
114424
All Time
Advertisement According to a new, preliminary report by Canalys, Xiaomi has managed to trump Apple, and become the world’s second-largest smartphone maker. This is based on a report from Q2 this year.

Based on the report, worldwide smartphone shipments grew 12-percent in Q2 2021. This has been attributed to COVID recovery, at least partially.

Xiaomi becomes second-largest smartphone maker, as it jumped over Apple

According to the report, shown in the image below, Samsung is still the number one smartphone OEM with a 19-percent market share. Samsung grew 15-percent in Q2, according to Canalys’ report. 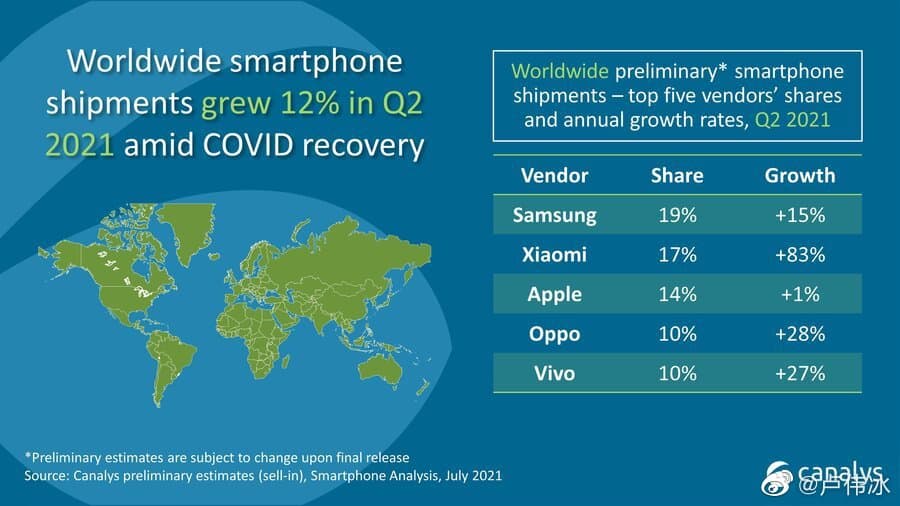 Xiaomi is now second-placed with a 17-percent market share. Xiaomi managed to grow 83-percent in the second quarter, which is a lot more than any other top 5 company.

Apple slid down to the third place with a 14-percent market share. Apple managed to grow only 1-percent in Q2, which is by far the lowest growth rate of any top 5 company.

OPPO took fourth place, but it has the same market share as Vivo, which is fifth-placed. OPPO did manage to grow by 28-percent in Q2, while Vivo marked a 27-percent growth. That’s why OPPO is above Vivo, at the moment.

Xiaomi may overtake Samsung at one point

Canalys also notes that Xiaomi may overtake Samsung and become the world’s number one smartphone OEM at one point. The company also pointed out that Xioami should focus on boosting sales for its premium offerings, such as the Xiaomi Mi 11 Ultra.

Xiaomi’s growth rate has been insane for the last couple of quarters. The fact that the company jumped over Apple in the pecking order is not surprising. Catching up with Samsung will be a bit more difficult, but Xioami is not far in regards to market share.

We’ll see what Q3 will bring to the table. If Xiaomi manages to keep this pace, it will trump even Samsung at one point. We knew that the company has been growing like crazy in Europe, but it seems like its growth rate is even higher in Latin America and Africa.