Skip to content
Advertisement
Trusted By Millions
Independent, Expert Android News You Can Trust, Since 2010
Publishing More Android Than Anyone Else
21
Today
21
This Week
474
This Month
5617
This Year
115621
All Time
Advertisement Yesterday, quietly and kind of out of nowhere, Valve officially announced the Steam Deck, and resellers are already taking advantage of the situation. This is why we can’t have nice things.

Steam Deck reservations went live this morning at 10AM PST. And to help attempt to curb the unauthorized resellers from gouging prices, reserving a Steam Deck requires a valid Steam account in good standing. It also requires you to have purchased something on Steam prior to June of 2021.

Valve says this process would stay in place for the first 48 hours. That means until after 10AM on July 18, you will need to meet those requirements to reserve a Steam Deck. As if any of this would stop resellers though. It’s as if Valve thought that there wouldn’t be throngs of resellers who meet the requirements. Well, surprise, there are. 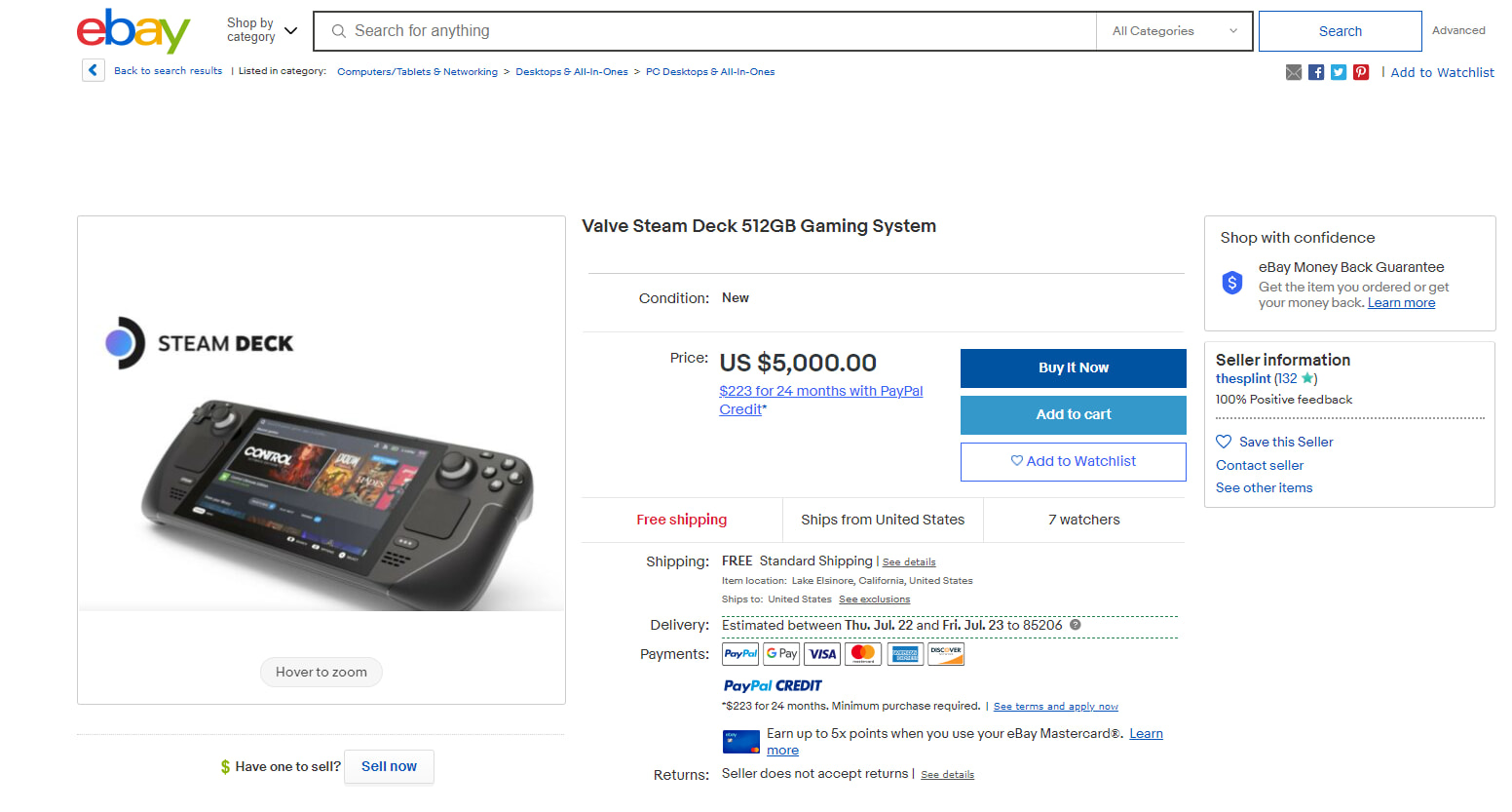 Not more than an hour after (probably much earlier) the Steam Deck reservation period started, sites like eBay have already been flooded with high-priced listings of the portable gaming PC. Some go as high as $5,000. While others are being listed for a more reasonable, but still overpriced amount. Many of the listings started with the 512GB model. Which for many is likely to be the most coveted. Because it comes with the most storage and it’s the only one with the anti-glare etched glass.

But there are now listings up for the 256GB model, and even the base model which only comes with 64GB. While there’s no way to know how many have already been sold for a high dollar amount, at least one has gone for around $1,600 according to Mat Piscatella.

Let the disappointment wash over you

This is likely disappointing for anyone who hasn’t been able to reserve a unit. Especially given the amount of errors people have been running into all morning with the Steam Website and PC client while trying to make the purchase. But no one should be surprised by this outcome.

It’s a resellers market right now. And with the amount of listings for the PS5 and Xbox Series X that are still up at ridiculously high prices, even more than 6 months after the release of both, it was bound to be anything but different for the Steam Deck.

There are still issues with semiconductor shortages. And that probably isn’t going away anytime soon. And in regards to the Steam Deck, it is the first day of the reservation period.

The best advice one could give at this time is to simply not give in to the resellers and to wait for your chance to reserve or buy a Steam Deck at their normal prices. Things will eventually cool down and the Steam Deck will be easier to acquire.