Skip to content
Advertisement
Trusted By Millions
Independent, Expert Android News You Can Trust, Since 2010
Publishing More Android Than Anyone Else
5
Today
90
This Week
355
This Month
5527
This Year
115532
All Time
Advertisement With just under three weeks until the next Unpacked event, all eyes are on Samsung. While the company is getting ready for that, it’s still making time to work on future devices. A new series of patent images, spotted by Let’s Go Digital, shows us a Galaxy Z Flip with a rotating camera.

When closed, this new phone might have a big display

When closed, this Galaxy Flip will look like the current and soon-to-be-released models. It will be a typical clamshell design that takes up as much space as a compact. There are a few interesting takeaways from the patent images, however.

Looking at the left and center images, it appears that one side will have a large display. The Galaxy Z Flip 3 is expected to have a larger display than the first generation. However, these patent images show the full side being taken up by the display. These full displays would be really useful for checking notifications and maybe even sending messages.

While this phone will look nice when closed, the magic happens when you open up the device. There’s no easy way around this: this device will look really odd when open. The camera module will jut from the device at least a centimeter. In it, we see the main talking point: the rotating camera.

From the looks of the patent images, the camera will be able to rotate about 180 degrees, giving you the ability to use both the main camera and the selfie camera.

Circling back to the larger exterior displays, the camera will be great for capturing selfies. You were able to use the tiny exterior display in the Galaxy Z Flip first generation for selfies, but that had obvious drawbacks. The Galaxy Flip with a rotating camera looks like it will solve that problem.

One other problem will arise, however. With the camera module sticking out so much, tabletop viewing will get a bit complicated. You will only be able to use the phone at a 90-degree angle. The camera module might also make handling the phone while open a bit cumbersome. 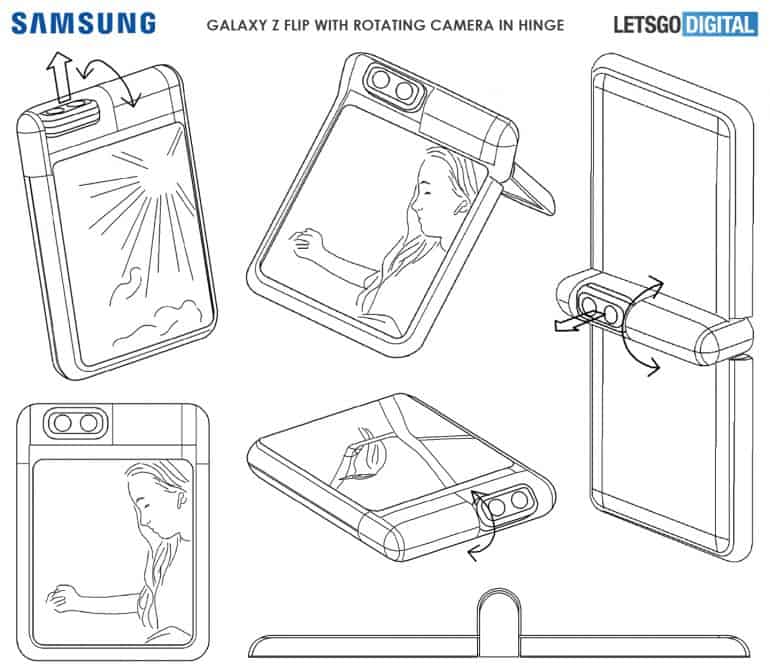 In case you haven’t heard, Samsung’s next Unpacked event is less than a month away

We’re really close to the next Unpacked event from Samsung. It’s slated to kick off on August 11th. While we won’t see the Galaxy Z Flip with a rotating camera at the event, there will be other foldables.

The Galaxy Z Fold 3 will be unveiled at the event, bringing the latest specs to its first foldable line of phones. Along with that device, we’re also going to be seeing the Galaxy Z Flip 3. This phone will be the latest clamshell foldable phone. If you are excited about what Samsung is going to be releasing, mark your calendars!