Skip to content
Advertisement
Trusted By Millions
Independent, Expert Android News You Can Trust, Since 2010
Publishing More Android Than Anyone Else
32
Today
32
This Week
732
This Month
5231
This Year
115240
All Time
Advertisement

Intel recently launched Intel Foundry Services (IFS), a new branch of its foundry division that will manufacture third-party chips. IFS is now “off to the races” as the company announces its first major customers: Qualcomm and Amazon. Intel Foundry will produce Qualcomm chips using its newly-announced 20A process. The company though didn’t announce a timeframe for when the first batch of these chips will arrive. Intel’s 20A node itself isn’t scheduled to be ready before 2024. So there’s some time to it.

It’s also unclear whether IFS will be responsible for the manufacturing of all Qualcomm products or it will only produce select Snapdragon chips coming out at that time. Amazon, meanwhile, isn’t having any of its chips manufactured by Intel. Instead, AWS (Amazon Web Services) will be the first customer to use IFS packaging solutions.

Intel CEO Pat Gelsinger had previously suggested that the company is already in talks with dozens of companies for its IFS division. So you can expect it to name a few more clients in the coming times. But Qualcomm and Amazon could well be the highest-profile clients for Intel Foundry Services.

Intel opened up its foundry to other companies with the launch of IFS earlier this year. The expansion is part of the company’s new “IDM (Integrated Device Manufacturer) 2.0” strategy. It announced a $20 billion investment to build two new fabs in Arizona to expand its production capacity as the tech industry comes together to tackle the ongoing global semiconductor chip shortage.

With this expansion, Intel is now looking to close the gap to TSMC and Samsung in the contract chip manufacturing space. TSMC leads the market with Samsung coming in at the second spot. But Intel hopes to leapfrog the two biggies into the top spot over the next four or five years.

“Building on Intel’s unquestioned leadership in advanced packaging, we are accelerating our innovation roadmap to ensure we are on a clear path to process performance leadership by 2025,” said Mr. Gelsinger during the global Intel Accelerated webcast.

In addition to naming the first two major partners for IFS, Mr. Gelsinger also announced a new naming scheme for the company’s manufacturing process nodes as well as a roadmap during the said event. Its third-gen 10nm chips will be referred to as Intel 7 and it will bring up to 15 percent improvements in performance-per-watt over the previous generation. These chips are already in mass production and should arrive later this year.

Intel’s 7nm process node will now be called Intel 4. It’s still a FinFET product but will use EUV (extreme ultraviolet) technology for an approx. 20 percent performance-per-watt gain over Intel 7. Samsung and TSMC already use the EUV technology for their 5nm products. Intel 4 chips will arrive towards the end of 2022.

Next, we have Intel 3, which is the company’s second-gen 7nm process node. It brings an 18 percent performance-per-watt gain over Intel 4 with increased use of EUV. Manufacturing of these chips will begin in the second half of 2023.

The aforementioned 20A process will mark a major jump in chip technology for Intel. For the first time in over a decade, the company will debut a new transistor architecture called RibbonFET (FinFET has been in use since 2011). RibbonFET is also known as Gate All Around (GAA). Samsung is expected to use this transistor architecture in its 3nm chips in late 2023. In Intel’s case, 20A stands for 20 Angstrom (20A=2nm). As said earlier, Intel 20A will not arrive until 2024.

Lastly, we have Intel 18A, the second-gen Intel chips to use RibbonFET. The development of these chips will begin in 2025. It will now be interesting to see whether all these developments will enable Intel to climb to the top in the chip manufacturing industry. 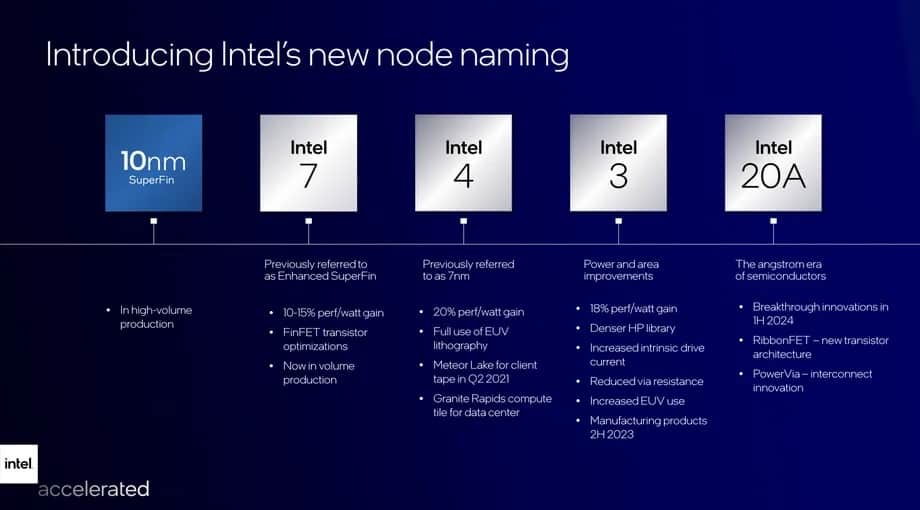