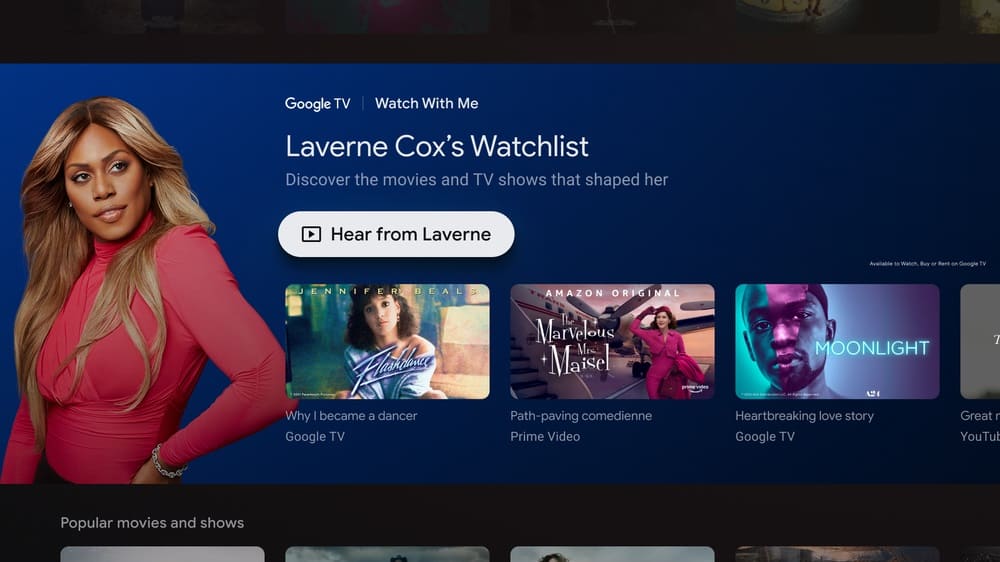 Google TV offers plenty of curated content recommendations for you to binge on. However, if you’ve cycled through all of them and couldn’t find anything to watch, there’s something new coming your way. Google has announced a new celebrity-curated “Watch With Me” series for TV that will bring content recommendations from well-known personalities from around the world.

According to Google, the “Watch With Me” series will available in the For You section of Google TV. It will see “entertainers, artists, and cultural icons” recommending their “top picks” for you to watch. You will also get a “behind-the-scenes” look at the TV shows and movies that inspired them.

The new “Watch With Me” series will roll out on Google TV over the next few days. It will start with top picks from Emmy-nominated actress and LGBTQ+ advocate Laverne Cox. The first episode will spotlight some of Cox’s favorite movies and TV shows. Her picks include The Color Purple, Moonlight, Pretty in Pink, Dangerous Liaisons, Flashdance, The Marvelous Mrs. Maisel, The Matrix, and Breaking Bad.

“I love movies, I love television. I still watch television and film as a way to learn, to escape, to be moved, to laugh, to cry,” Cox says. “My watchlist is all of who I am and everything that has shaped me or helped me understand myself better. Understand humanity better. Understand the craft of acting and filmmaking better. And, it makes me smile.”

The series will also feature an interview with the celebrity who curated the new watchlist. It will highlight their binge-watching habits and will also dive into the reason why they picked a particular title to be featured in their recommendation.

Google TV, though, isn’t a streaming service on its own but a hub. So the recommendations aren’t for a single source. This allows users to watch the content that’s available on the services they have subscribed to. Unfortunately, Google did not reveal who will feature in the “Watch with Me” series on Google TV after Cox. So we’ll have to wait and watch for the time being.