Google Drive isn’t everyone’s first choice when it comes to listening to audio, but it comes in handy when you need to listen to shared content. Now, thanks to the patch notes, we know that there are some nifty features coming to the platform. These new Google Drive features will give you more control over what you listen to. This was spotted and tested by Android Police.

Starting off the new Google Drive features is the ability to control the playback speed of audio files. This could come in handy when you need to slow down any sort of verbal audio. A lot of educational and business material is shared through Google Drive. Having the ability to control the speed will make it easier to absorb what information you need to.

Right now, it’s really hard to guess what kind of controls you will have over the audio. The patch notes don’t mention the specific speeds you will be able to set the audio to. All it says is, “You can now play back your audio tracks at different speeds.”

If other Google IPs are any indication, you might have the same controls as with YouTube videos. On YouTube, you can adjust the speed by 25% increments. The fastest you can go is double the speed, and the slowest you can go is half speed.

Next, you will be able to scrub through the audio from the notification panel

The next addition will let you control the audio position from the notification panel. This is a relatively new feature for Android. While the current version of Drive lets you see the position of the audio from the notification panel, you don’t have the ability to scrub through. You have the ability to do this on YouTube Music, and various other music apps.

It’s hard not to see the charm in that. Instead of having to go into the app to adjust the position of the audio, you can do it right from the notification panel. This was omitted from Drive because it’s really a secondary media player. You don’t really use Drive as your primary media player, so there’s really no reason to add any hardcore music features.

Regardless of this, these new Google Drive features are coming soon. Right now, there’s no word on when to expect these to roll out, but since they are already in the patch notes, it shouldn’t be too long of a wait. 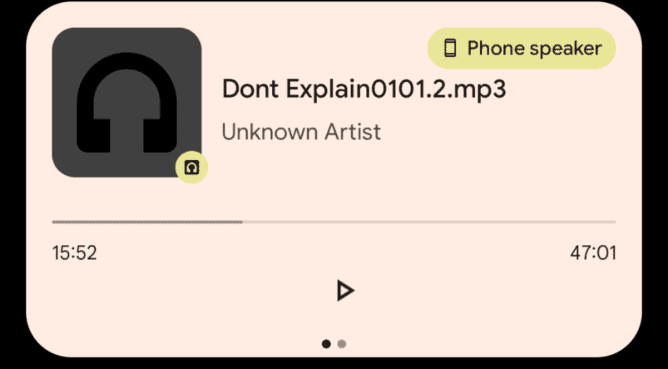