Following an unprecedented slowdown last year, the smartphone market is now on its way to recovery. According to the latest forecasts by research firm Canalys, global smartphone shipments will grow 12 percent year-on-year (YoY) in 2021 to reach 1.4 billion units.

Smartphone shipments fell 7 percent YoY in 2020 due to the COVID-19 pandemic. The market showed signs of recovery towards the end of the year and early this year as the pandemic is subdued in most parts of the world. However, the smartphone industry is now feeling the after-effects of it. A sudden rise in demand for electronic and networking products during the pandemic has caused a component supply issue. There’s a global shortage of semiconductor chips right now, delaying the market release of many new devices.

However, a too-low shipment volume in 2020 isn’t the only factor for a 12 percent YoY growth rate this year. The world hasn’t fully recovered from the COVID-19 pandemic yet. There are still travel restrictions in place in many parts of the world. As such, people have been unable to go on holidays as much as they used to do before this global health crisis struck. Many of them are now opting to spend their disposable income on a new smartphone. 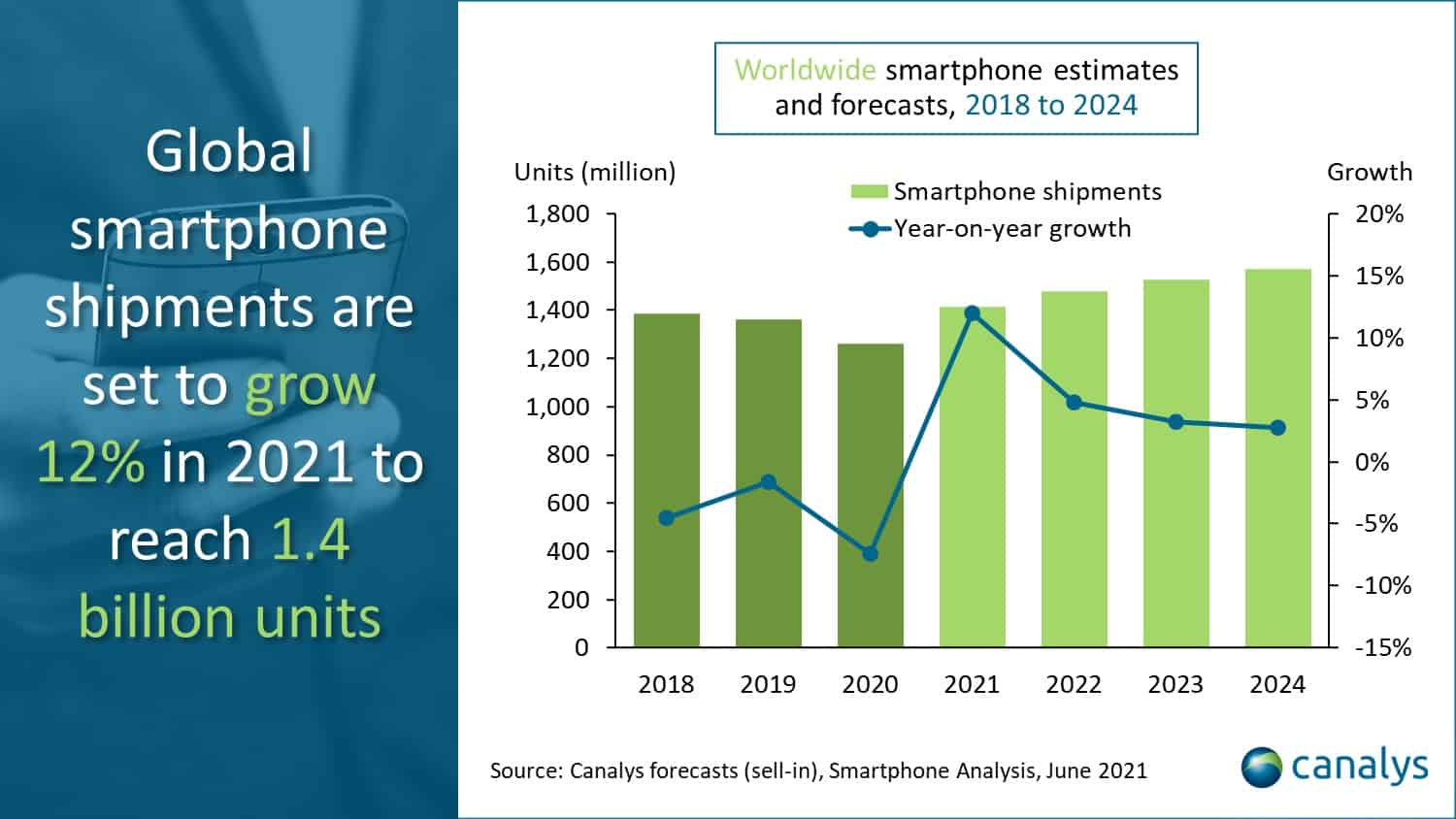 5G is another driving force

The transition from 4G to 5G is rapidly gaining pace. Over the past few months, the 5G price point has come down drastically thanks to the introduction of affordable 5G chipsets like Qualcomm’s Snapdragon 480 and MediaTek’s Dimensity 700. Many vendors are even ready to sacrifice other features like display and camera to accommodate 5G at lower prices. Perhaps they are responding to the growing consumer demand for affordable 5G smartphones.

According to Canalys, 5G handsets accounted for 37 percent of global smartphone shipments in Q1 2021. This share could grow up to 43 percent for the full year. In figures, 610 million of the total 1.4 billion smartphone units expected to ship this year could be 5G-ready. Around 32 percent (195 million) of those will cost less than $300. 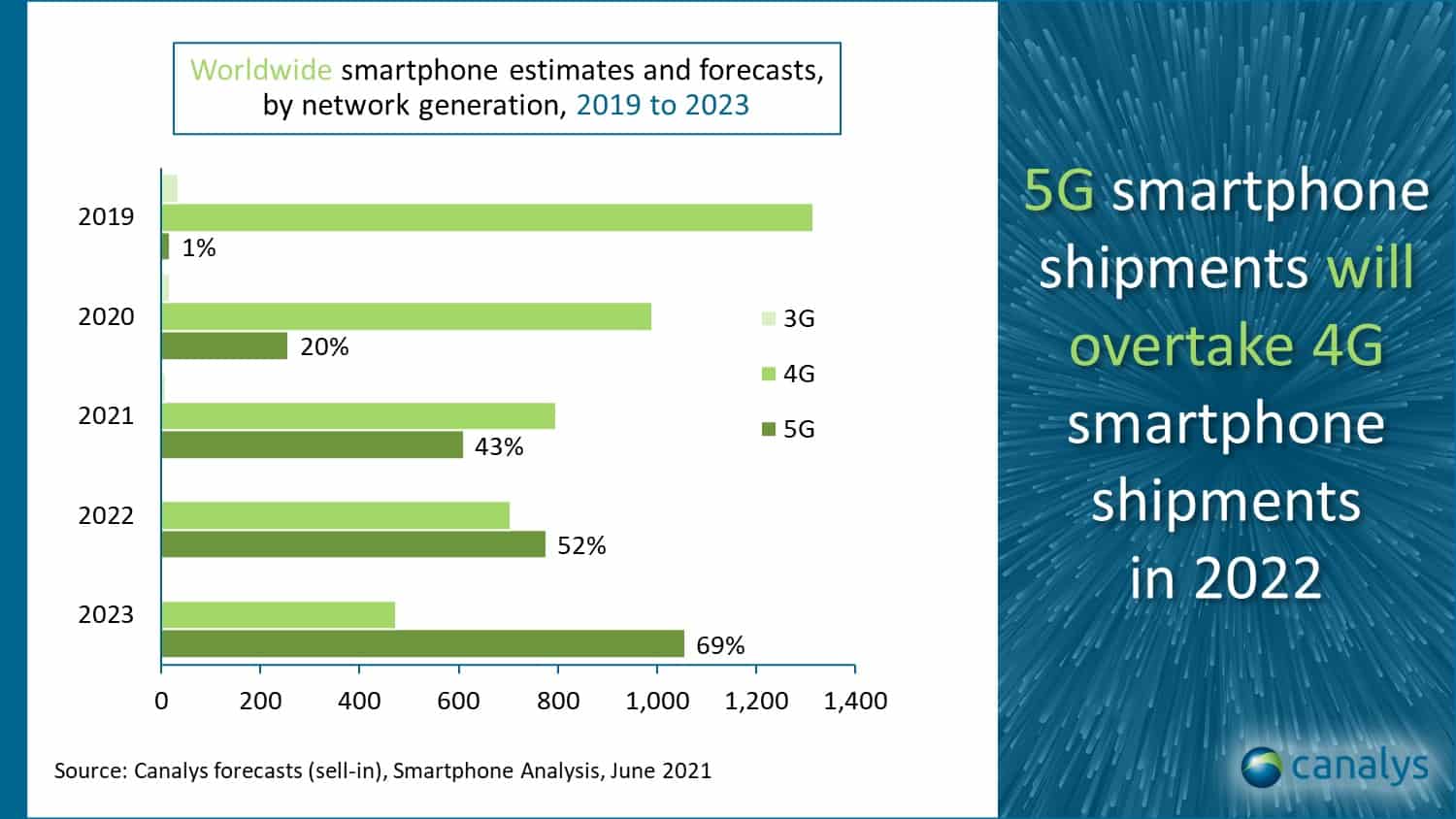 Canalys also published a region-wise breakdown of smartphone shipment forecast and growth for 2021 and 2022. An important takeaway from this data is how the North American smartphone market is expected to decline 2 percent YoY in 2022 when global shipments are still expected to grow 5 percent. 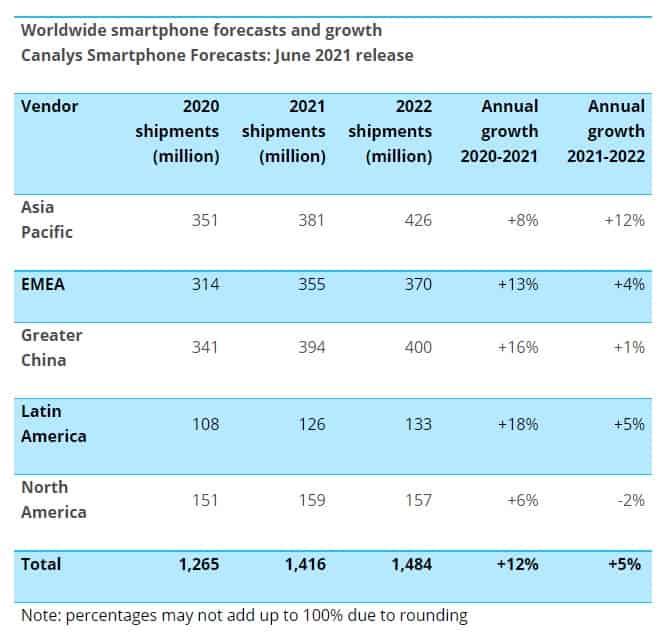