It seems like Samsung plans to position the upcoming Galaxy S21 FE as a replacement for the ‘Note’ lineup. As most of you know, Samsung won’t be announcing a ‘Note’ smartphone this year.

The Galaxy Z Fold 3 is said to be coming with S Pen support around the same time the Galaxy Note is coming. Many assumed that it is supposed to replace the Galaxy Note series, and that’s still true, kind of.

The Galaxy S21 FE may serve as a replacement for the ‘Note’, kind of

So, what does the Galaxy S21 FE has to do with anything. Well, Evan Blass aka @evleaks, claims that “Samsung is positioning the S21 FE as the followup to last year’s Note’. He’s basing this information on some sort of roadmap that leaked (image below). 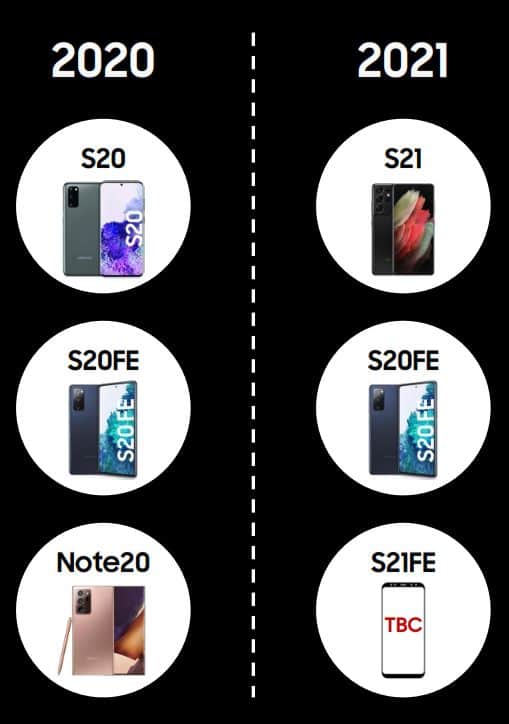 It seems like Samsung is expecting the Galaxy S21 FE to be immensely popular once it launches. Just to be clear, the Galaxy S21 FE, Z Fold 3, and Z Flip 3 are all rumored to launch in August, during the same event.

The Galaxy S20 FE was quite popular last year, so this kind of makes sense, even though it’s nowhere near the same profile of a device. The Galaxy S21 FE won’t support the S Pen, in case you were wondering.

For many people, the S Pen was the main selling point for a Galaxy Note device. That is logical, it’s a very useful tool, no matter how you spin it. Even the people who purchased it, and didn’t use the S Pen, found great value in the device, though.

We’ll see what will happen, but we’re expecting a huge marketing push for the Galaxy S21 FE, based on the info provided by Evan Blass.