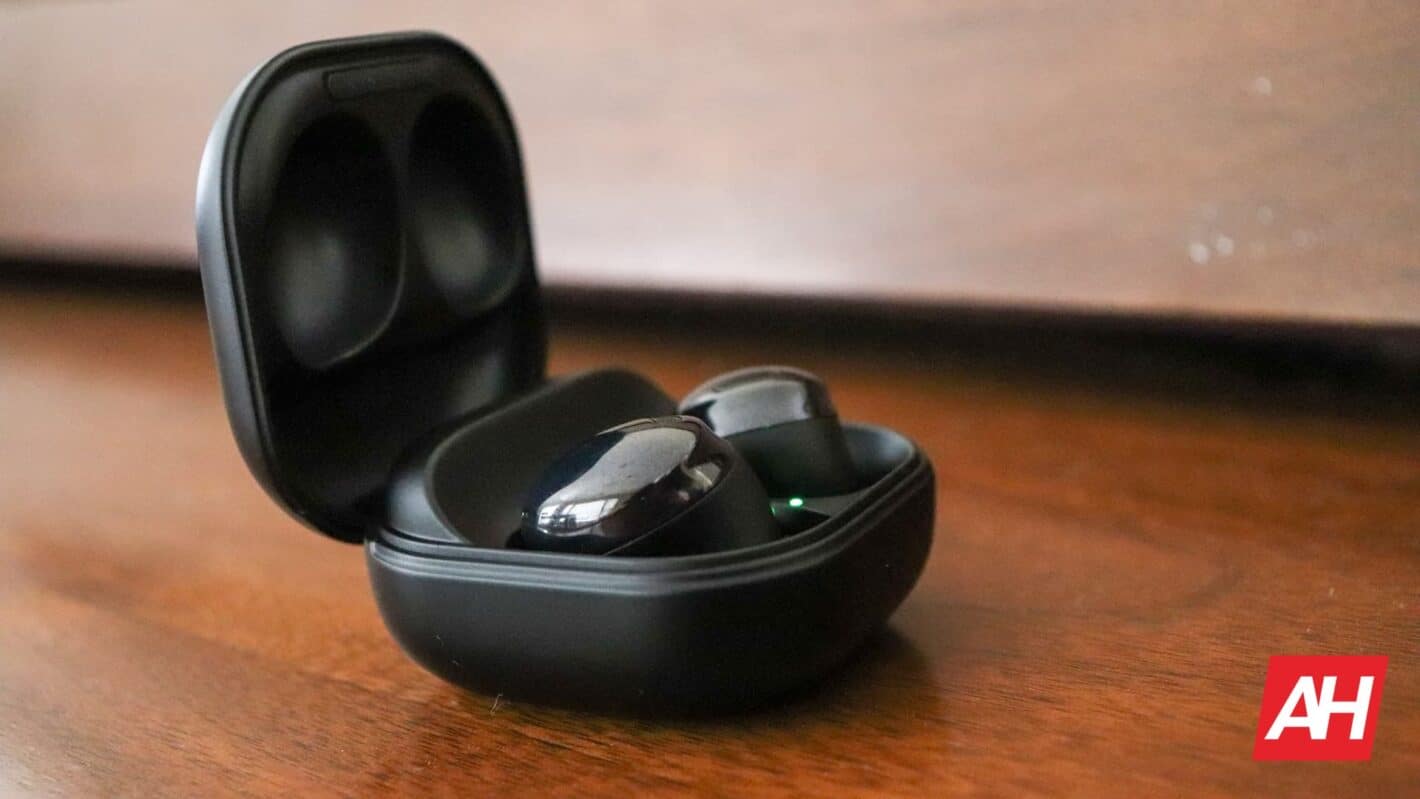 Samsung is doing really well in the earbuds market, as far as first quarter of 2021 is concerned especially. With the TWS (True Wireless Stereo) market currently in recovery mode, wireless earbuds selling for more than $100 have regained their grip in Q1 2021.

Samsung grabbed the third spot in the global TWS segment in terms of market share. The South Korean tech giant was only behind Apple and Xiaomi.

Apple and Xiaomi have seen a drop in their market share as compared to the previous quarters. However, Samsung managed to improve its performance in Q1 and reduced the gap between it and the Chinese electronics behemoth, Xiaomi.

Samsung grabs 2nd place in the over-$100 TWS market

The over-$100 TWS market segment witnessed a major drop in the first three-quarters last year due to the coronavirus pandemic. The $100+ segment, on the other, recovered in Q4 and improved throughout Q1 2021.

The $100+ segment reached an impressive 46 percent market share. With customers gradually moving towards higher-cost solutions, the high-end market is on the verge of recovery, according to SamMobile. 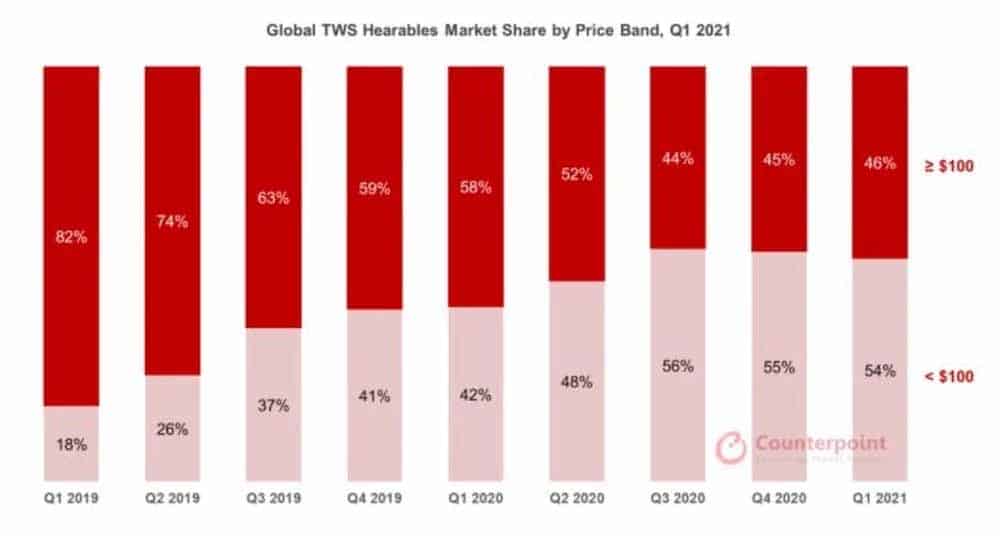 Apple was leading the $100+ TWS segment with a significant 57 percent market share. Samsung wasn’t far between with a 17 percent share, as noted by Counterpoint Research.

How did Samsung dominate the market in Q1?

The company is expected to unveil new pair of earbuds in July or August. The upcoming earbuds will be called the Galaxy Buds 2. If this proves to be true, Samsung will be able to maintain its momentum throughout Q1 2021. 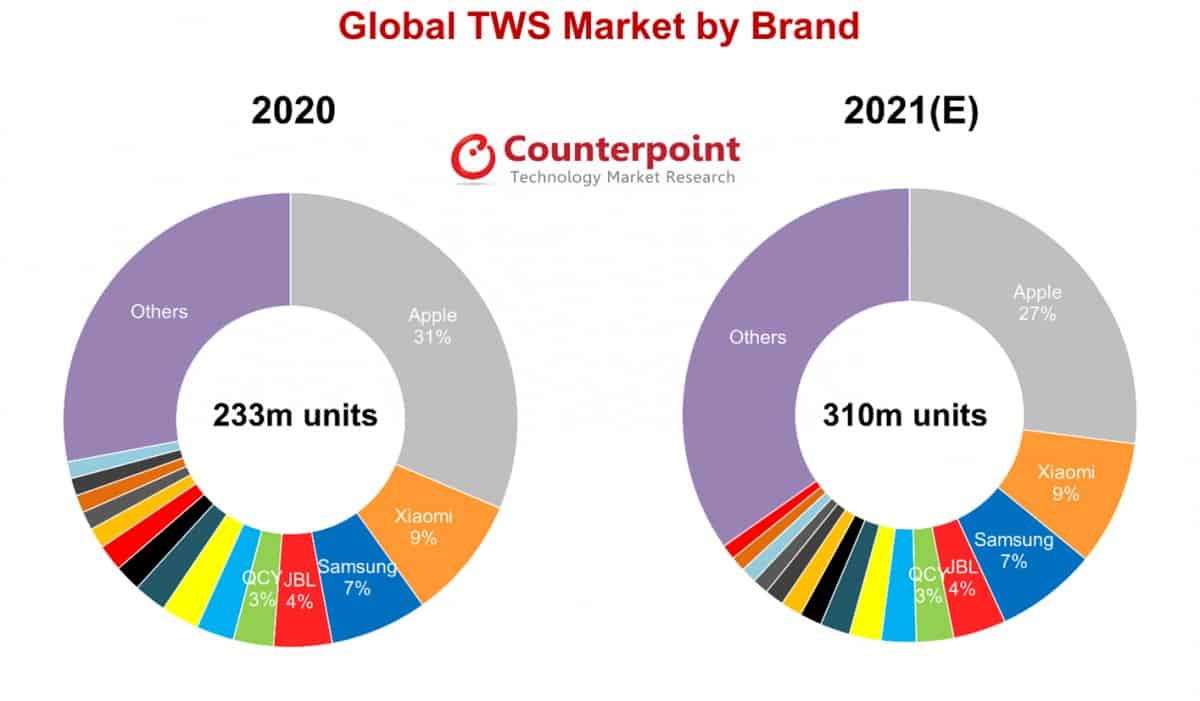 Samsung’s subsidiary JBL is expected to be ranked fourth in the TWS market worldwide with a share of 4 percent shipments. Last year, JBL sold a whopping 9.2 million truly wireless earphones, and the brand is expected to increase the number to 12.4 million.

If Samsung’s numbers are combined with JBL’s, the former becomes the second-biggest TWS brand this year. The Korean tech firm is expected to announce the much-awaited Galaxy Buds+ successor later this year.

Aside from that, the company could introduce better battery life and audio quality in a similar design. Samsung has neither confirmed nor denied its plan to launch the successors to Galaxy Buds Live.