The Philips Hue app is getting a major design overhaul. Signify (formerly Philips Lighting), the Dutch company that makes Hue lights, says it has rebuilt the app from the ground up. The redesigned version of the Philips Hue app features over 100 changes that make it easier to control your Hue lights.

With the latest update, you can quickly access room controls. The Home tab lists all the rooms and zones in your house. When you tap on a room or zone, it will show all your lights and pre-set scenes in Tile view. You no longer need to dig deep if you want to change each light’s brightness, temperature, or color. You can access all your lights within a room in one place.

Earlier, you had to switch around multiple tabs to control lights in a room together or individually. There was a good you’d get lost in between. The newer version streamlines things significantly.

If you use multiple Hue bridges, you can now switch between them with the tap of a button on the Home tab. The Hue Scene Gallery is also now featured on the main screen, making it easier to discover scenes crafted by Hue’s lighting experts. The redesigned Philips Hue app also lets you add new lights to a Room from within the Room tab. In the prior version, you could do that from the Settings menu only.

Another notable change is the removal of the Routines tab. Signify has replaced it with a new Automations tab, which offers more advanced customization options for automatically triggering your lights on and off. Thanks to the new multi-user geofencing feature, the app will now check if someone’s in the home before triggering the “Coming Home” or “leaving home” automation. This will ensure that lights aren’t suddenly turned off when someone is still in the house, even if the controller of the app has stepped outside.

The sunset and sunrise automations are getting some improvements as well. You can now choose to activate a scene before the set time or turn off a scene after it’s over, rather than right at sunrise/sunset as before. 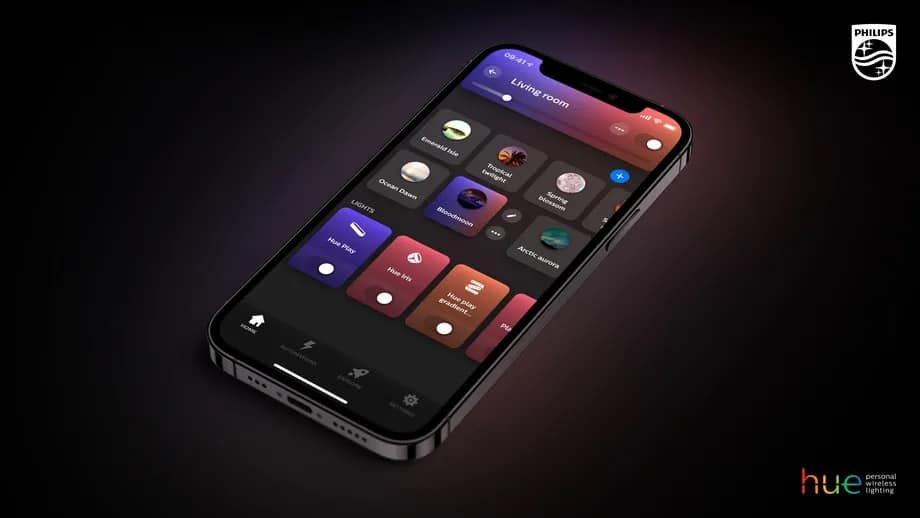 The new version is now rolling out globally

The redesigned version of the Philips Hue app is now rolling out on Android and iOS globally. You can download/update the app from the Play Store (link below). If there’s no update available, it should show up in the coming days. Signify says another update later this summer will introduce a “dynamic scenes” feature to the app. This will allow lights to automatically transition through different colors.