OnePlus has announced its latest mid-range offering, the OnePlus Nord CE (Core Edition). The new device builds on the Nord lineup’s winning formula – focus on the fundamentals and keep the price low. It brings minor improvements all around while doing away with unnecessary extras like a dual front camera.

The OnePlus Nord CE sports a 6.43-inch 1080p Fluid AMOLED display (2400 x 1080 pixels) with a 90Hz refresh rate. There’s no always-on display (AOD) but OnePlus promises ambient display and reading mode support. Under the hood is the Snapdragon 750G processor paired with an Adreno 619 GPU. OnePlus claims up to 20 percent faster CPU performance, while the GPU is 10 percent faster. The phone will be available in three different memory configurations: 6GB+128GB, 8GB+128GB, and 12GB+256GB. There’s no microSD card slot for expandable memory though.

While the OnePlus Nord CE similar styled camera bump on the back as the original Nord, there are only three cameras on the new phone: a 64-megapixel (F/1.79) primary shooter, an 8-megapixel (F/2.25) ultra-wide lens with a 119-degree field of view, and a 2-megapixel (F/2.4) monochrome lens for depth sensing. So it misses out on a macro camera.

There’s one less camera on the front as well. The OnePlus Nord CE gets a 16-megapixel (F/2.45) Sony IMX471 sensor housed inside the tiny punch-hole cutout in the top-left corner of the display. It can capture 1080p video at both 30fps and 60fps. OnePlus also promises time-lapse videos with the front camera.

The OnePlus Nord CE measures 159.2 x 73.5 x 7.9mm in dimension and weighs 170 grams. So it’s thinner and lighter than the original Nord. This is perhaps the slimmest OnePlus phone since the OnePlus 6. However, despite this, the company has managed to put a 3.5mm headphone jack on this phone, something that was missing on last year’s model. 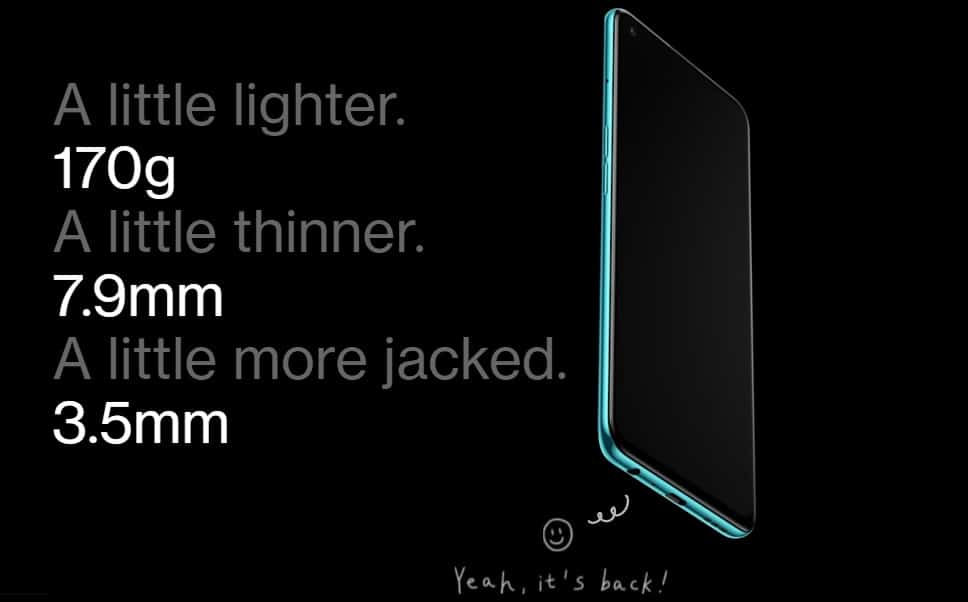 On top of that, OnePlus is also offering a bigger 4,500mAh battery on the new phone, over the original Nord’s 4,115mAh. It supports Warp Charge 30T Plus fast charging over USB Type-C 2.0, which the company claims can charge the phone up to 70 percent in just 30 minutes.

Other connectivity features include 5G (where available), Wi-Fi 802.11 a/b/g/n/ac, Bluetooth 5.1, NFC, and GPS. Sensors on board include an in-display fingerprint sensor, accelerometer, electronic compass, gyroscope, proximity sensor, and others. The phone supports dual nano-SIM and will run Android 11 out of the box, with OnePlus’ OxygenOS on top.

If you recall, the original Nord cost €399/£379 for the 8GB model at launch. So OnePlus has managed to cut the price a bit while still offering a comparable phone, if not better. The company is currently taking pre-orders for its latest mid-ranger, with shipping starting on June 14th. The device comes in Blue Void, Charcoal Ink, and Silver ray colors.

In terms of availability, the OnePlus Nord CE will be available in 47 countries at launch, including much of Europe and select Asian and Middle East countries. Like the original Nord, there are no plans for a US launch as yet. We will let you know if things change later on.