Motorola is preparing to launch a new stylus-equipped affordable 5G smartphone in the coming months – the Moto G Stylus 5G. The phone has appeared in leaks several times over the past few months. Now, it’s starting to pick up necessary certifications as well.

Earlier this week, the upcoming Moto G Stylus 5G popped up on benchmarking platform Geekbench, revealing a few details. The handset will feature an octa-core Qualcomm processor operating at a base frequency of 1.8GHz. The chipset has six CPU cores clocked at 1.8GHz while two other CPU cores run at up to 2.04GHz. Digging deeper into the Geekbench listing reveals an Adreno 619 GPU as well. All this points to none other than the Snapdragon 480 5G SoC, which is supported by some earlier rumors as well.

According to the Geekbench entry, the processor is supported by 6GB of RAM. There might be other memory variants as well, though. Perhaps with a lesser amount of RAM (4GB maybe?). Anyways, the device will run Android 11 out of the box. The previously rumored Denver codename can also be seen in the entry.

That’s pretty much all the information about the Moto G Stylus 5G revealed in this Geekbench listing. However, the device recently picked up the Bluetooth SIG certification as well. It bears the model number XT2131 and supports Bluetooth 5.1. The Bluetooth SIG listing also hints at multiple variants of the phone with model numbers XT2131-1, XT2131DL, and XT2131-3. 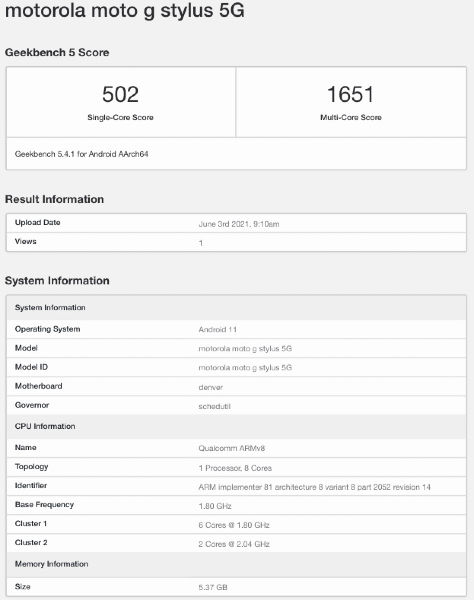 The upcoming Moto G Stylus 5G first appeared in leaked renders in early January this year, just days before Motorola announced the Moto G Stylus (2021). Another leak followed in March, revealing its design from all angles as well as some of its key specs. Earlier this month, the handset appeared in one more leak, with reports claiming that it will be available in the US once it goes on sale.

Leaked specs suggest it will be a decent budget 5G phone. We are looking at a 6.8-inch FHD+ punch-hole display with a 60Hz refresh rate, up to 6GB of RAM and 256GB of storage, 5,000mAh battery with 10W charging, 3.5mm headphone jack, quad rear camera setup with a 48-megapixel primary shooter, Android 11, and stylus pen support, of course.

Don’t expect a high-performing device though. The Snapdragon 480 5G SoC is the humblest 5G-capable processor from Qualcomm. Nonetheless, now that the device has started picking up necessary certifications, it shouldn’t be very long before Motorola officially announces the new stylus-equipped 5G phone. 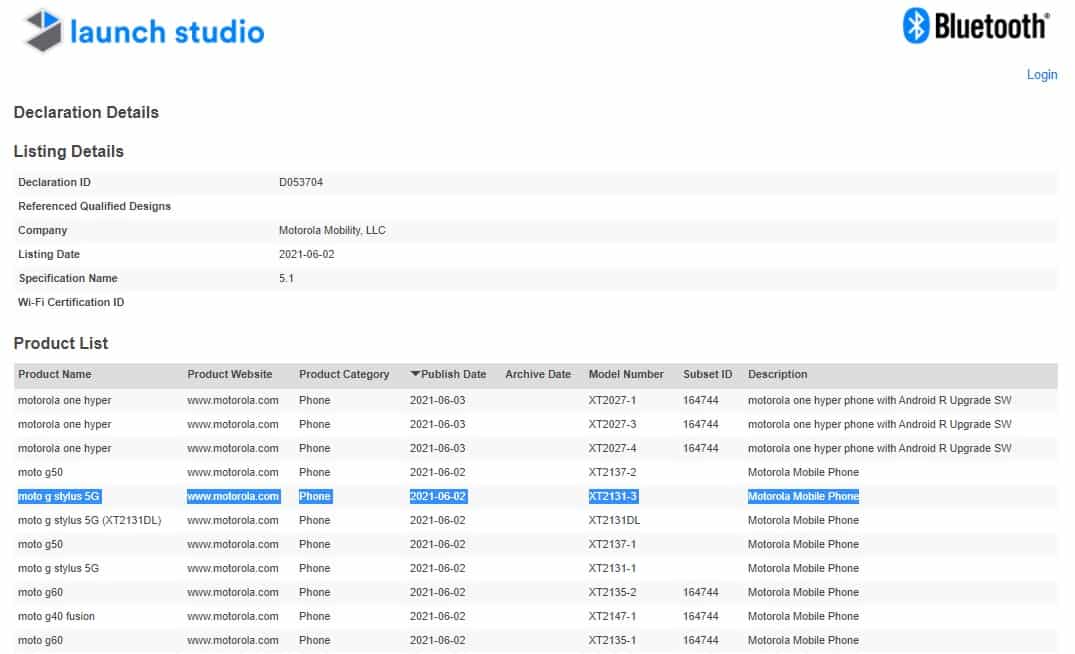