Mark Zuckerberg and WhatsApp CEO Will Cathcart have revealed details about some upcoming features.

The rumor mill has been churning out various speculations surrounding new features coming to WhatsApp. WhatsApp is reportedly working on features such as View Once, multiple-device support, and an improved disappearing message.

Zuckerberg and Cathcart have finally confirmed these rumors. The Facebook chief and WhatsApp chief executive have revealed to the person behind the WABetaInfo website that these features are actually under development.

The duo reportedly spilled the beans about upcoming WhatsApp features. It is worth noting that the news didn’t surface via a social media post or a press release.

Details about impending WhatsApp features found their way on the web via an apparent group chat with a popular leaker. The person behind the WABetaInfo website was added to a WhatsApp group chat featuring Cathcart and Zuckerberg, according to AndroidAuthority.

The Facebook co-founder revealed several upcoming features including disappearing mode for the chat thread. It was limited to one-on-one chats until now.

This “view once” functionality allows users to send a message to someone and have it disappear once they view it.

Zuckerberg also confirmed multi-device support. This feature would enable users to access the messaging platform on laptops, tablets, and other devices without the main app on the smartphone. 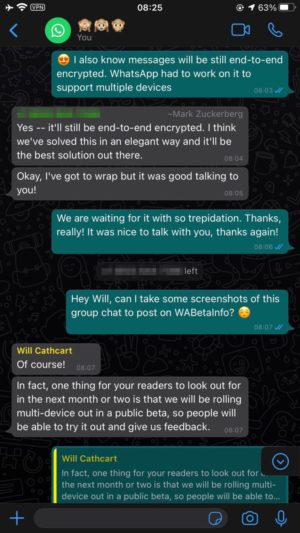 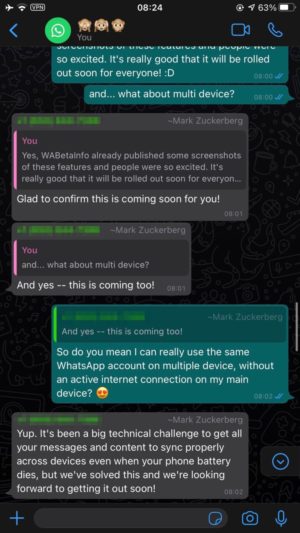 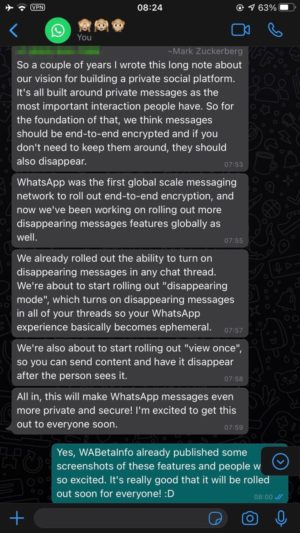 To use the WhatsApp web or WhatsApp desktop app, users require connectivity with the app on mobile phones. Cathcart told the publication that users will be able to connect the messaging platform to up to four linked devices with the multi-device feature.

On top of that, they will be able to access the app via iPad. The company will roll out the beta for more iOS users within the next two months. Telegram and other similar apps have been offering multi-device support for quite some time now.

Last year, WhatsApp released the Disappearing Messages feature. Users have to enable it for group or personal chats individually.

According to Zuckerberg, the improved disappearing mode will automatically start short-lived messages in new chat threads.

Facebook CEO said the View Once feature will complement the Disappearing Messages feature. The feature is similar to Snapchat’s instant messages.

However, WhatsApp has not confirmed details about the chat migration tool that is available in beta form at the moment. The update will be quite important for those switching devices between Android and iOS.