Google is currently working on a scheduled dark mode feature for Chrome OS. Dark mode has garnered huge popularity over the last few months due to several reasons.

First off, dark mode reduces the strain on the eyes when using computers for a longer duration. Aside from that, it looks highly appealing.

Popular platforms such as Android, Windows, and macOS have been offering darker shades for quite some time now. Now, it looks like Chrome OS is gearing up to introduce a similar dark mode feature.

Chrome OS is finally getting a scheduled dark mode

Work on dark mode kicked off almost a year ago. Nevertheless, it still looks unfinished since it is still in ongoing development.

However, Google seems bent on making the popular dark mode feature even better. Android Police has been closely monitoring the company’s ongoing effort to enhance Chrome OS customization via its system preferences.

Regrettably, Chrome OS customization such as custom virtual desks didn’t see the light of the day. As part of an ongoing commit, Google is adding a toggle under Personalization to activate the dark mode. 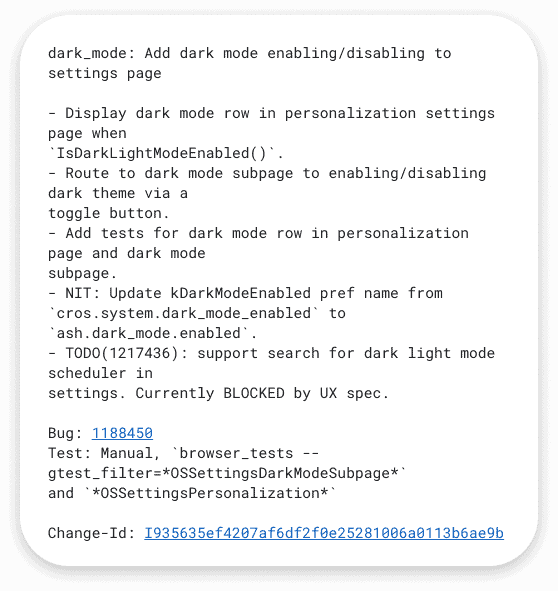 Much to the delight of many, users will be able to schedule it based on the time. This has been a highly requested feature for quite a while now.

The abovementioned commit message explains how the search engine giant plans to fit dark mode into Chrome OS settings. Aside from some developer jargon, there are a few noteworthy takeaways in the commit message.

If you check the third bullet point, the developer clearly states they would adding a dark mode subpage under Personalization. In other words, users will have full control over how Chrome OS applies it.

Developers have also explained what users will be able to customize after the code gets merged in the last two points. This is where exciting details are.

Google is gearing up to bring scheduled dark mode to Chrome OS. This will be further complemented with the option to keep Chrome windows light, and using dark system UI at the same time.

It will be interesting to see if Google allows users to change the dark mode to activate on the basis of sunset and sunrise times. This interesting feature is available on Android OS.

Meanwhile, dark mode continues to grow in terms of popularity on a laptop, desktops, and smartphones. This mode is not only aesthetically pleasing, but it also minimizes eye strain at night.