Brave, the company known for its privacy-first browser of the same name, has launched a new search engine. Aptly named Brave Search, the new tool is now available to users globally in a public beta. The new search engine will use technology developed by Tailcat, an open search engine Brave acquired earlier this year.

The company touts “unmatched privacy” with Brave Search. It puts users first, giving them full control over their online activities. Advertising and data industries don’t take precedence. Moreover, unlike most other search engines, it doesn’t track users or create a profile to track their searches or clicks.

“Brave Search is the industry’s most private search engine, as well as the only independent search engine, giving users the control and confidence they seek in alternatives to big tech,” said Brendan Eich, CEO of Brave.

Brave Search will use a completely independent index for answering common queries. However, for certain queries and areas such as image search, the company says its search engine is not mature enough to provide relevant results. In such cases, it will use APIs to fetch results from other services such as Microsoft Bing. This will still not compromise privacy or result in any tracking of the users. However, it will be reducing the independence metric that Brave hopes to achieve someday.

The company also claims transparency of search results with Brave Search. There are no secret methods or algorithms to bias results. The new tool will also soon get “community-curated open ranking models”. This will “ensure diversity and prevent algorithmic biases and outright censorship,” the company says. 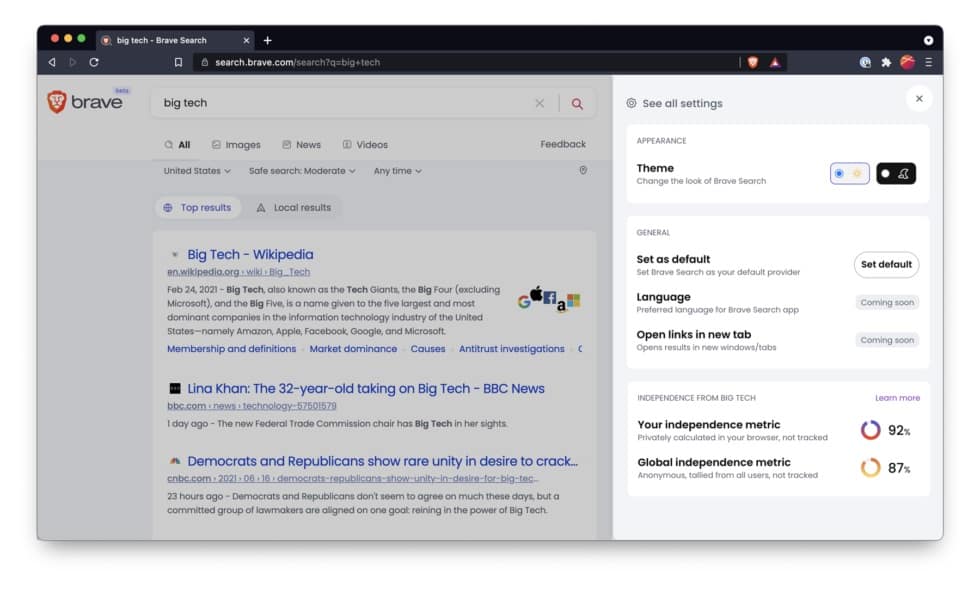 Brave has been testing Brave Search for several months now. In March this year, the company launched the new tool to users for preview access and testing. More than 100,000 users signed up for the early access, the company said. It has now launched Brave Search worldwide in public beta, taking on several established names in the industry, including Google Search and Microsoft Bing.

Brave Search will come integrated with the Brave browser and will become its default search engine later this year, probably after the new tool moves out of beta. Users of other browsers can also access Brave Search at search.brave.com. It’s unclear if the company plans to launch its search engine as a standalone app. We will keep you updated if/when more information emerges.

In the meantime, you can see a side-by-side comparison of Brave Search versus other search engines here.