Some of the Samsung Galaxy S21 FE specifications have just been confirmed in a Geekbench listing. The phone surfaced on Geekbench with the SM-G990B model number. That listing not only confirmed some of its specs, but its benchmarking results as well.

The phone scored 381 points in the single-core, and 1,917 points in the multi-core test. Do note that these are preliminary results, and it’s possible it does not offer final software. So, do take those benchmarking results with a grain of salt.

Having said that, this listing, that surfaced today, does confirm that the phone will be fueled by the Snapdragon 888 SoC. That was to be expected, as its predecessor initially launched with the Snapdragon 865.

The whole point of the ‘FE’ model is to offer the latest SoC, but cut corners in some other places, to keep the price down. That’s exactly what the Galaxy S21 FE will do, as it has proven to be the right move for the Galaxy S20 FE.

The Galaxy S21 FE will also include 6GB of RAM, like its predecessor. Some of us thought that Samsung plans to include 8GB of RAM inside the device, but that won’t be the case, it seems.

This listing also confirms that the phone will ship with Android 11, as expected. Samsung’s One UI skin will come pre-installed on Google’s OS, of course. That is pretty much all the spec info this listing shared.

A 4,500mAh battery will also be included

The Galaxy S21 FE will include a 4,500mAh battery as well, which is something a battery certification confirmed earlier. The phone is tipped to arrive in Gray, Light Green, Light Violet, and White color options.

The Galaxy S21 FE will most likely launch alongside the Galaxy Z Fold 3, Z Flip 3, Watch 4, and Watch Active 4. That is, at least, what the latest rumor suggested. All of those devices are tipped to arrive in August. 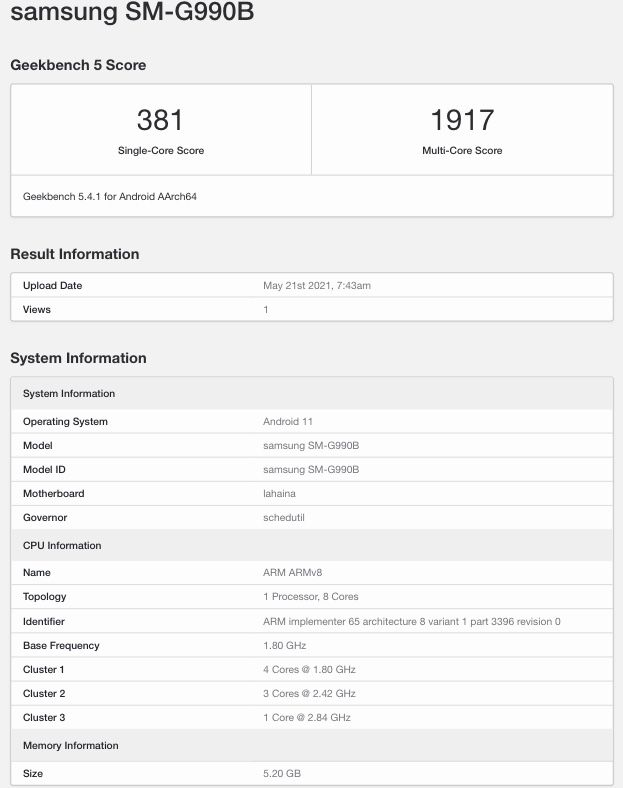