According to the Google Play Console entry, the new Lenovo tablet bears the model number TB-X607Z. The listing mentions a Qualcomm SM6350 chipset, which is the Snapdragon 690 5G. It is an 8nm octa-core processor featuring two Kryo 560 Gold cores clocked at 2.0GHz and six Kryo 560 Silver cores clocked at 1.7Ghz. The chipset gets an Adreno 619 GPU and an integrated X51 5G modem. Lenovo is also offering 6GB of RAM with the device.

This is a nice upgrade from a maximum of 4GB RAM and MediaTek Helio P22T (12nm) or Snapdragon 450 (14nm) chipsets found inside earlier Tab M10 models. Lenovo launched three tablets in the budget-focused Tab M10 series last year – M10 FHD (Snapdragon 450) in January, M10 Plus (Helio P22T) in March, and M10 HD 2nd Gen (Helio P22T) in August. The company is now preparing to follow up with a 5G budget tablet this year.

Much like all other existing devices in the series, the upcoming Lenovo Tab M10 5G should also sport a display diagonal of around 10 inches. The Play Console listing reveals that it would be an FHD panel with a resolution of 1200 x 1920 pixels.

The same Lenovo TB-X607Z also recently appeared on benchmarking platform Geekbench (via). The listings corroborate the Snapdragon 690 5G chipset, 6GB of RAM, and Android 11-based software. One Geekbench entry also hints at a 4GB RAM model of the Lenovo Tab M10 5G. It could be available in multiple storage variants as well.

Lenovo Tab M10 5G will bring 5G to the masses

Lenovo is one of the first names that come to mind when we talk about affordable Android tablets. The Chinese company may not have a strong foothold in the US but its budget-focused tablets lineup is worth a look. The upcoming Tab M10 5G is now shaping up to be another compelling proposition from the OEM.

The Play Console listing also contains a render of the Lenovo Tab M10 5G (see featured image above). It doesn’t tell a great deal about the new tablet but we can see the front side of it. It will have rounded corners and slightly thick but symmetric bezels around the display. The device seemingly gets a single front-facing camera. Nothing surprising here.

There’s no word yet on the pricing and availability of the upcoming Lenovo tablet. The recent developments suggest we aren’t too far away from an official announcement. We will keep you updated as and when we have more information. 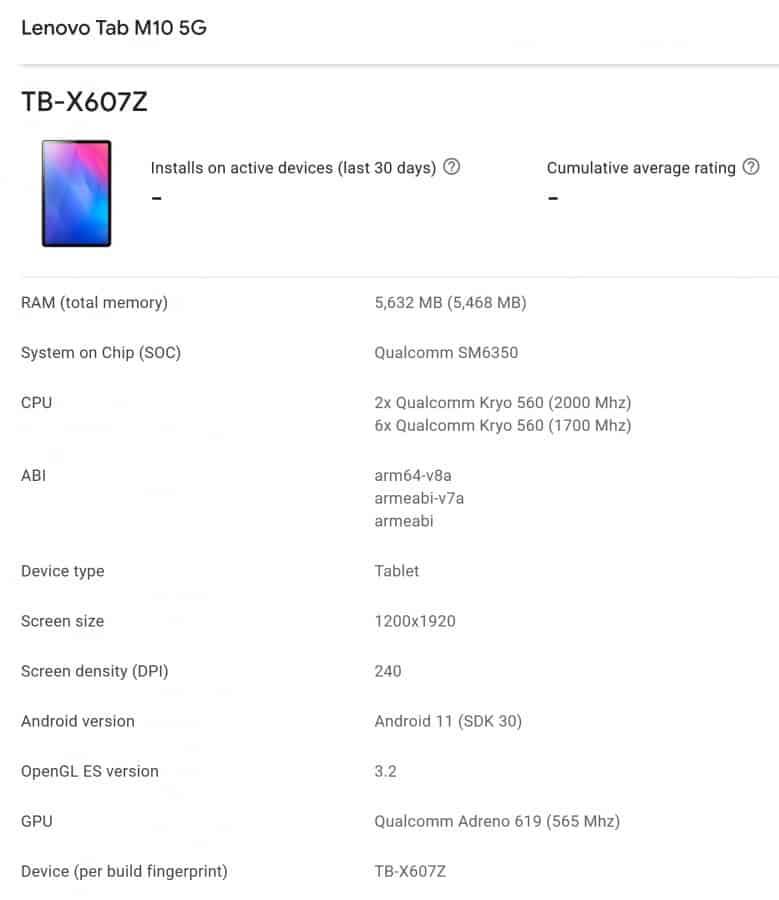