Huawei’s upcoming flagship smartphones, the Huawei P50 and P50 Pro appeared in renders earlier in March. Today, we have our first live look at the former, giving us a more clear look at the design. The new leaks come courtesy of a couple of reliable tipsters from China also reveal some of the key specifications of the phone.

As you can see in the attached images below, the Huawei P50 gets a flat display with almost symmetric bezels. The display is said to measure in at 6.3-inches diagonally. And unlike last year’s model, Huawei has opted for a centered punch-hole front camera for its upcoming flagship smartphone. The Huawei P40 has a pill-shaped dual-camera module on the top-left corner of the display. Reports suggest that the Huawei P50 will use Sony’s 1-inch IMX 800 image sensor for the primary camera. It would be the largest image sensor on a phone to date. The other three cameras are expected to be an ultrawide lens, a telephoto lens, and a 3D ToF cam. Spec details of these sensors are not known as yet.

Note that the devices shown in these leaks are not functional phones but prototype models (via). However, the images give us our first live look at the design of the upcoming Huawei P50 smartphone. 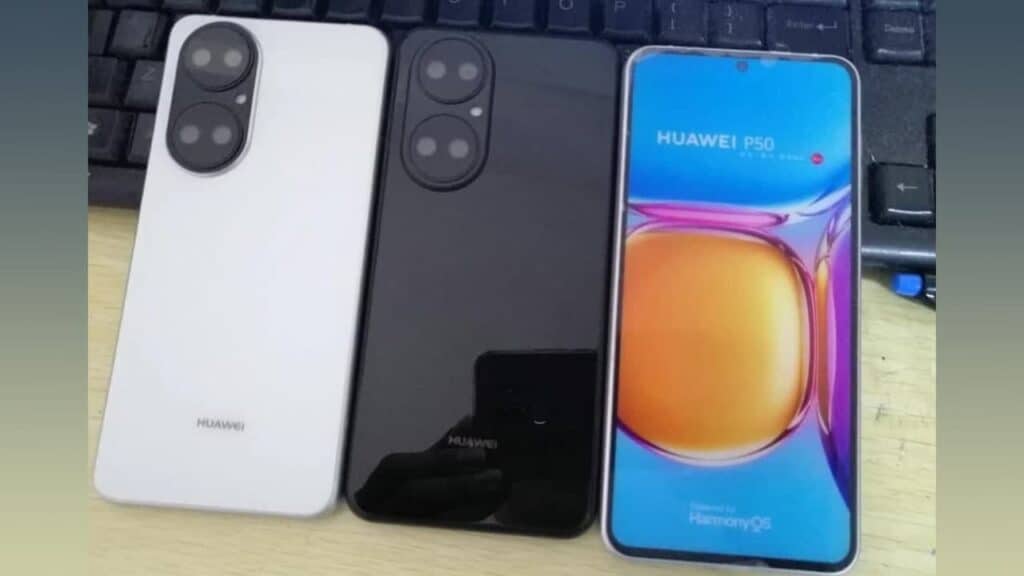 If you look closely at the attached images above (above below), you’ll notice a HarmonyOS logo at the bottom of the display. This more or less confirms that the Huawei P50 series will run the company’s in-house operating system, at least in China.

The beleaguered Chinese giant has had to come up with its own mobile OS since the US sanctions restricted its access to Google’s Android. Some of Huawei’s older Android-powered smartphones can already run HarmonyOS beta. The Huawei P50 series was said to be the first phone to come with HarmonyOS out of the box, entirely skipping Android. The recent leaks pretty much confirm that.

Huawei is reportedly preparing to launch the P50 series sometime in June. The vanilla P50 will be accompanied by the P50 Pro and P50 Pro+, all powered by the Kirin 9000 chipset. We will likely see more about these phones in the coming weeks.