Google has quietly but not so subtly confirmed the existence of the Pixel Buds A, but they’re not quite available yet.

In a tweet on the official Android Twitter page, the team says that its cheaper Pixel Buds A have arrived, which would lead you to believe that the true wireless earbuds are available. But, they’re not. Not yet anyways.

If you head on over to the Google Store, the Pixel Buds A aren’t listed as a product you can buy. At the time of writing the only pair you can purchase is the regular model in various colors. Thi does probably mean though that the availability of these earbuds is just around the corner.

As of right now Google has not yet mentioned anything about a price or when you can place an order.

Pixel Buds A earbuds are not yet available

Visually these don’t look a whole lot different from the normal earbuds. The design is the same save for some adjustments Google made to color. For example, the black part of the regular model is white on the A model. It’s also likely that these will end up with less features.

Google will after all very likely sell these at a lower price point than $179. And cutting features would be the easiest way to lower the cost to consumers.

Worth noting is that the tweet seems to have been pulled down at this point. So it Google may have accidentally leaked the earbuds before it was ready to announce them. You can view that tweet and the accompanying image below.

The new earbuds will support fast pair on Android 6.0+

Google doesn’t mention anything about features, but it does highlight that fast pair will be supported on these new earbuds.

This will also work for any phones that are running Android 6.0 or later. Which is nearly all Android phones at this point. Since the original tweet was removed, it’s reasonable to assume Google did not mean to announced the Pixel Buds A. And if that’s the case an actual official announcement could be coming up.

Perhaps the next time with price and release dates. Having said that, expect to hear more about these earbuds in some capacity at the upcoming virtual Google I/O event. 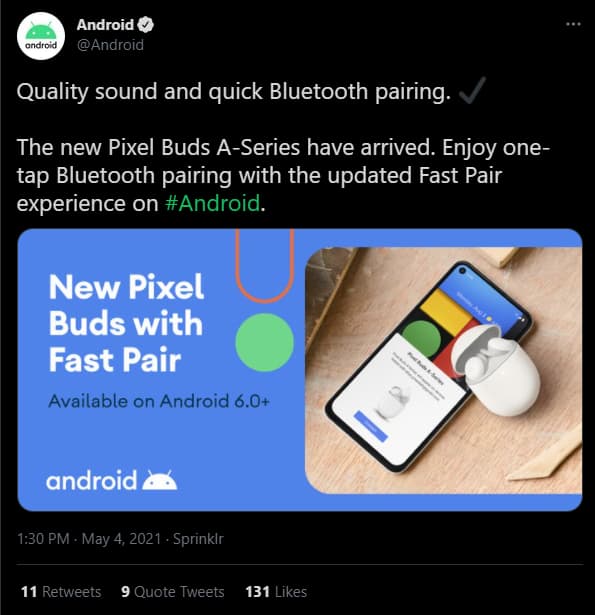