The Samsung Galaxy S21 Ultra was the best-selling Android phone by revenue in Q1 2021. According to the latest data estimates by research firm Counterpoint Research, the top-of-the-line Galaxy flagship accounted for three percent of the total global smartphone revenues during the first three months of the year. The other two Galaxy S21 models – the vanilla Galaxy S21 and the Galaxy S21+ – also featured in the top ten.

The Galaxy S21 series sold like hotcakes in its early days in the market. Sales of the new phones in the US had doubled over the Galaxy S20 series during the first six weeks of launch. One of the main reasons behind this overwhelming popularity is a lower starting price. Samsung launched the Galaxy S21 series at a cheaper price than last year’s models. The entire lineup saw a price drop of $200 this year. The company apparently managed to reduce the manufacturing cost of the new models by up to 13 percent and did well to pass on that benefit to the consumers.

Of course, the Ultra is still the most expensive of the three but the amount of tech it packs is also worth every penny. It sold more than its two lower-end siblings in the US and Europe, Counterpoint says.

Another notable finding of this report is that eight of the top ten models are 5G capable, except the iPhone 11 and iPhone SE 2020. This shows that 5G adoption has grown significantly in several parts of the world.

Despite the popularity of the Galaxy S21 series, none of the phones managed to break into the top ten list for the best-selling phones in Q1 2021 though. The chart is once again dominated by Apple’s iPhones. The same four iPhone models take up the top four spots. The remaining six spots are captured by Android devices but none of them are flagship models. Xiaomi’s Redmi 9A, Redmi 9, and Redmi Note 9 take up the fifth, sixth, and eighth spots respectively. Samsung’s Galaxy A12, Galaxy A21s, and Galaxy A31 capture the other three spots. 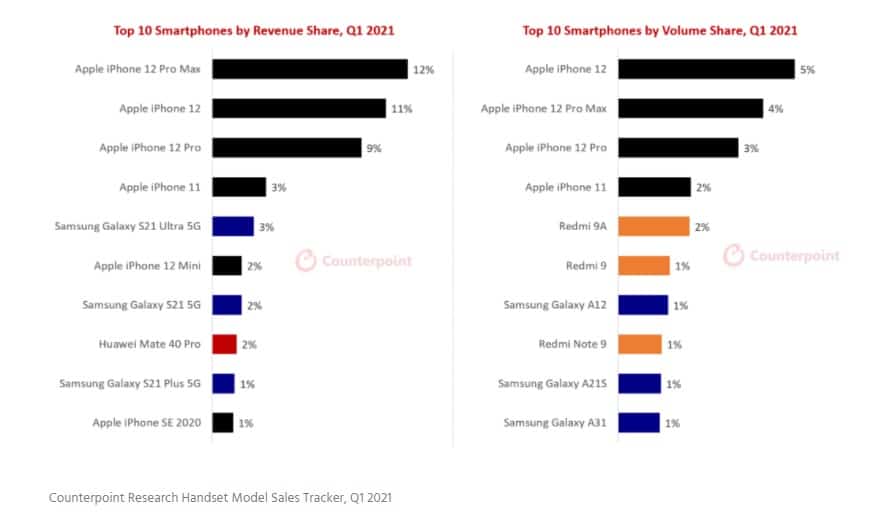