This comes after years of manufacturers attempting to keep customers from repairing their devices via third-party businesses. According to iFixit and others, the way manufacturers design products force owners to use the manufacturers’ repair services. As a result, competition takes a hit because smaller repair businesses can not compete with the big dogs.

The report states that “there is scant evidence to support manufacturers justifications for repair restrictions.” There are some pretty substantial findings in the report that the FTC came upon. First, the FTC says that “Warranties are being routinely voided, in violation of the Magnuson Moss Warranty Act.

The FTC says they “take these allegations seriously and will continue to address illegal practices in the marketplace.” Another finding is one that the FTC says can affect certain communities. Specifically, they say “the burden of repair restrictions may fall more heavily on communities of color and lower-income communities.”

iFixit’s CEO Kyle Wiens had this to say about the decision. “This is a great step in the right direction. The bi-partisan report shows that FTC knows that the market has not regulated itself, and is coming to real action.”

A pledge to enforce solutions to repair restrictions has also been taken up by the FTC. The pledge is “to address unlawful repair restrictions, the FTC will pursue appropriate law enforcement and regulatory options, as well as consumer education, consistent with our statutory authority.”

Those who have been following the right to repair movement should be happy. Having the FTC on their side is a huge sigh of relief. No longer do they have to worry about the warranties for their devices being voided.

The repairing community has been wanting the FTC to take action for years. The “Nixing the Fix: An FTC Report to Congress on Repair Restrictions covers and summarizes problems that face the consumers.

These problems are caused by manufacturers who control the market by utilizing monopoly strategies. They do this by creating product designs that complicate or prevent repair, and hard to get parts and repair information.

These monopoly strategies also thrive from designs that make independent repairs less safe, policies or statements that steer consumers to manufacturers repair networks, and more. These practices make it tough for consumers to repair their devices elsewhere.

But, the FTC is pledging to stop this. The report also explains a few ways that the FTC could stop manufacturers from suppressing consumers’ right to repair. The commission says that they will aggressively enforce the Magnuson-Moss Warranty Act against manufacturers. They also want consumers to report any company that violates the act by illegally voiding the consumers’ warranties.

That’s not all though. The commission also endorses creating new rules under Section 5 of the FTC Act. Doing this prohibits unfair repair restrictions. Lastly, a promise to support legislative efforts towards Right To Repair by pledging to work with lawmakers at the state and federal level.

The promise is “to ensure that consumers and independent repair shops have appropriate access to replacement parts, instructions, and diagnostic software.

It is good to see that the FTC is making plans to better support the right to repair. Being able to go to a third-party repair company can often be cheaper than first-party options. This will help keep competition healthy. 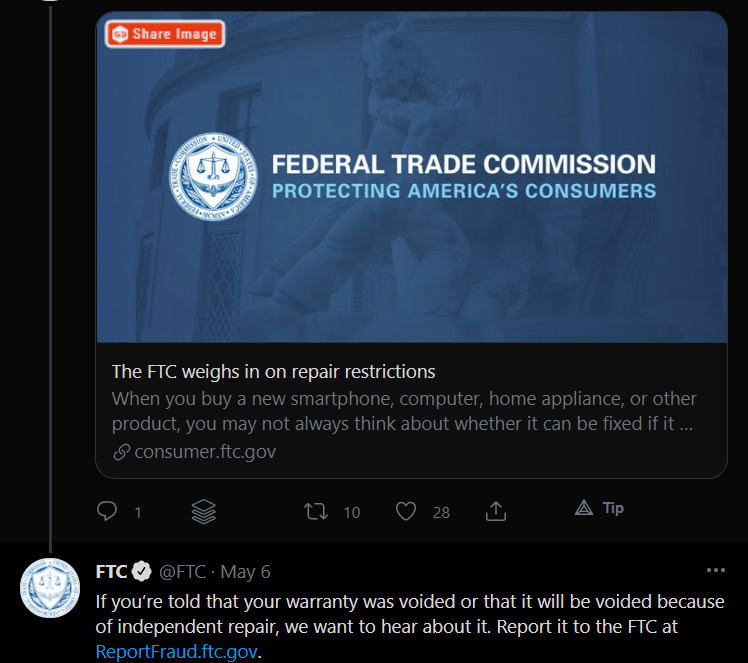