This Google Phone Caller ID feature will show you some basic information such as the caller’s name, and number for incoming calls. Notably, it will be available for non-Pixel phones as well.

Apparently, Google keeps some features exclusive for its Pixel series phones. But it releases these features, after some time for non-Pixel devices. The latest one being the caller ID feature for the Google Phone app.

FYI, the Google Phone app is the default dialer app for Pixel devices. Later, back in September 2020, Google released the Phone app for all Android users.

However, it was missing out on some features, the caller ID feature was among them. Fast forward to now, as per a report by XDA, the Google Phone app is receiving the much-needed Caller ID feature.

This new feature appears as “Caller ID announcement” under the Phone app. As noted by XDA, it was previously buried under the Advanced Settings menu.

Tapping the “Caller ID announcement” settings opens up a new page that has a single option. The “Advanced caller ID” option lets you enable the Caller ID feature. You can choose to enable this feature for three settings.

You can enable Caller ID for all calls while using a headset or completely turn it off. Once you have enabled this feature, it will show you the caller’s name or phone number for incoming calls.

Well, this Caller ID feature is like a double treat for the Google Phone app users. Because recently, Google pushed the call recording feature for the Phone app.

The call recording feature automatically records the incoming calls from unknown numbers. This is quite a nifty feature for various scenarios. For instance, you now do not need to write down the phone number or address. You can simply hear the recording to get the number.

It is a basic update, which should have been bundled with the Phone app when it was released for all Android devices. But as they say, better late than never.

The Google Phone Caller ID feature is now available with the latest version of the app. If you haven’t received the update, then you should probably check for the update via the Google Play Store. 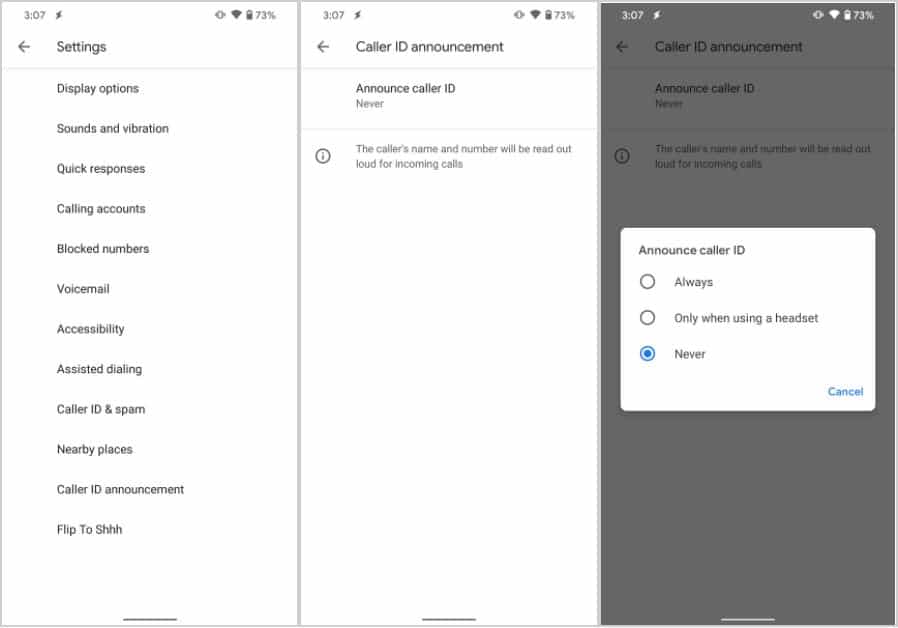