Google has been working on a new operating system called Fuchsia OS for quite a few years now. The company has made a lot of progress over the years but the new platform is yet to make its debut on real devices. Well, it appears we might finally see a Fuchsia-powered device arrive in the not-so-distant future. The evidence comes from a new listing on the Bluetooth Special Interest Group (SIG) website.

First spotted by 9to5Google, Bluetooth SIG has recently certified a new Google product running Fuchsia OS. The device in question is the Google Home Hub. So, technically, it’s not a new device but a re-list of an old device – Google Home Hub was launched in 2018 and was later rebranded as Google Nest Hub. A second-gen Nest Hub arrived earlier this year.

However, it’s not the device we are interested in. The “Software Version Number” row on the listing reads “Fuchsia 1.0” and that’s an interesting development. It’s unclear whether “1.0” is just a placeholder or it refers to the initial “M1” release. Either way, it’s evident that Google is slowly but steadily progressing with the development of Fuchsia OS.

Fuchsia has appeared on the Bluetooth SIG website in the past as well. Its Bluetooth software stack, which is codenamed “Sapphire,” received approval in August last year. Today’s entry even includes a reference to that earlier listing (via).

Google’s work on Fuchsia OS first came into the limelight in August 2016, when a mysterious codebase post was published on GitHub. Unlike Linux kernel-based Android and Chrome OS, this open-source platform is based on the Zircon kernel (formerly Magenta). It is capable of sunning on universal devices. So from dash infotainment systems for cars to embedded devices, smartphones, tablets, and PCs, Fuchsia OS could power them all.

However, the progress has been rather slow so far, sometimes giving an impression that the project may be dead.  But it’s still alive and kicking. The recent Bluetooth certification for the Google Home Hub/Nest Hub running Fuchsia OS is another evidence of it.

The original device runs Google’s Cast platform. So Google seems to be testing its new OS on the old hardware. It could be a modified device for testing Fuchsia OS as well as giving developers a real device to test their apps on. However, considering the speed at which Fuchsia OS has developed over the years, it might still be some time before the new platform reaches the next big milestone – make its debut on real devices. 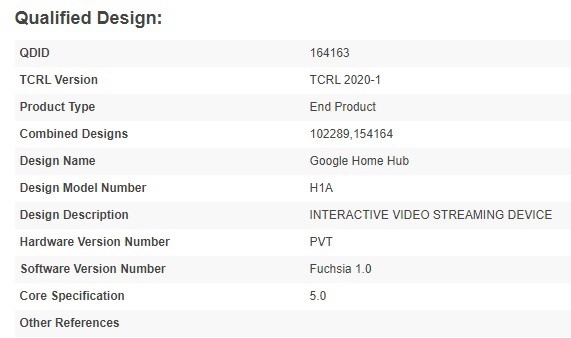