It was the need of the hour, and it seems like WhatsApp has put the correct gears now. According to WABetaInfo, WhatsApp is currently testing out a chat history transfer feature between iOS and Android.

WhatsApp chat history transfer between iOS and Android is one of the most popular features that several users had on their wishlist.

Well, you can easily transfer your WhatsApp chat history between two devices running on the same OS. However, it was simply impossible to transfer your chats between iPhones and Android devices.

Apparently, this was also one of the reasons people preferred upgrading to a new smartphone of the same OS rather than switching over to a new one.

WABetaInfo reports the WhatsApp chat history transfer feature is a part of strategic change within the WhatsApp app. Moreover, this will also negate the need of using any third-party apps like WhatsApp Plus, etc. that violate the terms of service.

Besides, the company has been actively exploring new possibilities of using the popular messaging app on multiple devices at the same time. And allowing a chat transfer feature between two different OS is a part of it.

That’s just it. WABetaInfo has also shared a screenshot of this new feature. Notably, the screenshot shows an iPhone and an Android phone placed next to each other.

On the top of the caricatures, you will find the “Move chats to Android” feature. The page says that in order to transfer WhatsApp chat history from iOS to Android, you need to update to the latest version of the app.

Similarly, if you wish to transfer your WhatsApp chat history from Android to iOS, then you need to update to the latest version of the app from the App Store.

Note that this feature is currently under development and will arrive with a future update. However, just like every other feature, we do not know when it will see the light of the day.

Though it is one of the most requested features from WhatsApp users, it is interesting to see WhatsApp finally putting some effort into addressing it.

Other apps like Telegram, etc. allow the transfer of chat between iOS and Android. For now, you can make use of some third-party apps to move chat history from Android to iOS, and vice versa.

But WhatsApp rightly advises against using such apps as they could post potential security risks, and they violate the Terms of Service. 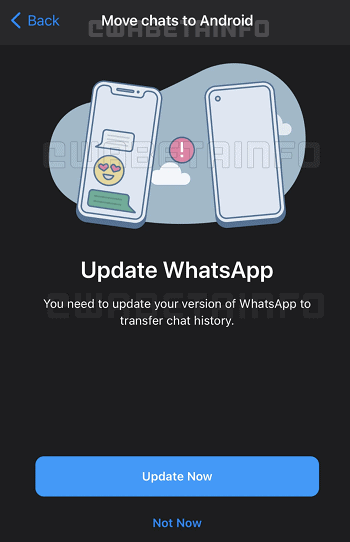