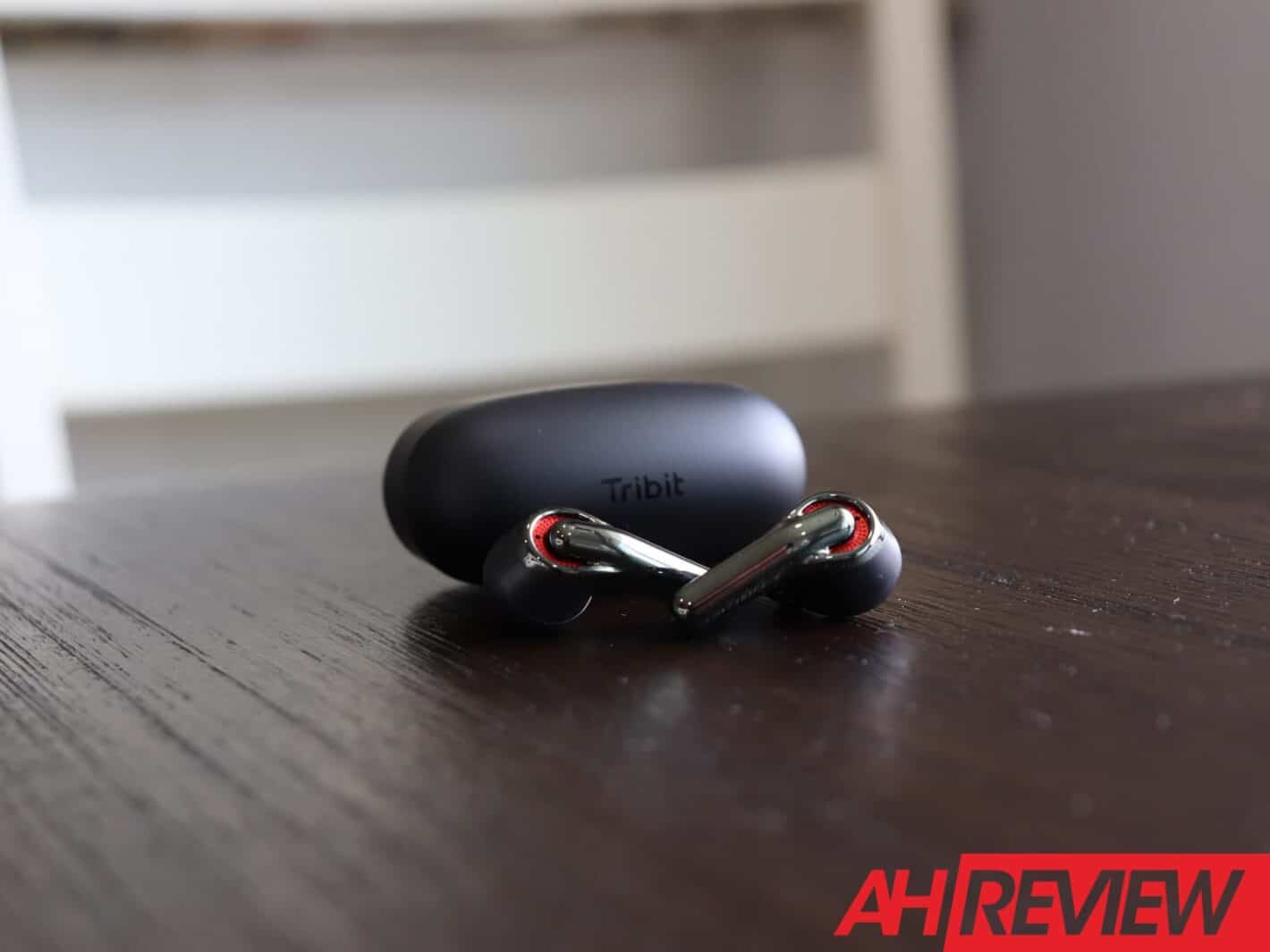 Tribit has rapidly risen to become one of my favorite brands for audio devices. So, when the company recently offered to ship out its Tribit FlyBuds C1 earbuds for review, I jumped at the opportunity. And, at under $70, I prepared myself to be amazed yet again by this company’s audio prowess.

Suffice it to say, of course, I wasn’t disappointed. The audio does punch harder and with a greater reduction to background noise than I had expected. But these aren’t the audiophile-like budget buds I was hoping for either. And there are several areas where Tribit really needs to improve if it wants to push out a second iteration.

None of that is to say that anybody, in particular, wouldn’t be perfectly happy with FlyBuds C1. As noted above, for under $70, finding brilliant earbuds is going to be a task, in and of itself. But these truly wireless earbuds need a closer look. So let’s dive in and see if these will be right for you.

Now, the best part of buying anything from Tribit is that they always include everything you’ll need to get started. That’s except for a power brick since almost no headphone OEMs include those. And, during my review of Tribit FlyBuds C1, that was no different.

The company includes a USB-C charging cable — there’s no wireless charging to be found here — as well as no fewer than 6 earbud tips, the charging case, and the earbuds. But, unfortunately, my experience on the hardware front was mixed.

On the one hand, the earbuds themselves are striking, lightweight, and small enough to be incredibly comfortable and stylish. But the earbud tips here, unlike many others I’ve reviewed, are dust magnets to the extreme.

And I don’t mean that they pick up air-borne dust as easily as any other tips. Not only did the tip pick up dust and particulates floating around my home. I accidentally dropped them in a pile of dust during my review and they became caked in the stuff. Well beyond anything I’ve seen in similar situations with other buds. So these are undeniably going to be difficult to keep clean.

The case was similarly likely to be a dust attractant, despite its matte black finish keeping fingerprints away. 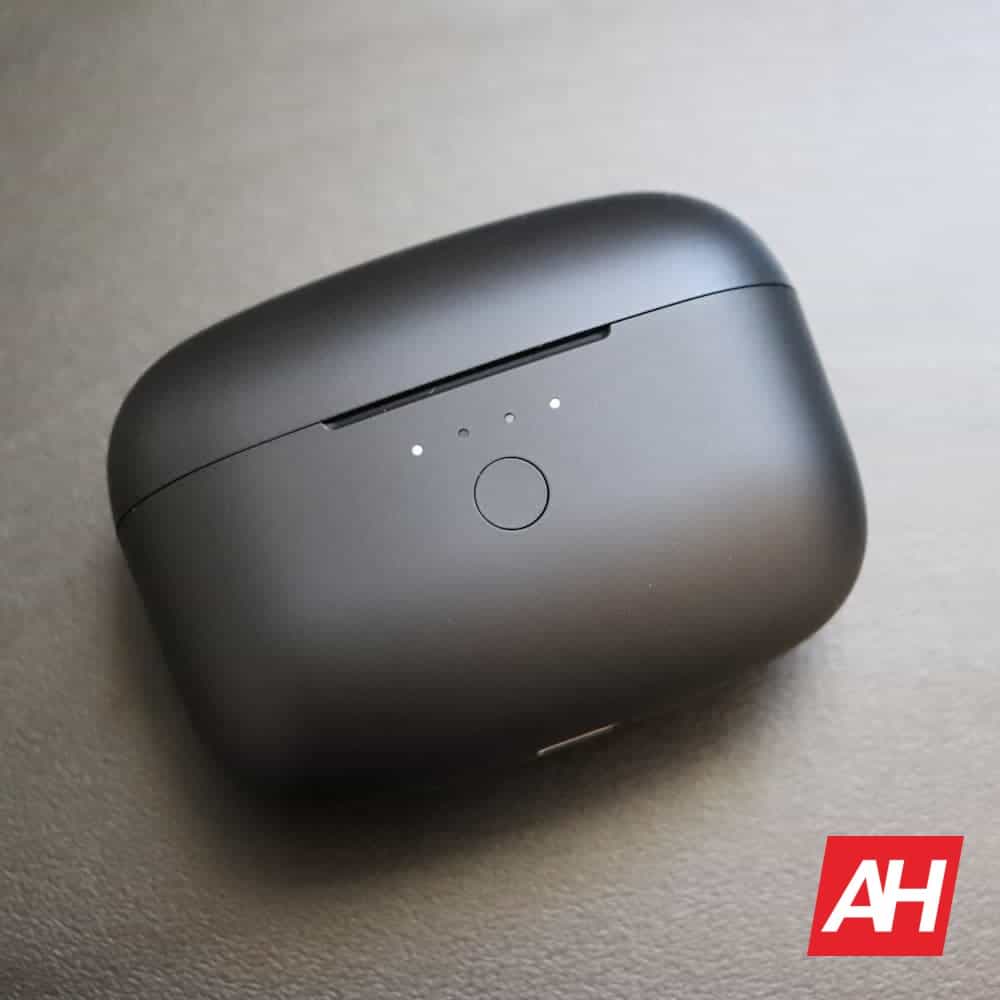 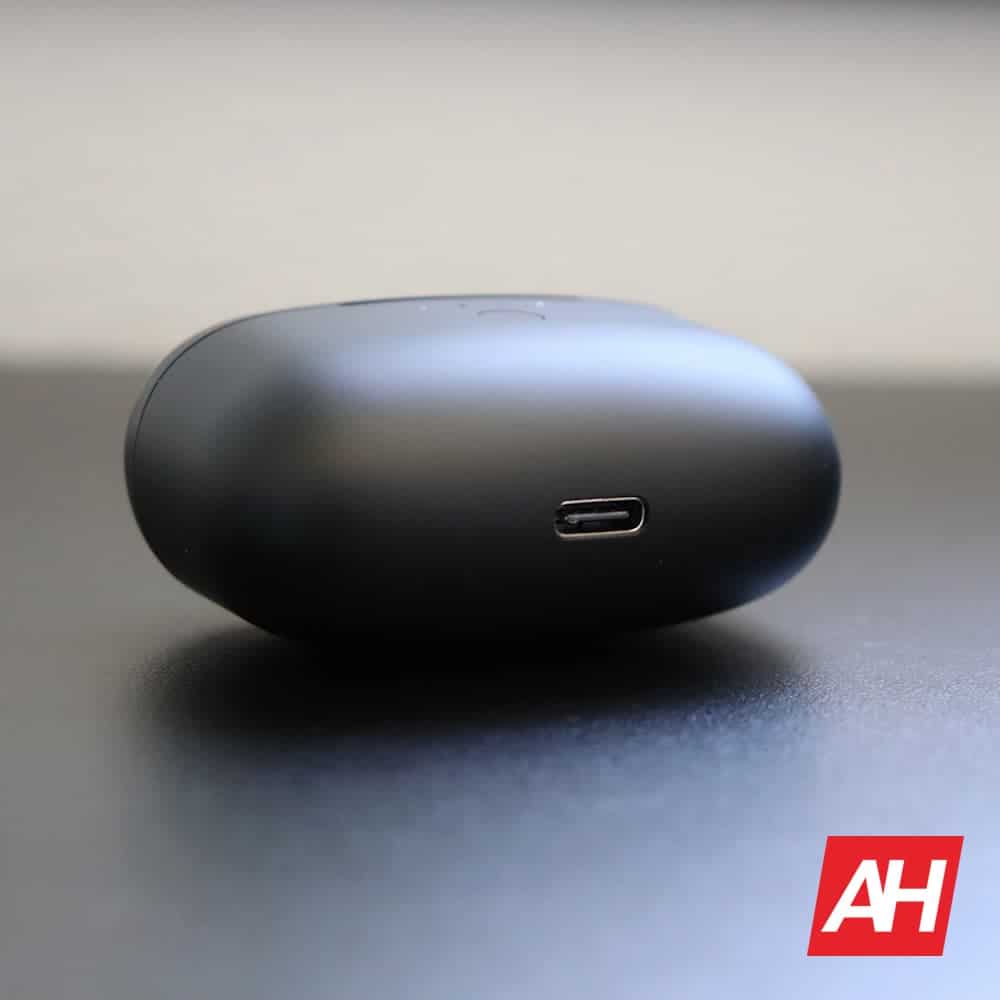 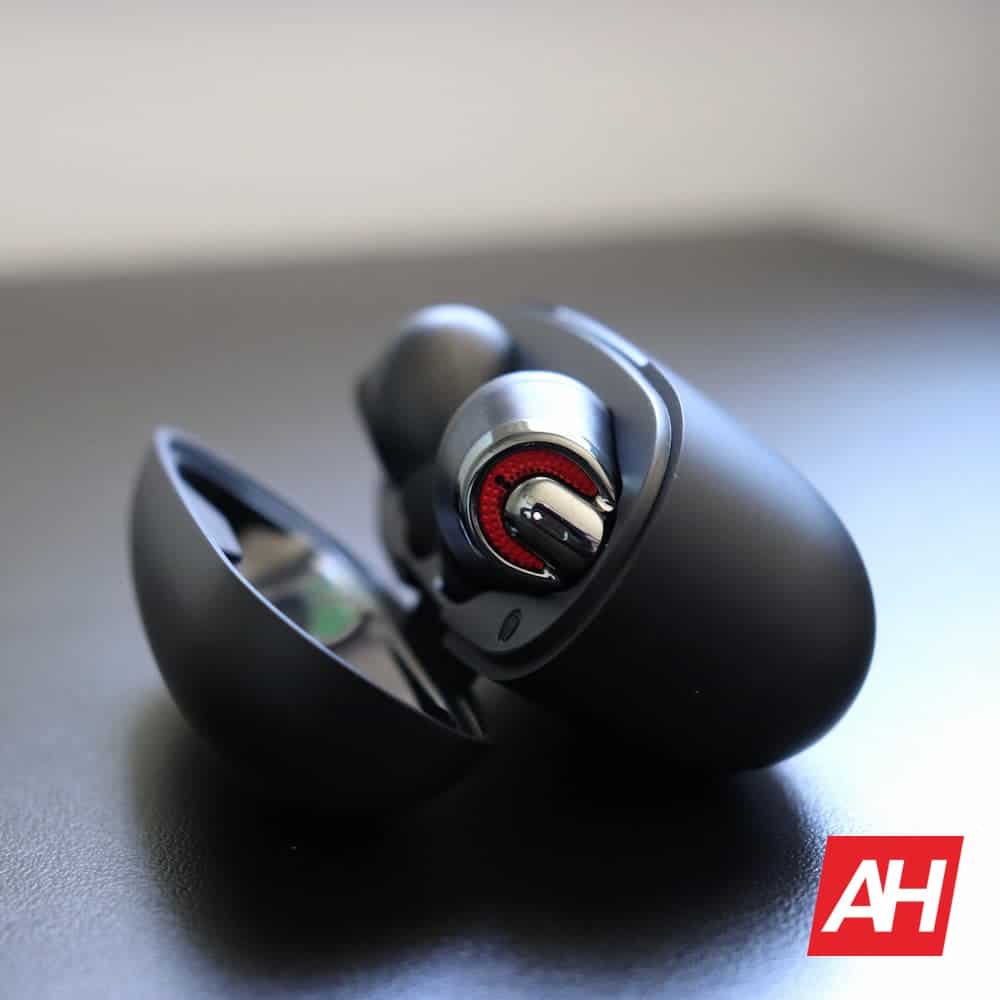 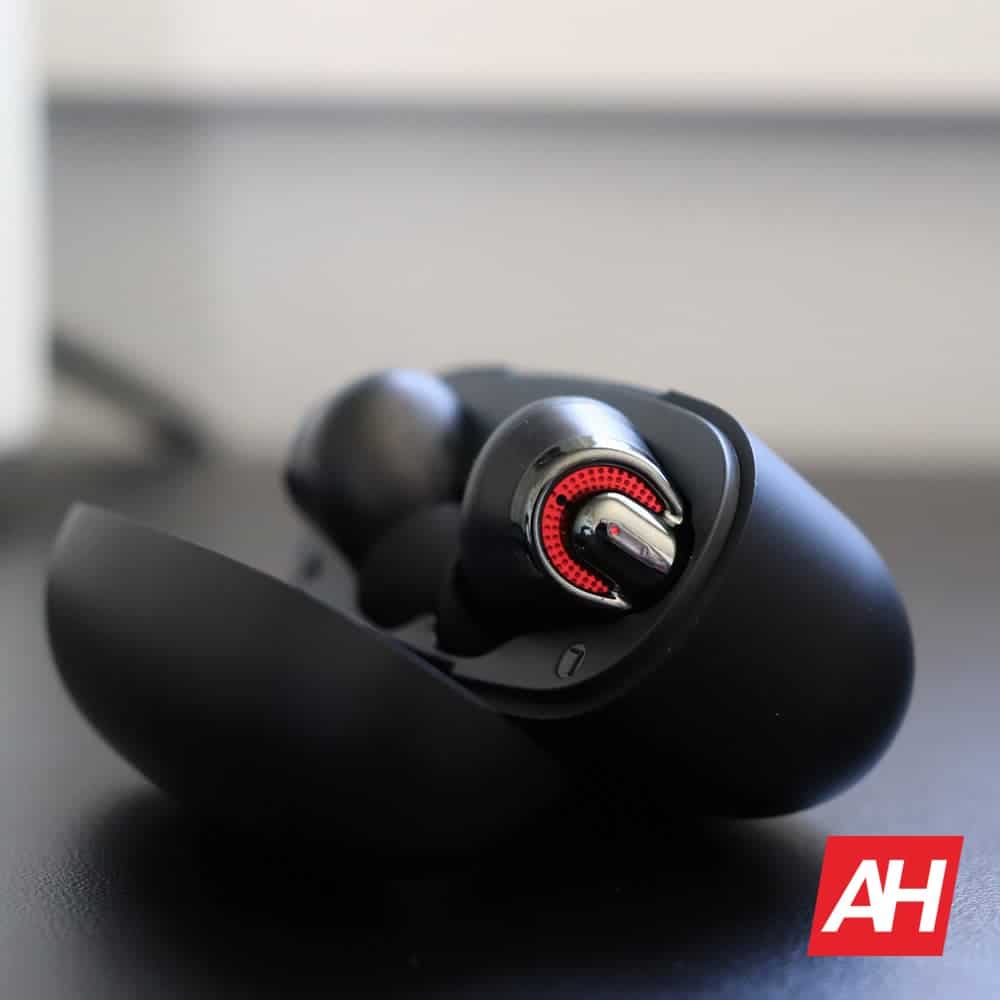 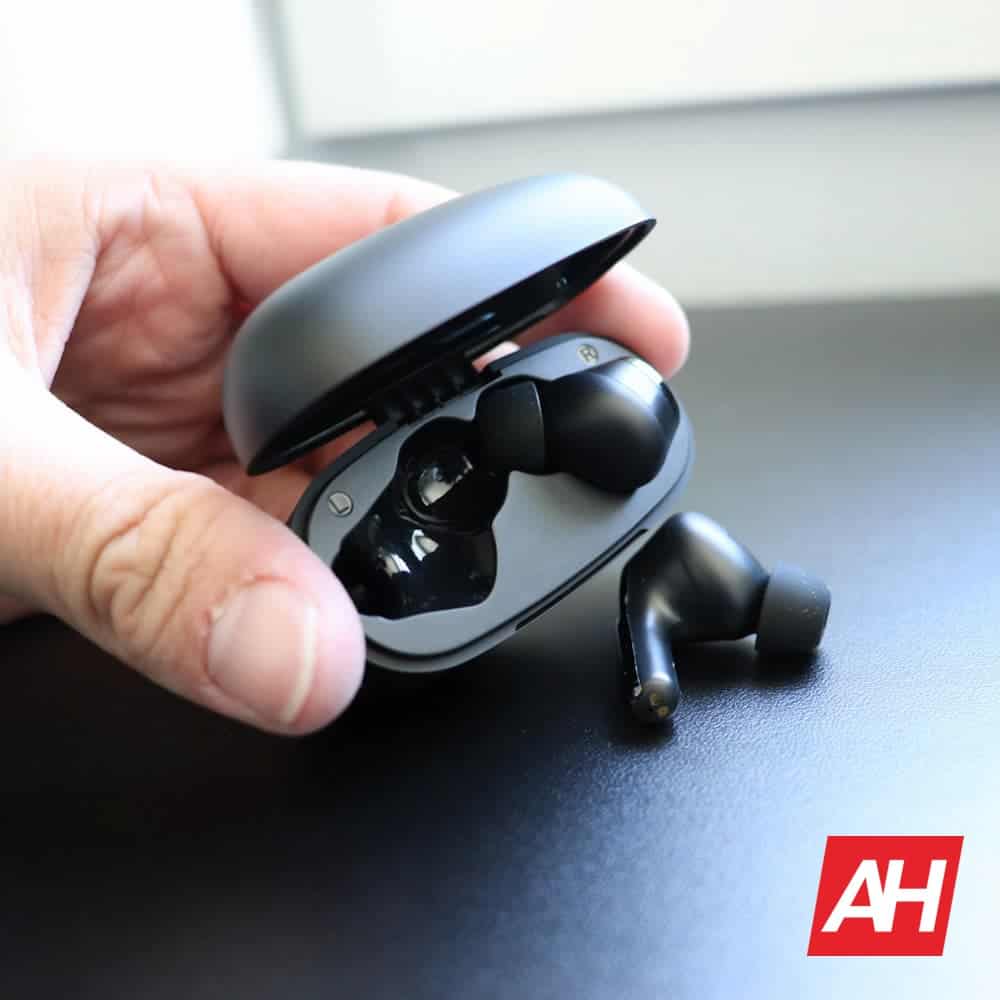 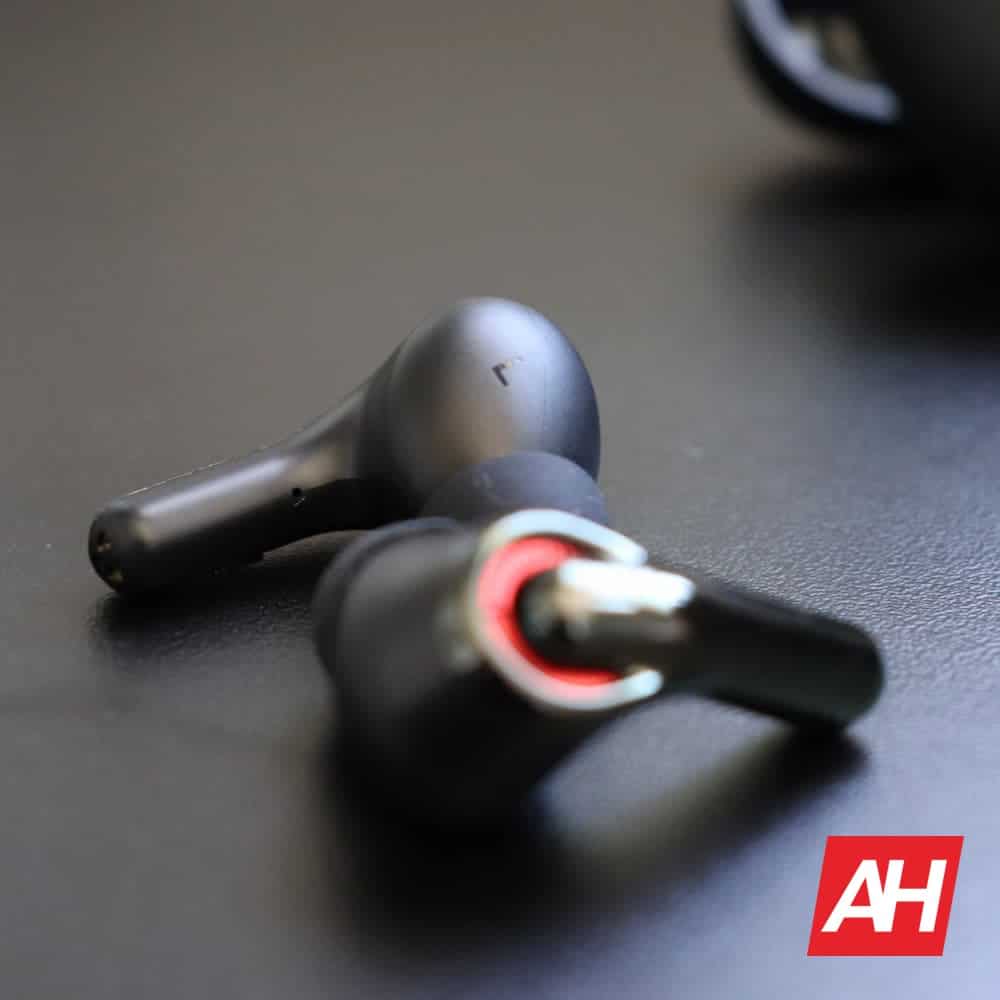 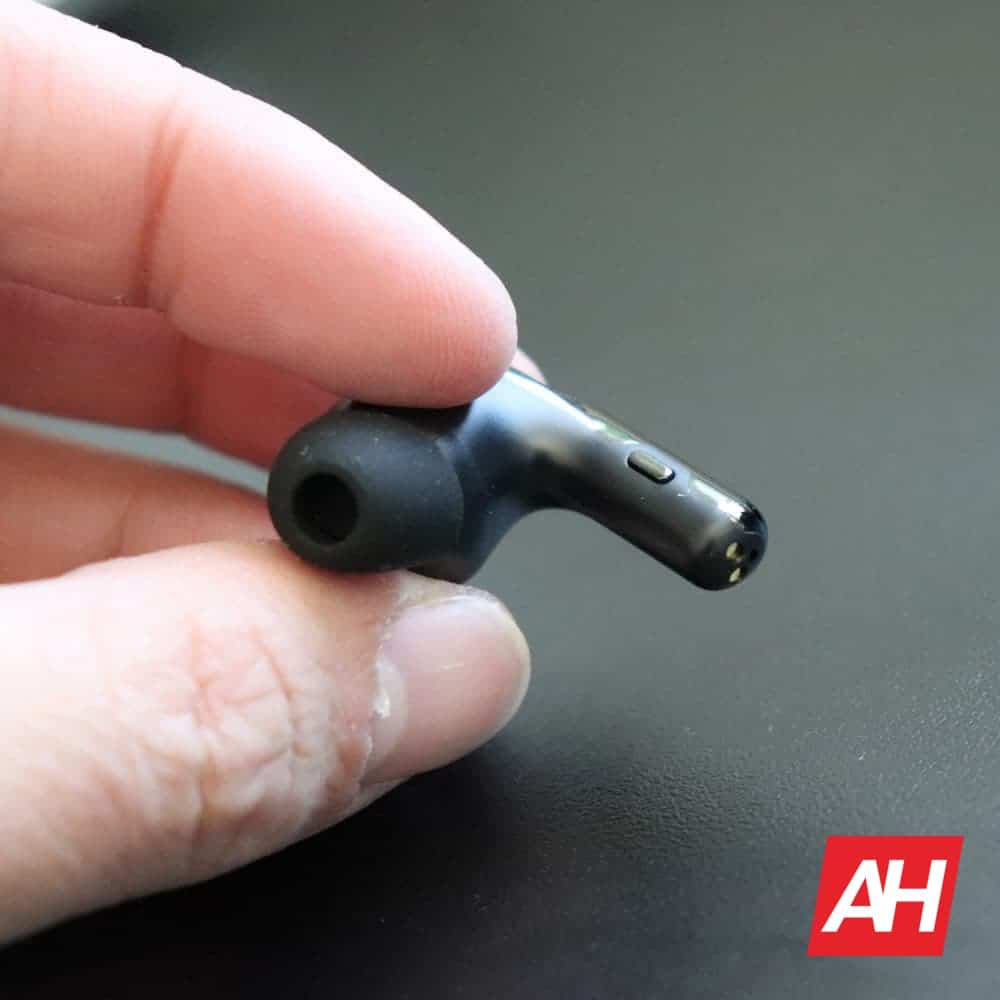 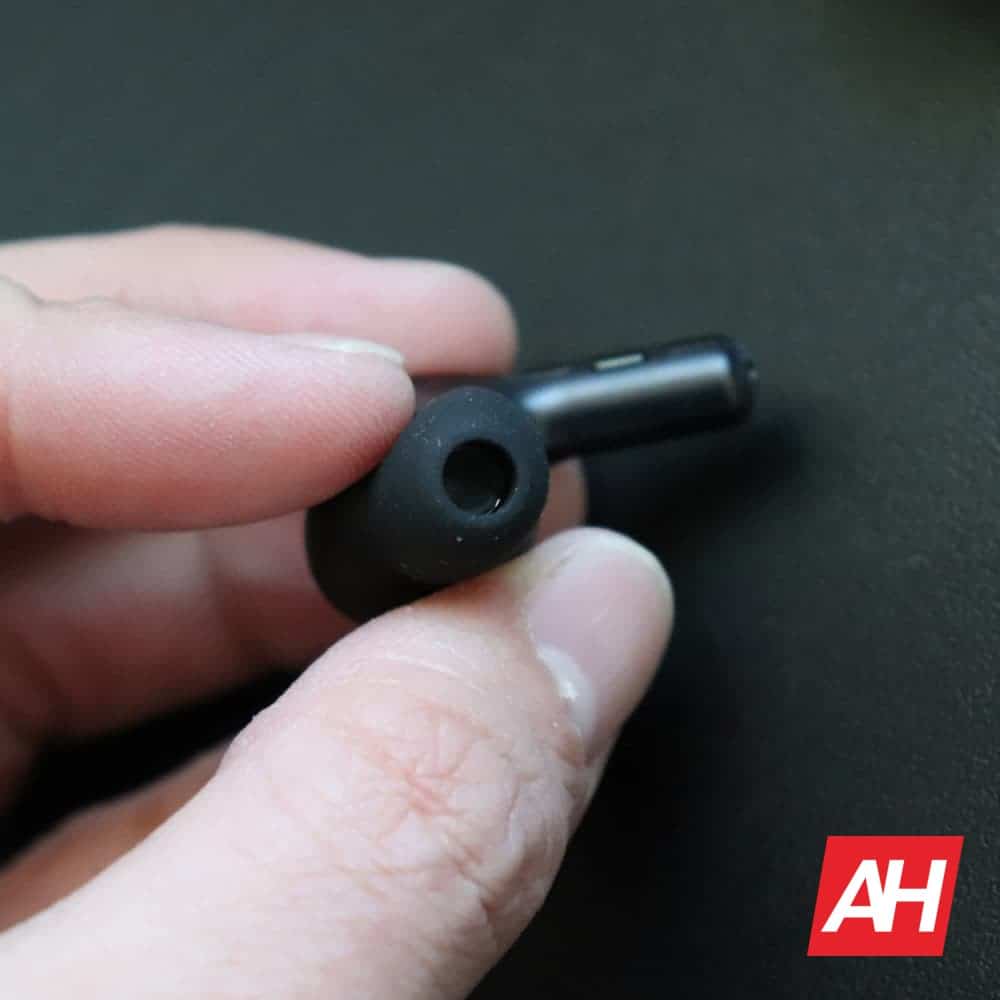 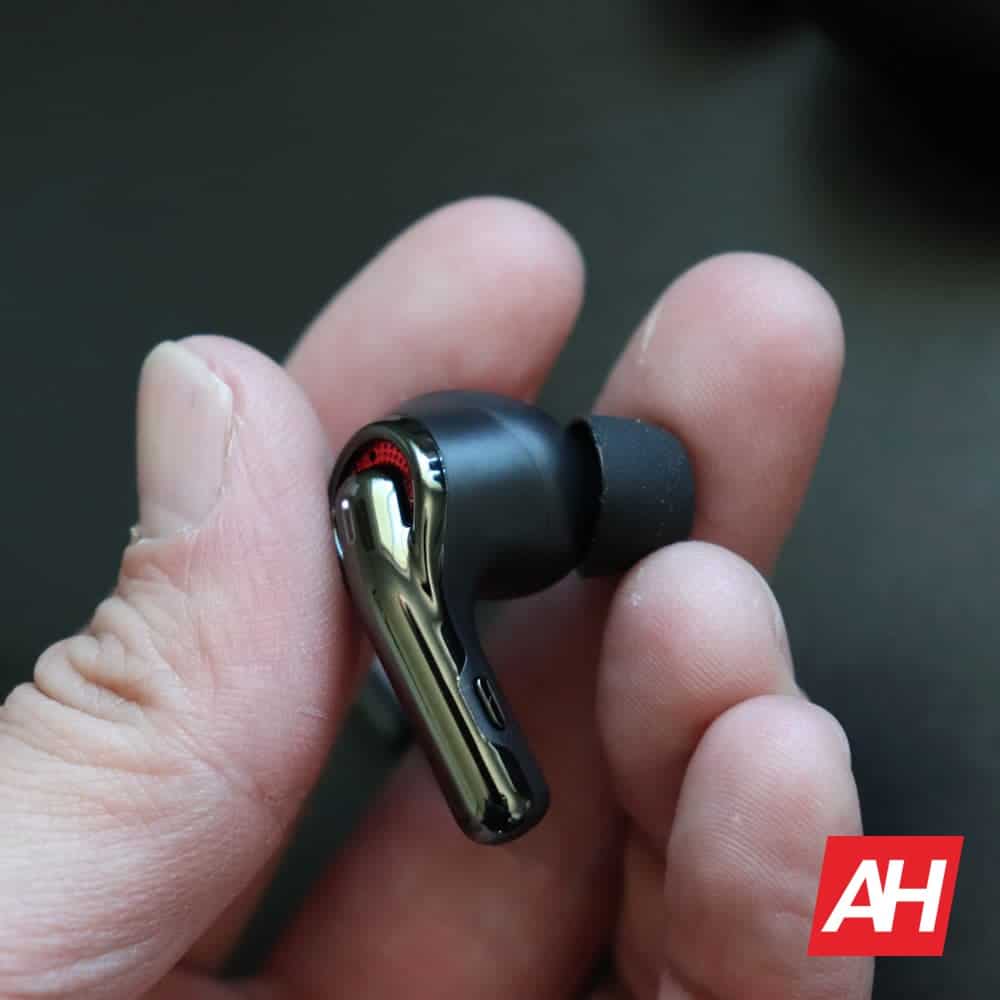 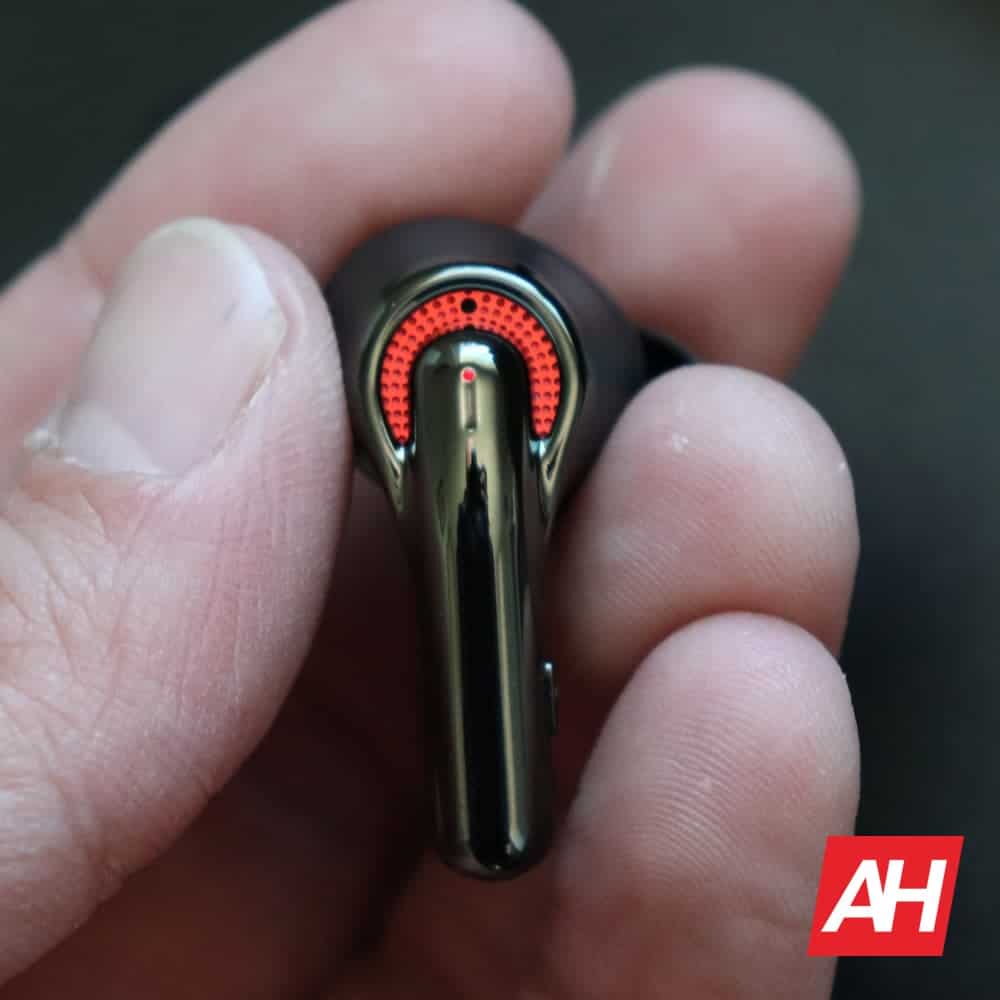 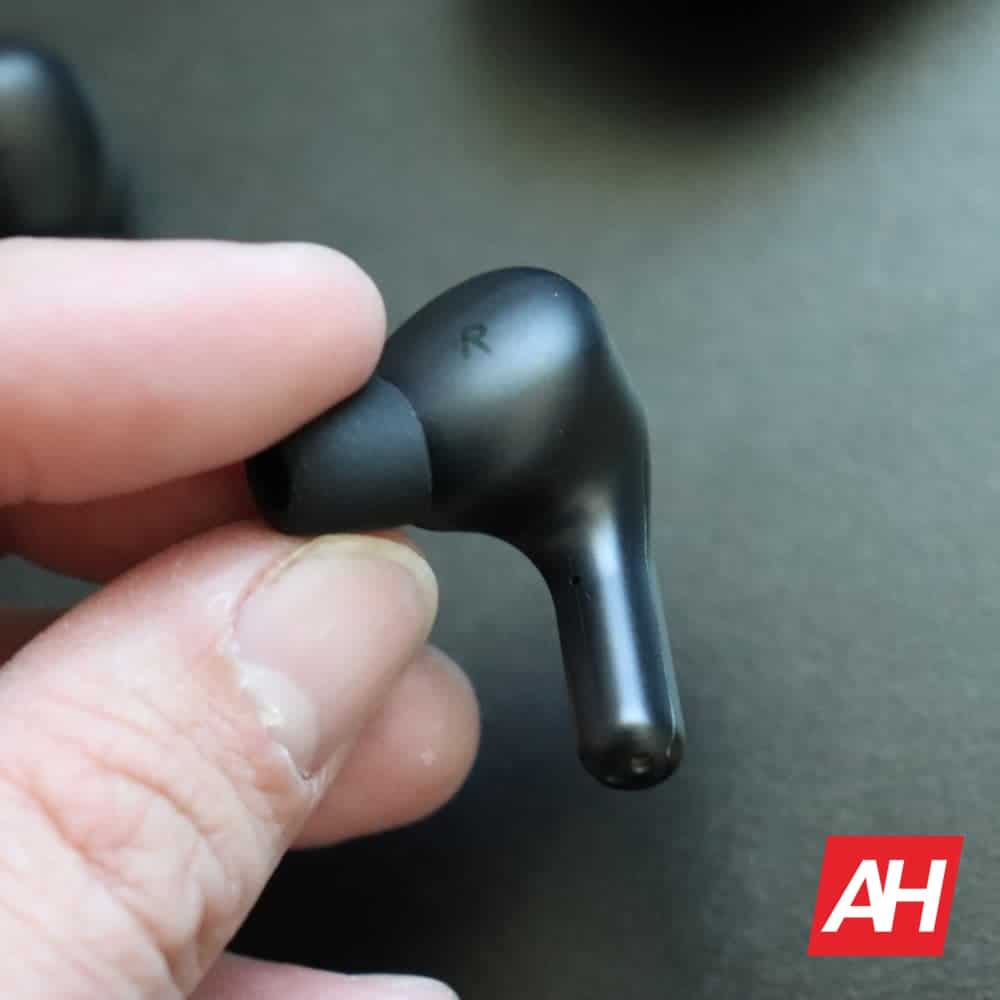 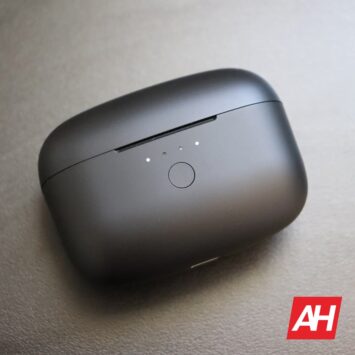 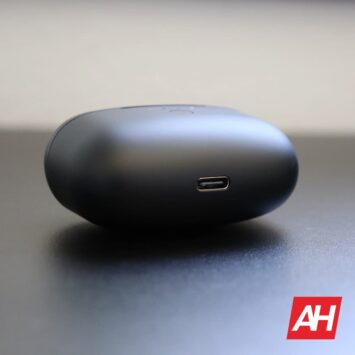 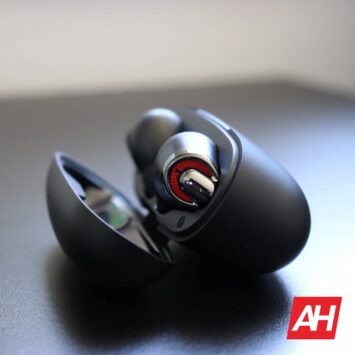 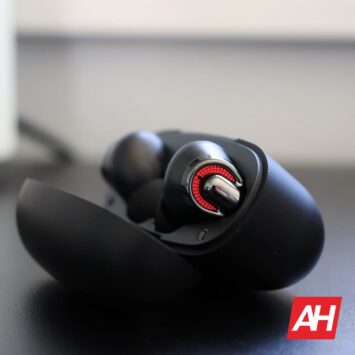 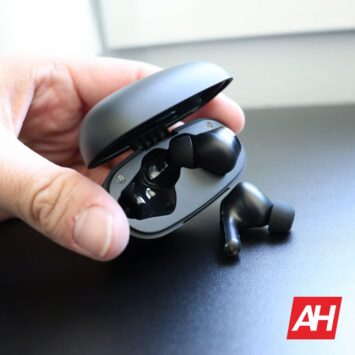 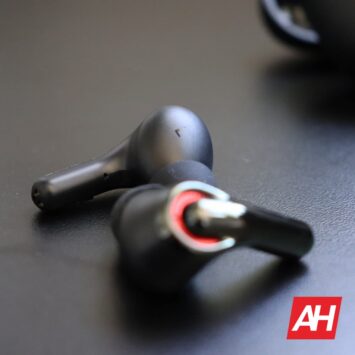 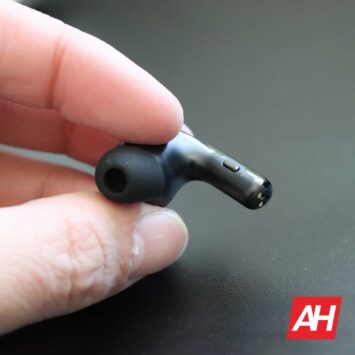 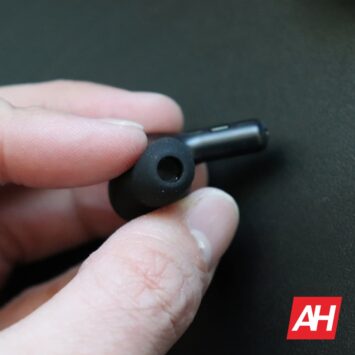 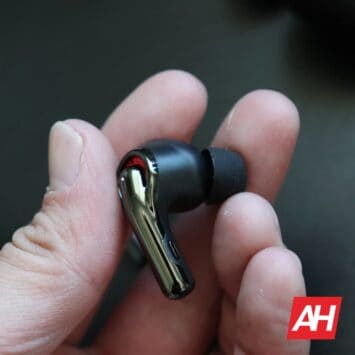 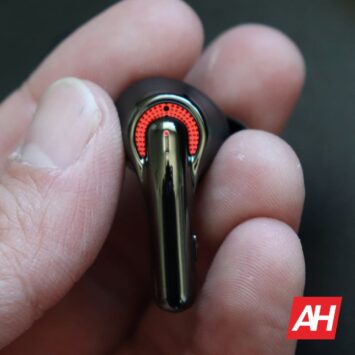 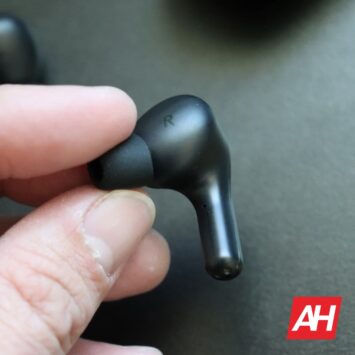 That means that the earbuds themselves are more comfortable but less easy to keep clean. The button on the buds seems well designed too, with a satisfying click when pushed. Just as the button on the carry case does. But the fact that they attract dust so easily means they won’t always look the greatest without a serious amount of maintenance.

The case, conversely, is well-designed. Tribit built the case with exceptionally rounded edges, like an oversized pebble. So it sits comfortably in-hand or in a pocket and is easy to transport around. The matte materials feel as premium as they look too. But there are issues here too. Just for starters, the plug, although well-fitted and snappy, doesn’t take the entire end of the USB-C tip. So it isn’t as secure as I’d like it to be for durability purposes.

Summarily, the design decisions by Tribit on FlyBuds C1 ensured that they looked and felt great during my review. And that they’d be great for long-term use. But they also accrue an unreasonably amount of dust if they aren’t kept in the carry case or if they’re used in dirty environments. While the charging cable doesn’t feel quite as secure as it should.

Finally, the case magnets are strong enough to keep the buds in with the lid open and under severe shaking. But that doesn’t lend to one-handed operation either. Although that does mean that the buds aren’t as likely to get lost.

Battery life is well above average for Tribit FlyBuds C1

Tribit claims that FlyBuds C1 will last up to 12-hours from a single charge despite their diminutive size and my review appears to back that up. The company claims that up to 50-hours of life can be had with the charging case. A total of 4 extra charges from the case. And that earbuds take just 1.5-hours to charge while the case takes around two hours. My testing seems to effectively confirm all of that.

Now, it bears mention that I tested these earbuds at an average volume of over 85-percent for this portion of my test. And that I kept my distance at over 25-feet from the source device, with the highest quality audio I could find being used for the test. So, except for differences in battery life for phone calls and other highly subjective factors, Tribit FlyBuds C1 did extremely well under review.

Bearing all of that in mind, I actually saw just 10-hours and 40-minutes of use under those conditions. I still found myself impressed since I was essentially pushing them to the limit. And 12+ hours certainly seems in reach, given that. What’s more, the case held — after the initial charge-up — an additional 3-charges. So the company’s claimed 50-hours is entirely reasonable too. If these had lasted 12-hours per charge, that’s about how much extra time the case would have provided.

Charging up isn’t too bad either at 1-hour and 25-minutes — under the claimed charge time. Especially since the battery life is so long. And charging up the case wasn’t any worse at just under 2-hours. Although I’d love to see more companies incorporating faster charging for these devices since 2-hours is a long time to wait for such a small battery to fill up.

Perhaps as important as the quality, is volume. And my review of Tribit FlyBuds C1 showed that this is one earbud offering that hangs with the best. At least on that front.

With the volume set at around 80-percent, as part of my battery test, I left these earbuds in my basement living room and went upstairs for a few hours. And I could easily hear these earbuds still playing from the room just above. What’s more, I could still hear clearly enough to discern what song was playing.

In terms of sound, I could discuss at length how these utilize a Qualcomm-built QCC3040 chip with an aptX decoder. Or how that helps enable 16bit audio support and a 48Khz sampling frequency. Qualcomm’s newest CVC technology, conversely, helps keep calls clear, as does 4-mic Environmental Noise Cancellation. And that later tech also helps block out 90-percent of external audio.

But none of that necessarily means a great experience in terms of real-world quality. Although the mics and CVC 8.0 tech do go a long way toward making these some of the best earbuds I’ve used for keeping things isolated. The question remains, how is the audio, and how are calls?

The short answer is, “much better than expected, given the price.” But it’s more complicated than that. ENC keeps external noise tamped down, even at low volumes. However, the frequency response curve is not even across various volumes. In fact, Below 50-percent volume, these earbuds felt as though they lost around half of their power. And lower frequencies just didn’t hit at all, although they were still present.

At above 50-percent volume, these earbuds have all the power and balance you could want. With all audible frequencies hitting right where they appear intended to. And the left-right balance of that audio did a great job placing sounds in the audio space between my ears at those volumes too. That’s unfortunate since it makes listening, especially at lower volumes, somewhat of a weak experience. And, as noted above, these earbuds are loud. So listening, again at lower volumes, is going to be desirable for some users.

Offsetting that, the four-mic system for phone calls did an excellent job of isolating inbound and outbound audio. Even in windy environments and especially with consideration for the price. These felt closer to $200 buds on that front.

Connectivity & features are fairly standard but work as expected

As already indicated, Tribit designed FlyBuds C1 around Bluetooth 5.2. So, at least as far as connectivity is concerned, these earbuds offer the latest technology available. That also ensures not only that audio is transmitted to both earbuds with exact synchronization. But also that the audio is effectively lossless without using too much power.

Or at least that’s what it does on paper. How does Bluetooth 5.2 perform in real-world use under review with Tribit FlyBuds C1? In a word, brilliantly.

During my review, despite leaving my smartphone laying in a room near the middle of my home, these earbuds stayed connected. And they didn’t stutter or drop connection either, even when walking around outside of my home. At least not until I was well beyond the claimed maximum of 32-feet.

Finally, the features that Tribit packed into FlyBuds C1 shined under review. Not least of all the above-mentioned Environmental Noise Cancellation and quad-mic array. But also the button-based features — as you’ll find no tricky, finicky touch-controls here. Tribit’s push-button presents all of the usual controls, with those being split between right and left earbuds — left for skipping back and right for forward, for example.

It also allows easy access to Google Assistant — or whatever other AI you’ve got installed on your handset. And volume controls are in place there too. The latter feature isn’t as common and also isn’t too groundbreaking. But it was nice to be able to control everything completely simply by using the earbuds, without ever having to pull out my phone. Especially since that opens up avenues to control more than just skipping forward or pausing via voice controls.

Now, where Tribit FlyBuds C1 fell apart under review was primarily a matter of volume. As already indicated several times over, these are incredibly loud buds. But they lack punch at the lower volumes that some users are going to miss. And that also creates a serious discrepancy between listening on different volumes.

With that said, for anybody who happens to listen at a relatively loud volume anyway — or who really needs a lot of punch — these wearables are going to fit that bill perfectly. At the upper registers, all of the pounding, vibrating bass you could ask for is front and center. With plenty of mids and highs to back that up too. And with the balance between the ears set right where it should be.

On battery life, too, FlyBuds C1 from Tribit is phenomenal. The claimed 12-hours of listening matches well with my experience. And charging, while slow compared to what might be hoped for, is still pretty fast compared to many competitors. Tribit went out of its way here to ensure all-day listening is absolutely a thing. With comfort to match that and accessories to reinforce a comfortable fit with great audio.

All of that, of course, Tribit packed into a stylish design that’s ultraportable with a clean matter black aesthetic. At under $70, Tribit FlyBuds C1 should be on every wireless audio fan’s list of devices to watch.