A recent survey had shown that US teens prefer iPhones over Android phones and that comparison is not even close. Nearly nine out of every 10 smartphone-using teens in the US have an iPhone. Well, if you look at the chart of the top 10 best-selling phones for January 2021, you will know iPhones had no competition in the global scenario as well.

According to the latest data estimates from research firm Counterpoint Research, only four Android smartphones made it into the top 10 best-selling smartphone models’ list in January 2021. And none of them are flagship or even high-end devices.

The Apple iPhone 12 was the most popular smartphone model globally in January 2021. The device accounted for six percent of all smartphone sales during the month. Its pricier siblings iPhone 12 Pro Max and iPhone 12 Pro were the next two popular phones respectively, accounting for five percent and four percent of overall sales. Last year’s iPhone 11 came behind the three latest iPhone models.

The first Android smartphone to feature in the list is the Xiaomi Redmi 9A. The device retails for less than $100 and was the fifth most popular Android phone in January 2021. The Redmi 9A was followed by its pricier sibling Redmi 9. Samsung’s Galaxy A21s came seventh.

As said before, six of the top 10 best-selling smartphones in January 2021 were Apple iPhones. The next on the list is the affordable iPhone 12 Mini. The Samsung Galaxy A31 and the iPhone SE 2020 complete the list. 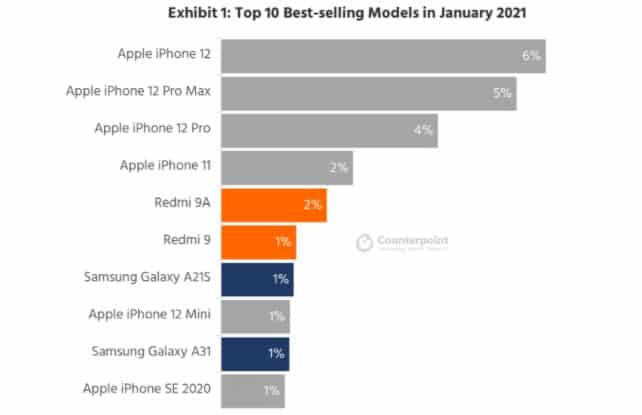 After an unprecedented slowdown last year due to the COVID-19 pandemic-induced economic uncertainty, smartphone sales have returned to normal this year. Samsung launched the Galaxy S21 series earlier than usual to take advantage of this, also taking the fight on Apple whose new iPhone 12 series arrived a bit late last year due to the COVID-19 pandemic-related market situations.

This strategy is paying off for the Korean company as its latest flagships are selling like hotcakes in major markets. However, before they arrived on store shelves, it was Apple who ran the show. According to the report, the three iPhone 12 models contributed to 71 percent of Apple’s total smartphone sales in January 2021. Nearly one-third of Apple’s sales for the iPhone 12 series came from the US. The priciest iPhone 12 Pro Max was the crowd’s favorite.

As for Android smartphones, no flagship model has made it into the top 10 best-selling list for January this year. With the arrival of Samsung’s Galaxy S21 series later in the month, and the OnePlus 9 series last month, things may look slightly different down the line. It remains to be seen how the market evolves in the coming months.