Samsung is making strides in the global smartphone camera sensors market, and is trying to close the gap with Sony.

Traditionally, there is a tight competition between Samsung and Sony for making smartphone camera sensors, and both don’t want to leave behind. But it seems that Samsung is slightly getting closer to Sony and maybe could take it over in the next few years.

According to a report by SamMobile (Via Strategy Analytics), Sony currently holds a 46% revenue share of the smartphone image sensor market. The Japanese company has established its position as the biggest sensor provider in the world. In the second position, Samsung LSI had a 29% revenue share in 2020.

Compared to previous years, Sony has lost its share and is losing it to its Korean rival. Sony used to have a 50% share of the market, but for 2020, it is slightly failing. On the other hand, Samsung is quietly taking over Sony’s share. 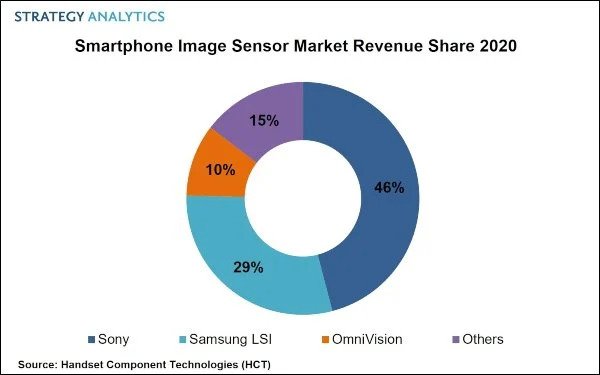 Samsung’s revenue share was below 20% years before, but now it has 29% of the global share. Thanks to the strategies and launching new sensors for mid-range to flagship smartphones, Samsung can even get more revenue shares. Samsung LSI is currently making ISOCELL camera sensors, and it’s doing a great job with them because the sensors made by them have always ranked at the top of smartphone camera rankings.

After Sony and Samsung, OmniVision Technologies holds 10% of the global revenue share. The remaining 15% is divided between other vendors.

An apparent reason for Sony’s loss is the U.S sanctions on Huawei. Sony has close ties with Huawei and is providing it with camera sensors. As one of the greatest OEMs in China, Huawei ships millions of units of smartphones each year. But U.S sanctions had a ruinous effect on Huawei’s operations and even made them enter new business segments. When Huawei sells fewer smartphones, this has a direct impact on Sony’s revenue as a partner.

Samsung also seized the opportunity and accelerated the sale of its sensors to other companies. Samsung is working on a variety of smartphone camera sensors. A few months ago, the company revealed a 108-megapixel ISOCELL HM3 camera sensor equipped with the latest technologies to capture sharper images.

The next camera sensor in Samsung’s lineup is ISOCELL GN2 that comes with interesting features, including dual-pixel autofocus and 5x optical zoom. Xiaomi is using this sensor at Mi 11 Ultra.

If you think a 108-megapixel sensor is enough for Samsung, you are entirely wrong because they’re working on a new generation of ISOCELL sensors with a 200-megapixel resolution.