Although OnePlus launched its “over-hyped” OnePlus 9 series last month, it has already bagged multiple updates. The latest OxygenOS update for the OnePlus 9 and 9 Pro brings the April security patch and camera improvements.

The OnePlus 9 and 9 Pro received their first update with some connectivity and camera improvements. Later, the second update brought in March 2021 security patches and bug fixes.

The third update for the OnePlus 9 and 9 Pro dealt with overheating issues. The fourth update that arrives with version OxygenOS 11.2.4.4 bumps the security patch level to April 2021. Moreover, it also bundles camera improvements.

OnePlus 9 series, especially the OnePlus 9 Pro, was hyped by the company to be one of the best camera phones out there. Thanks to the partnership with Hasselblad, the phone costs almost $1,000.

I have personally tested the phone, and I can say that the phone is just overpriced, and Hasselblad branding is simply a “gimmick.” The phone is okay when there is plenty of light but just cannot compare with the Ultras and Pro Max’s from Samsung and Apple.

The latest OxygenOS 11.2.4.4 update for OnePlus 9 and 9 Pro was spotted in India

Notably, as per XDA Developers, the OxygenOS 11.2.4.4 update was spotted for the Indian variants of OnePlus 9 and 9 Pro. However, we expect the update to arrive in other regions soon.

The update weighs around 349MB in size. Even though the size of the update is pretty decent, we would advise you to download the update via a stable internet connection.

Here is the complete changelog of the latest update for OnePlus 9 and 9 Pro:

System
– Improved charging stability
– Improves the sensitivity of the keyboard in the edge area
– Improved the temperature control strategy
– Fixed the issue that the battery icon in the status bar is abnormally displayed
– Fixes the small probability issue that Google Fi SIM card can not accept incoming calls
– Fixed known issues and improved system stability
– Updated Android security patch to 2021.04
– Updated GMS package to 2021.03
Camera
– Improved the image purity and the ambiance performance
– Improves the white balance consistency of the rear camera
– Improved image over-sharpening of the rear camera

As always, the update is rolling out via OTA in batches. Meaning that it won’t be live for all OnePlus 9 and 9 Pro users. Initially, it will be available for a limited number of users.

The good thing is that you can also manually check for the update. In order to that, you need to head over to System>>System updates. If a new update is available, a notification will pop up asking you to download the update. 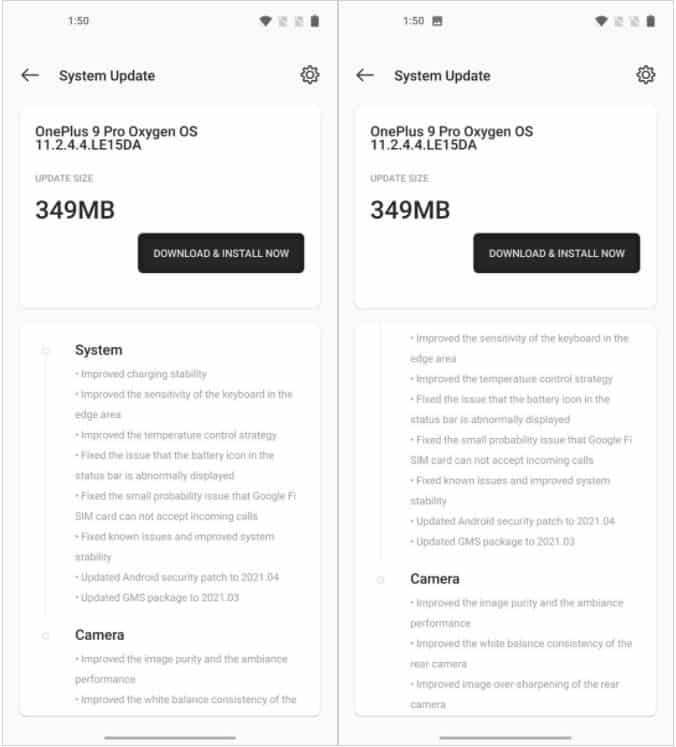