Apparently, users will now be able to record calls automatically from unknown numbers. This feature was first spotted back in January by folks at XDA.

Thanks to the screenshot shared by tipster @theyashreddi on Twitter, we now have our first look at the automatic call recording feature from unknown numbers on the Google Phone app working on Xiaomi Mi A3.

For the unaware, Xiaomi Mi A3 is an Android One phone that runs stock Android. It also comes with stock Google apps, one of which is the Google Phone app.

As written in the popup message when this feature is enabled, everyone will be notified about the recording ahead of time. Moreover, all your recordings will be saved on your phone’s storage.

Taking a look at the screenshots, it is noticeable that in the Call recording setting of the Google Phone app, there is a new “Always Record” toggle.

Once this option is enabled, you can also enable to record calls from unknown numbers by turning on the “Numbers not in your contacts” toggle ON.

Besides, there is another option that lets you record calls automatically for numbers that you select. This means that the calls will be recorded for these numbers always.

For those who are wondering to install the Google Phone app on your Android device, do note that this feature is only available in certain regions. So, it won’t be available for everyone.

Call recording is a pretty handy feature, as it allows you to save important conversations or meetings. You can make use of these recordings for reference.

But the consent of the other party is required before you record the call. If the laws aren’t strict, then you can record all the calls that you receive or make. In places where laws are pretty strict, make sure to take consent from the other person before call recording. 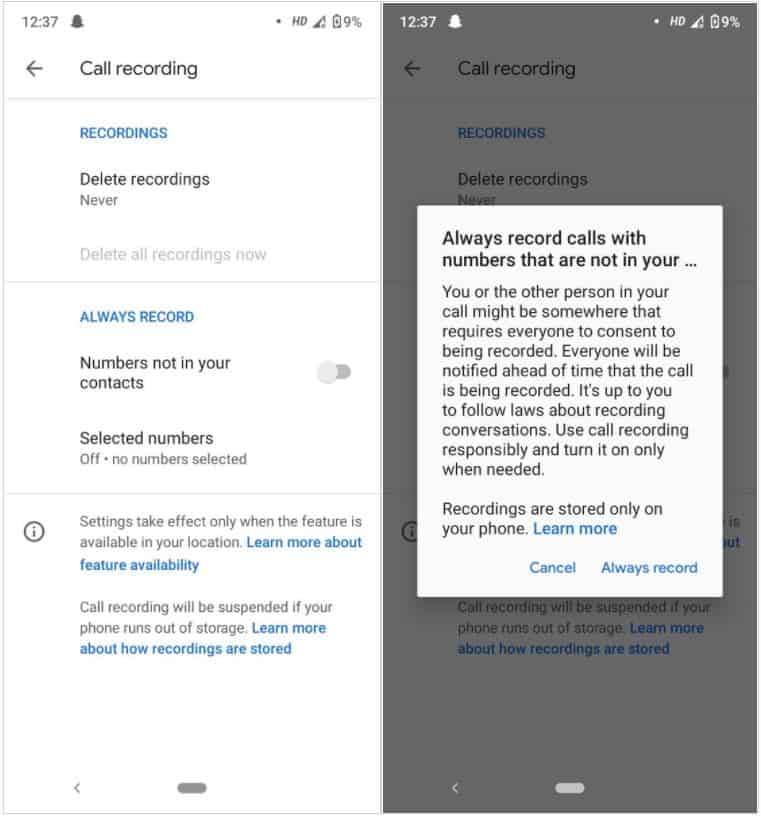