Samsung is rolling out a new update to its first-generation Galaxy Watch as well as the Galaxy Watch 3. The latest update for the two Galaxy wearables brings minor stability and performance improvements to a couple of features.

According to the official changelog, the new update improves the performance and stability of the messaging app on both the Galaxy Watch and the Galaxy Wath 3. It also improves Wi-Fi stability. This should mean more reliable connectivity. The changelog for the Galaxy Watch further includes that generic “improved system stability and reliability” pointer that we see in almost every official software update changelog from Samsung.

That’s pretty much it as far as changes brought in by the latest update are concerned. The Galaxy Watch 3 is currently picking up this update in the US, Canada, India, and South Korea, with Tizen version 5.5.0.2. It comes with the firmware version R840XXU1BUD1 and weighs 35.28MB over the air (OTA). The build number may vary slightly depending on the market and model though.

The first-gen Galaxy Watch, on the other hand, is currently receiving the latest update in Samsung’s home country South Korea only. The update is based on Tizen version 5.5.0.1 and bears the firmware version R810XXU1FUD1 for the 46mm variant of the watch. It goes without saying that the build number would vary slightly depending on the market and model.

Nonetheless, if you own either of the two Samsung smartwatches, expect to receive the new update in the coming days. You can check and download the OTA update from the Galaxy Wearable app.

Samsung is due to launch new smartwatches this year, with the Galaxy Watch 4 being one of them. The company is said to ditch Tizen in favor of Wear OS for its next-gen smartwatch. It will be Samsung’s first Android-powered smartwatch since the Galaxy Gear Live back in 2014. All of the Korean firm’s smartwatches have since come with the Tizen OS.

Anyways, while the wait for the Galaxy Watch 4 continues, its predecessors are picking up new updates. Both the Galaxy Watch as well as the Watch 3 received major updates earlier in February, introducing several new features. Samsung is now following that release with another update that’s starting to roll out this week.

Although it’s a minor update, we expect Samsung to bring these changes to the Galaxy Watch Active as well as the Active 2 soon. So if you own any of these Samsung wearables, be on the lookout for a new OTA update in the coming days. 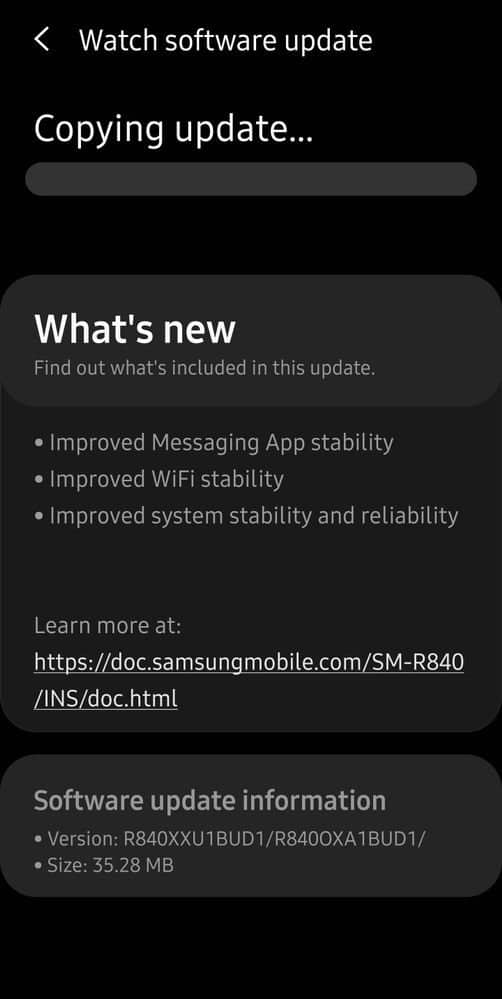