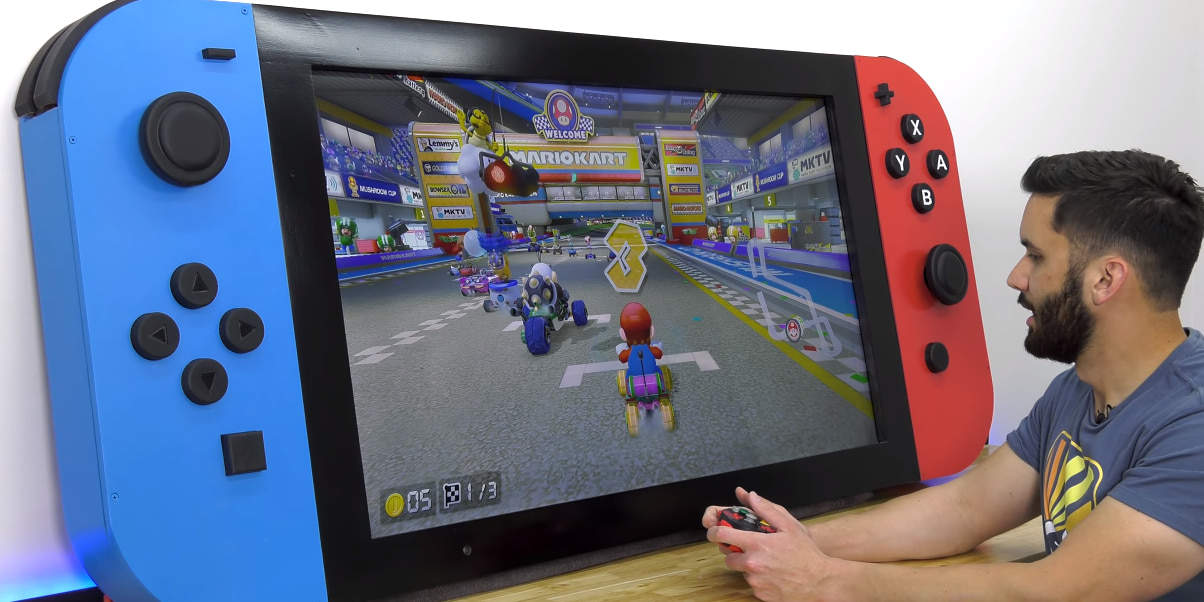 This huge Nintendo Switch is the stuff dreams are made of. That is if you’re someone who’s ever dreamed of playing games on a Switch that’s probably as big as your TV.

YouTube content creator Michael Pick took that dream and made it into a reality. Building a larger than life Nintendo Switch consoles that you can actually play. All the buttons work properly, too. So it really is playable just like the original model that can actually fit in your bag.

According to pick, the idea for a life-sized Switch came to him because the Switch is a small console. Making it somewhat easy to misplace. So he built a version that wasn’t so easy lose. Granted, this reason is more for the fun of the video and not the actual reason for the build. See, Pick gave the mega Switch to St. Jude’s Children’s hospital. So it’s pretty likely that the whole thing was put together make something fun for the kids.

This huge Nintendo Switch is actually a big TV

It may look like a giant Switch and play like a giant Switch, but in reality it’s a 65-inch 4K LED TV inside of a wooden shell. The entire build can be seen in the video above. The Joy-Con controllers and the majority of the console’s shell is all made out of wood.

While the buttons and joysticks are 3D printed. On the inside of the giant Joy-Cons, there’s actually a small Joy-Con controller that helps make everything work. It sits inside of a 3D printed mount that allows for servos to hit all the buttons.

There’s one of these setups on each side, with the actual Switch mounted in with the left Joy-Con. Now when you get right down to it, this is basically just a giant Nintendo Switch-shaped TV. But because the buttons all work, it’s definitely more interactive.

You can play with a Switch Pro controller too

The buttons may work, but you can’t exactly hit all the buttons on both sides in the same way you would with a regular Switch. The whole thing is just too big. Having said that, since this was given to St. Jude’s, it could be a fun way for kids to play games together.

You can also play with a Switch Pro controller, which makes things more of a kick back experience like you would probably expect. If you’re a Nintendo fan, this is probably your ultimate setup. We get it.