Music streaming giant Spotify has launched its own hands-free wake word: “Hey Spotify”. The company is sending notifications to its users detailing how to enable and use the new feature for voice commands.

As reported by GSMArena, tapping on the notification prompts you to turn on the “Hey Spotify” wake word. Of course, those who missed the notification can still manually turn on the feature by navigating to the app’s Voice settings. Once turned on, you can say the command to wake up Spotify’s voice search functionality. The feature only works when the app is open and the screen is on.

This essentially means Spotify is always listening for the wake word as soon as you open the app. The company says, by agreeing to use the feature, you’re allowing it to keep recordings and transcriptions of the searches. The app only starts recording after it hears the wake word, or when you press the microphone icon.

Spotify, of course, already offers a voice search functionality to its premium users. However, you currently need to long-press the microphone icon on the search bar for the app to listen to your voice commands. The “Hey Spotify” wake work makes voice-based searches on the app hands-free.

However, the fact that you need to keep the app open in the foreground and the screen must also be turned on means it is barely useful. It might be a better option to use your phone’s built-in voice assistant (“Hey Google” on Android and “Hey Siri” on iOS) to play a specific song, album, or artist on Spotify over voice commands. They are always listening to you regardless of what app you are using and whether the phone’s screen is on.

Perhaps Spotify has some bigger ambitions with its “Hey Spotify” wake word. Of course, making the app’s voice search functionality hands-free could result in more people using it when in the app. This will, in turn, provide the company with more user data to work with for its future products or services.

The music streaming giant is working on a so-called “Car Thing” which could be some sort of car experience with Spotify. Since hands-free control is critical while driving, this new feature could eventually be targeted for this upcoming car-focused product or service, whatever it is. Otherwise, “Hey Spotify” on a phone doesn’t serve much purpose when “Hey Google” or “Hey Siri” is already available. 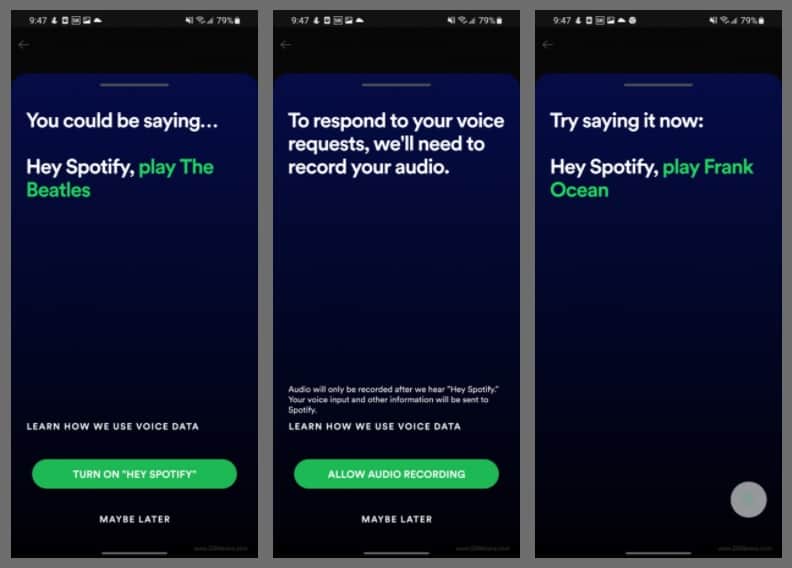