The firm notes that the COVID-19 pandemic-induced financial uncertainties had affected the Galaxy S20 sales last year. This has helped magnify the Galaxy S21 series’ comparative performance. However, the new Galaxy flagships are still seeing strong demand from consumers in the US.

The Galaxy S21 series accounted for almost half of overall US sales for Samsung in February. The key to this overwhelming success has been the lower starting price of the new phones, the firm says. Samsung reduced the starting price by $200 across the lineup this year.

Strong support from US wireless carriers has also helped boost the sales of Samsung’s latest flagship offerings. Both T-Mobile and AT&T offer up to $800 in credit with a new plan and an eligible trade-in. Verizon is also offering up to $750 in trade-in credit with an unlimited plan.

These trade-in offers essentially make the vanilla Galaxy S21 free. And you can already see the results of this when you look at the model-wise breakdown of the sales figures. The base model S21 accounted for more than one-third (35 percent) of the overall sales. On the other hand, the vanilla Galaxy S20 was the lowest-selling model of the three phones last year. The Galaxy S21+ sold the least in the US this year.

“Samsung also got the camera configuration on the base model (S21) right, giving it three on the rear to match up with the deluxe S21+,” said Counterpoint’s US Research Analyst Maurice Klaehne. 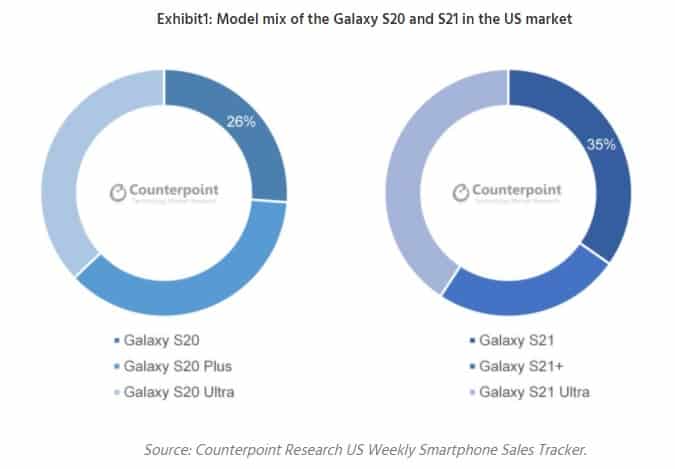 Galaxy S21 sales have doubled in the US

Samsung launched the Galaxy S21 series on January 14, with pre-orders beginning immediately. General sales of the phones began on January 29. A report from research firm Strategy Analytics last month suggested that the first-month sales of the Galaxy S21 trio in the US have tripled compared to the Galaxy S20 series last year. Now, another research report suggests a sustained though slightly declining demand into the second month as well.

Galaxy S21 sales peaked in the first week since the launch. This is when everyone waiting for the new Galaxy flagships placed their orders (Samsung was offering a free SmartTag to pre-order customers, so why wait). As expected, sales in the sixth week saw the sharpest decline overall.

Of course, the phones won’t keep selling like hotcakes forever. However, for the time being, Samsung has been able to stamp its authority in one of the most mature smartphone markets in the world. The company is now betting on its affordable 5G offerings like the Galaxy A52 5G to carry the momentum forward until it comes up with new foldables in the second half of the year. 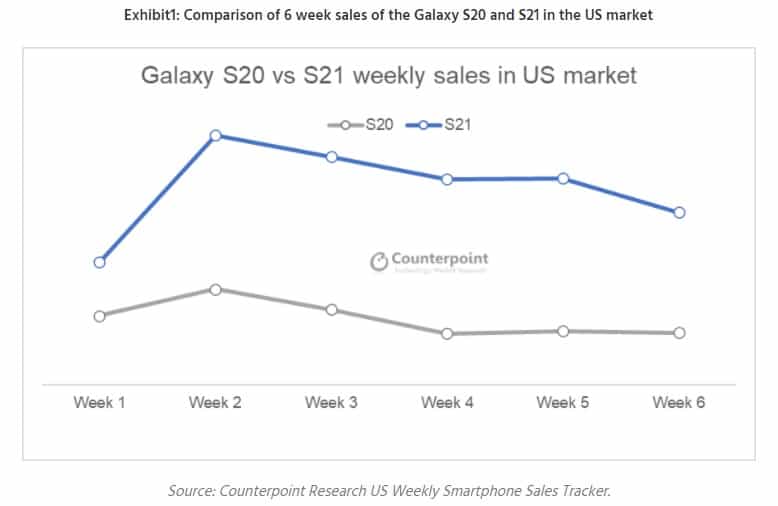