Samsung may have more affordable 5G phones coming out of its doors in the coming months. The Wi-Fi Alliance has just certified a new Samsung smartphone with model number SM-M426B. This device should launch as the Galaxy M42 5G. It would be the first phone in Samsung’s Galaxy M series to support the next-gen cellular connectivity.

The entry on the Wi-Fi Alliance database reveals that the new phone supports dual-band 2.4GHz and 5Ghz Wi-Fi, runs Android 11 out of the box, and will be available in a dual-SIM variant, though none of this is really a surprise.

However, the Bluetooth SIG certification for the same device (SM-M426B) has something interesting in store. It appears the supposed Galaxy M42 5G is nothing but a rebranded Galaxy A42 5G. And if you’ve been following Samsung’s strategy with its affordable 5G phones closely, you know it’s not a very exciting piece of news here.

Samsung has been apparently sacrificing some important specs to enable 5G in its mid-range phones. According to a SamMobile report, the Galaxy A32 5G has poorer specs than its 4G-only counterpart. And that’s likely not a one-off case.

Samsung usually offers an excellent mix of specs at relatively low prices with its Galaxy M series. This has made the series a huge hit in markets like India. Samsung is now even starting to expand the availability of the Galaxy M series phones to other regions.

However, the Galaxy M42 5G arriving as a rebranded Galaxy A42 5G means its spec sheet wouldn’t be as exciting as we’ve come to see on previous Galaxy M smartphones. The Galaxy A42 5G features a 6.6-inch Super AMOLED display with a 720×1600-pixel resolution. It packs a 5,000mAh battery and supports 15W fast wired charging.

Meanwhile, Galaxy M series phones in the same price segment come with Full HD+ screens, pack bigger batteries (6000mAh or 7000mAh), and even offer faster wired charging speeds of up to 25W. So the Galaxy M42 5G would be sacrificing a lot in the name of 5G.

This isn’t the first time the Galaxy M42 5G has popped up on the internet. Back in November 2020, India’s BIS (Bureau of Indian Standards) and China’s 3C certified the battery pack for what is seemingly the 4G variant of the Galaxy M42. It was a 6000mAh battery (5000mAh on Galaxy M42 5G/A42 5G), so there’s another evidence that buyers of Samsung’s affordable 5G phones aren’t getting the best value unless they are buying the phones solely for 5G connectivity.

Anyways, with the Galaxy M42 5G picking up necessary certifications thick and fast, it shouldn’t be too long before Samsung makes an official announcement. We will keep you updated as and when it happens. 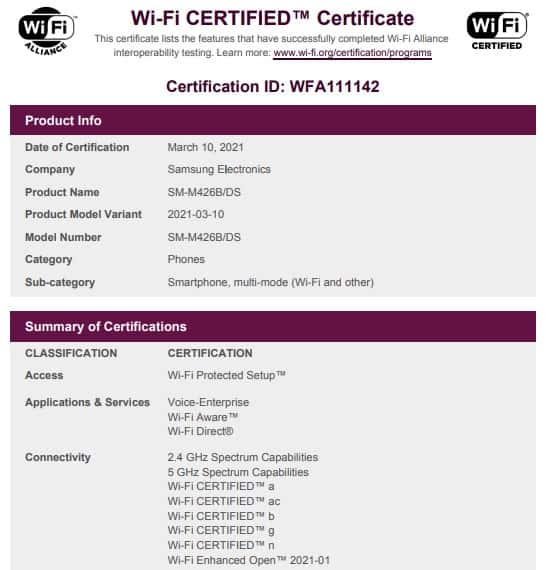