Skip to content
Advertisement
Trusted By Millions
Independent, Expert Android News You Can Trust, Since 2010
Publishing More Android Than Anyone Else
35
Today
112
This Week
35
This Month
5293
This Year
115300
All Time
Advertisement Panasonic has created something truly magical for your ears with this sound bar.

I’ve always been a firm believer that a really nice set of gaming headphones were the perfect companion for playing games, but the Panasonic SoundSlayer might just change my mind.

The Panasonic SoundSlayer is a powerful, compact sound bar that is designed mainly for gaming. Though it does provide ample experiences for music and film too. But gaming is where this thing really shines. And it should, as it was designed in partnership with sound engineers from Square Enix who worked on Final Fantasy XIV.

The result is a sleek-looking sound bar that doesn’t take up too much space, that’s also purpose built to deliver loud, clear audio for various types of games. There are three different game modes that are meant to deliver the best possible audio experience for those game types. This includes FPS mode, RPG mode, and Voice mode.

Panasonic also designed the SoundSlayer with Dolby Atmos, dts:X, and dts:X Virtual for an audio experience that surrounds you in the audio of whatever you’re playing, watching, or listening to. But what about the overall quality? Or the ease of use? And is it worth it for the price? In this review we break that down.

A simple yet excellent design that’s impossible not to love I’ll be honest, there’s nothing visually stunning about the Panasonic SoundSlayer that makes you say, “wow.” It’s just not that kind of a product in terms of the aesthetics.

However that shouldn’t mistaken for “this looks bad.” The design isn’t stunning because Panasonic has gone for a more simplistic look here. It’s more minimalist. Which in its own right can be a very beautiful thing. The reason why I say this design is excellent is in fact because of how simple it is. The minimalist approach to it makes it very easy for it to blend into any setup.

Being that this is a gaming sound bar, you’d expect it to have a bunch of RGB lighting. Or at least some. Yet it has none at all. Which is part of the appeal and helps it blend in. There’s nothing wrong with a little RGB lighting. But It doesn’t need to be on absolutely every piece of hardware in your setup.

Panasonic also designed this sound bar to be extremely compact. So it fits just about anywhere. And more than anything else that’s probably the biggest benefit here. Is that it’s small enough to fit on just about any desk and not take up too much space.

This makes it a very viable option for gaming audio and allows it to rival options like Razer’s Leviathan. It has easily accessible buttons too. All three of which sit on the right side of the sound bar so they’re not in view. Though, most of your control will be done from the included remote. 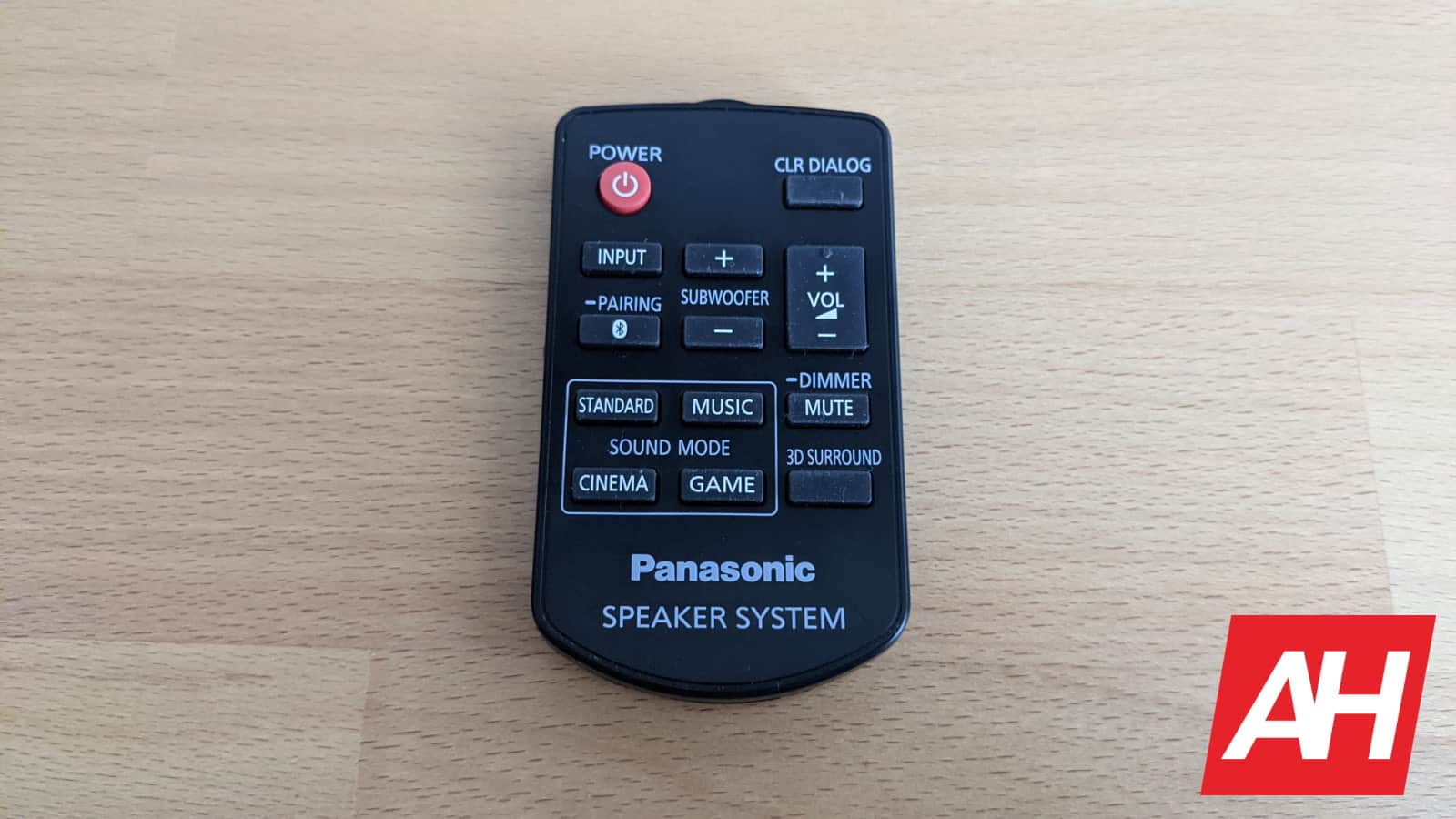 Not all games are the same, so why should your sound be the same for every game you play? It shouldn’t. Just like you might want a specific keyboard or mouse for the control and movement of your abilities in certain types of games, having audio that fits with that type of game is also important.

And that’s really what the Panasonic SoundSlayer is providing here. You have the RPG mode for RPG titles, which is supposed to enhance the intensity of the game audio to help immerse you in the world of that game. Like you’re living it.

Final Fantasy XIV is a good example here. Because it’s an MMORPG, it literally is a living world that is always going through constant changes. And the RPG mode of this sound bar helps amplify that game experience to put you into that world.

With the FPS mode, audio becomes more directional and was designed to help location-based sounds be more apparent to the player. I’ll typically use this when playing games like Call Of Duty or Destiny 2. Which makes it easier to hear which direction certain types of sounds (such as footsteps or bullet fire) are coming from.

Then there’s the Voice mode which is more or less meant to be for most other games. It shines with adventure games or any games which are very heavy on vocal dialogue. Beyond the gaming modes, there are also two other modes – one for cinema and one for music.

Switching between the game modes is a minor drawback

The only issue with the different game modes is not the quality of the audio for each mode. It’s the act of switching between them that can be a bit of an annoyance at first. The problem is that the remote you use to control the features of the sound bar only has one button for the game modes.

You have to use it to cycle through the three different options. Yet, none of the modes are listed on the remote. You simply have to press the button that says game and then pay attention to the LED lights on the front of the sound bar. Which LEDs are lit up and what color they are indicate which mode you’re in. But you wouldn’t really know that by looking at the remote or the sound bar itself since RPG, FPS, and Voice aren’t listed anywhere on either one.

Instead, the only place these are labeled is in the quick start guide that comes in the box. Meaning you just have to familiarize yourself with each mode and remember which LEDs indicate which one. It’s a bit cumbersome, but totally doable. Having things labeled would just make things more user-friendly. 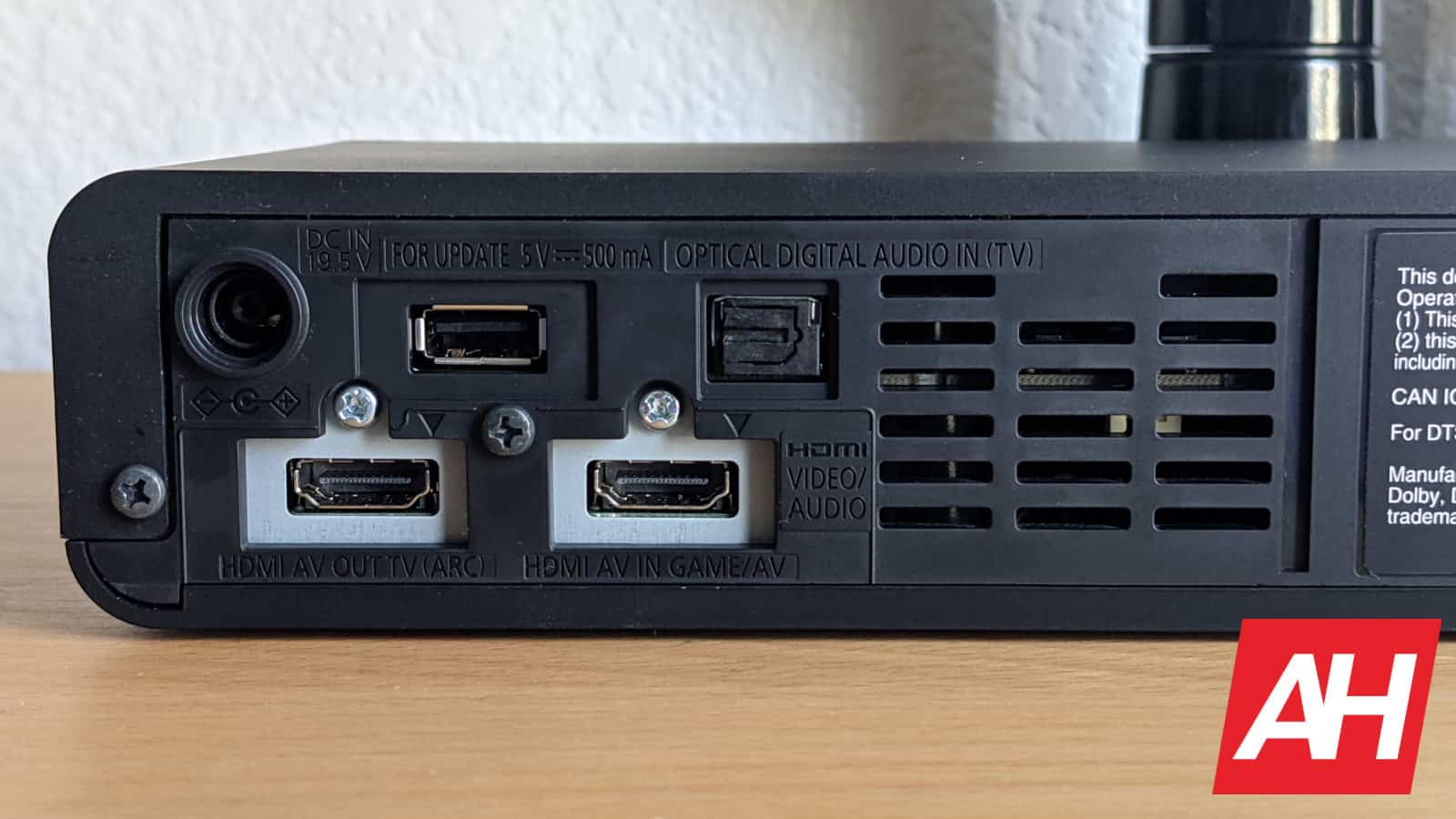 One of the reasons why the Panasonic SoundSlayer is a great sound bar option is the 4K HDR pass through. Since I have both the PS5 and my gaming PC hooked up on my desk, I needed the sound bar to be the audio source for both.

Fortunately the 4K HDR pass through allows me to connect the PS5 up to the sound bar for audio and video. Then I use the Bluetooth to connect it to my PC. I also have dual monitors and use a DisplayPort for the PC. Which the sound bar doesn’t support. So I needed it to connect to the PS5 and its monitor in addition to the PC which uses a different monitor and a different cable for the video.

Thanks to the pass through and the Bluetooth connection I can have it setup for both and switch between systems rather easily. Allowing a single piece of equipment for both systems and ultimately saving me even more space on my desk.

While not everyone is going to benefit as much as I did with this particular feature, it’s still useful for everyone and is one of the best things about the sound bar.

Make sure to turn off the auto-shut off feature 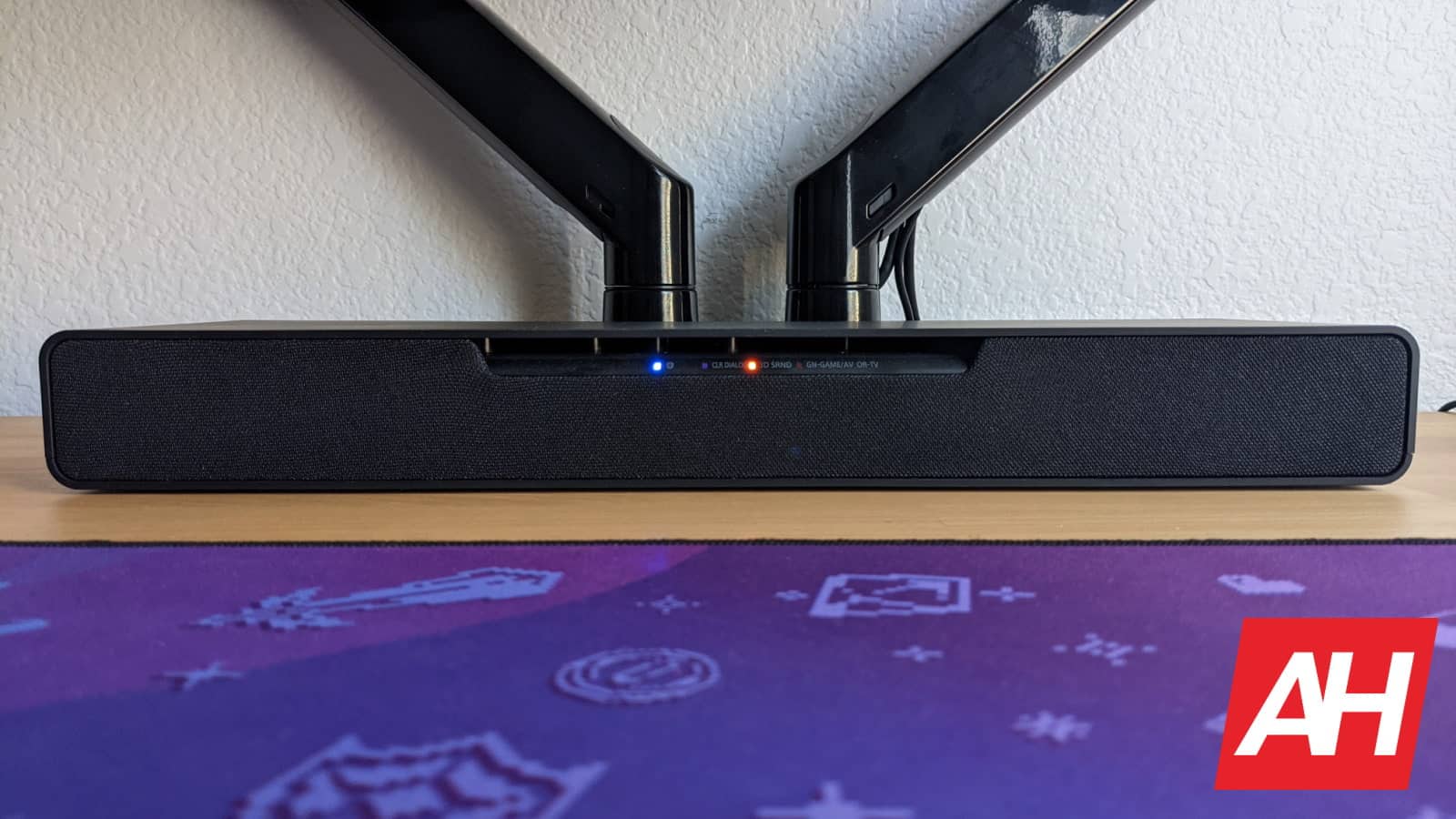 By default, the SoundSlayer has a feature that automatically shuts it off if no sound is being pushed through it. This takes about 20 minutes or so before the auto-shut off goes into effect.

What should be an easy way around this is to disable the auto-shut off. Having said that, this is another one of those things that’s not blatantly obvious how to access it as you’ll have to dig through the manual for the process. To disable the auto-shut off there are a few different buttons on the remote you need to press in the correct sequence and for the correct length of time. While the SoundSlayer is powered by Dolby Atmos, unlocking the full potential of Dolby Atmos for this sound bar isn’t free. It’s not included with the purchase of the SoundSlayer, and instead costs an additional $14.99 to buy the license.

You can grab it from the Microsoft Web Store, and you absolutely should buy it. While the SoundSlayer really does sound great without this, the sound profile that you can download and activate after purchasing the license turns thing up by like five notches.

The increase in surround sound quality is very noticeable, and makes all the difference when you use this as your audio source for movies and games where spatial sound is important.

Having said that, the SoundSlayer is already a slightly expensive option for a sound bar. At a retail price of $299 ($349.99 for the limited edition model that has a Final Fantasy XIV design theme) it is pricey. So forking over another $15 just for the Dolby Atmos license may not exactly sit right with some consumers. And that’s understandable.

If you’re not 100% opposed to it though, definitely pick it up. You won’t regret it. Your ears will thank you, and you’ll be able to immerse yourself a little further into your games.

Should I buy the Panasonic SoundSlayer?

There are a lot of good audio options out there for gamers these days. From sound bars like the Sonos Beam to the Razer Leviathan. You could also for really any sound bar or speakers that are simply designed for great audio quality. And not necessarily just for gamers.

If you want something that is designed for gamers though, your options begin to thin out just a little bit. The nice thing about the Panasonic SoundSlayer is its three gaming specific modes. It also goes beyond that with the really compact size.

Plus the HDMI pass through and the Dolby Atmos are nice perks to have. In short if you want a great quality sound bar with excellent sound, you should buy the SoundSlayer. But as noted above, do yourself a favor and spend the extra $15 on the Dolby Atmos license from Windows. As this will enhance the sound even further. You can buy the license through the Dolby Access app, which itself is free.