Oukitel provided a review unit of the WP10 5G smartphone for review purposes. This review was written after using the device for more than 7 days. The phone is running Android 10 with the December 2020 security patch.

The launch price of $389.99 puts it firmly in the mid-range category. So let’s dive into the review to see how this rugged smartphone stacks up. I like the retail square pizza box of the Oukitel WP10 5G. Inside is the phone, 18W power brick, USB-C cable, and a headphone jack dongle along with some paperwork. I guess that is pretty much everything you need to get started. 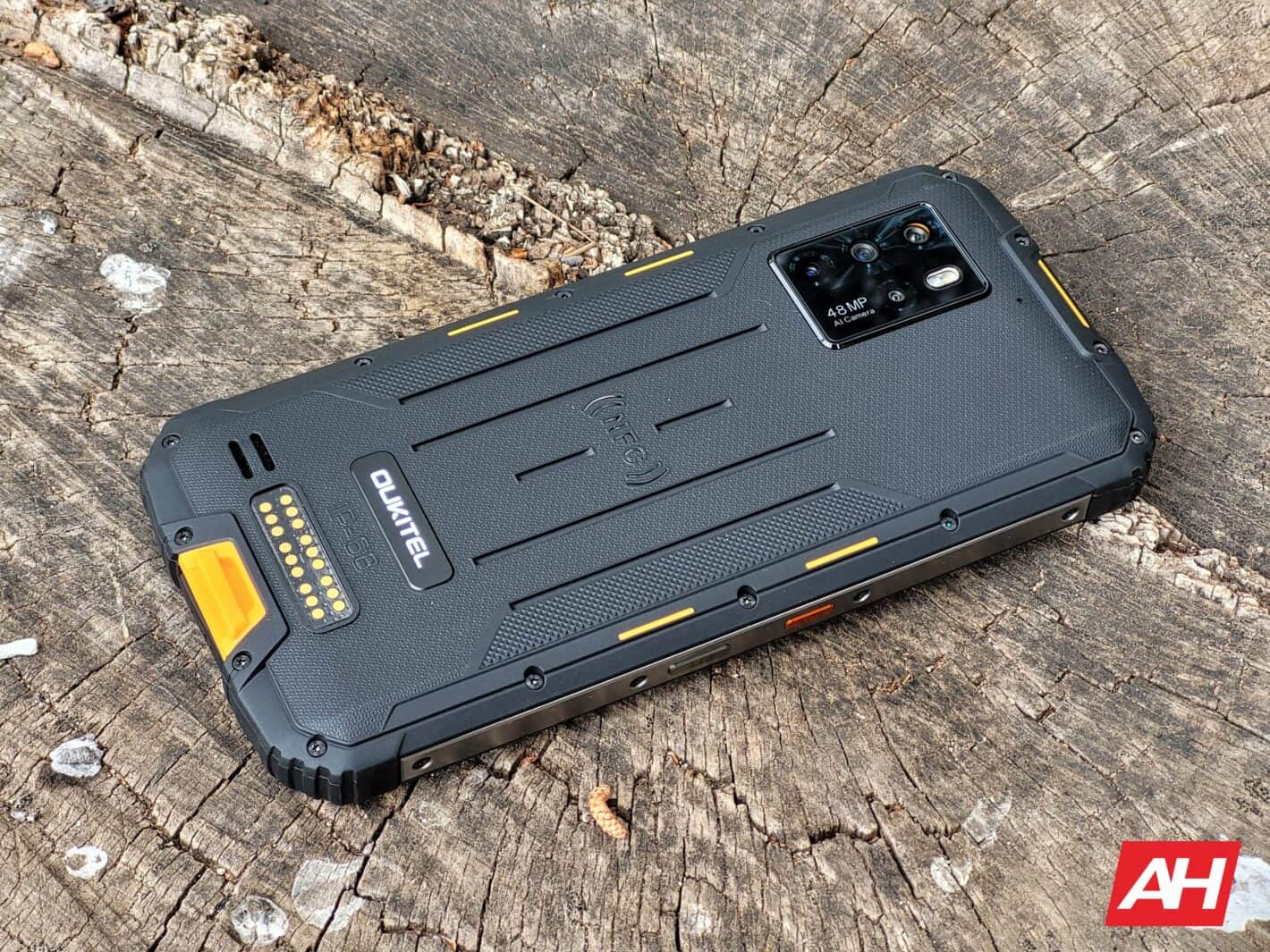 Like pretty much every other rugged smartphone, the Oukitel WP10 5G also comes in Henry Ford Black. However, this time around Oukitel has added a few orange accents to spice things up a bit.  But like most other rugged smartphones there’s only so much leeway available for creativity in terms of hardware design. This is because function triumphs over aesthetics when it comes to these devices.

The backplate has a few different texture elements which provide a good grip. This backplate is secured to the frame via 14-star screws. We also get an NFC logo along with the Oukitel branding on the back. The speaker grille is also on the back since the top and bottom rails are sealed to meet the IP68 rating. You also get to see the quad-camera module. For a large device, there is minimal wobble which is nice. On the sides, we have two metal rails and these are secured via 4-star screws each. Moving to the bottom you see a USB-C port which is covered with a flap to keep water and dust out. There is a cutout on the top and bottom rails for the microphones. The volume rocker, power button, and fingerprint sensor are all on the right-hand side. And on the left-hand side, we get the SOS and PTT buttons. More on the functionality of these buttons a bit later.

The dual-SIM tray slot is on the right-hand side. And sadly there is no expansion slot for a micro SD card with this phone. All the buttons are metallic with an excellent tactile feel. The power button has a textured surface with an orange accent while the SOS button is Orange in color to distinguish itself easily.

But the legitimate thing that is unique about this device is the massive 6.67″ screen on the front. And Ouiktel opted for a hole punch which results in a high screen-to-body ratio. The bezels however are a bit chunky compared with other regular smartphones and I wish Oukitel did a bit more to reduce them or at least make them even all around.

Two things to note here, the phone is big and heavy. The 8000 mAh battery is to blame along with the overall construction material weight to achieve water/dust ingress and drop test requirements. But those wanting a large-screen rugged smartphone will be quite happy with the WP10 5G. 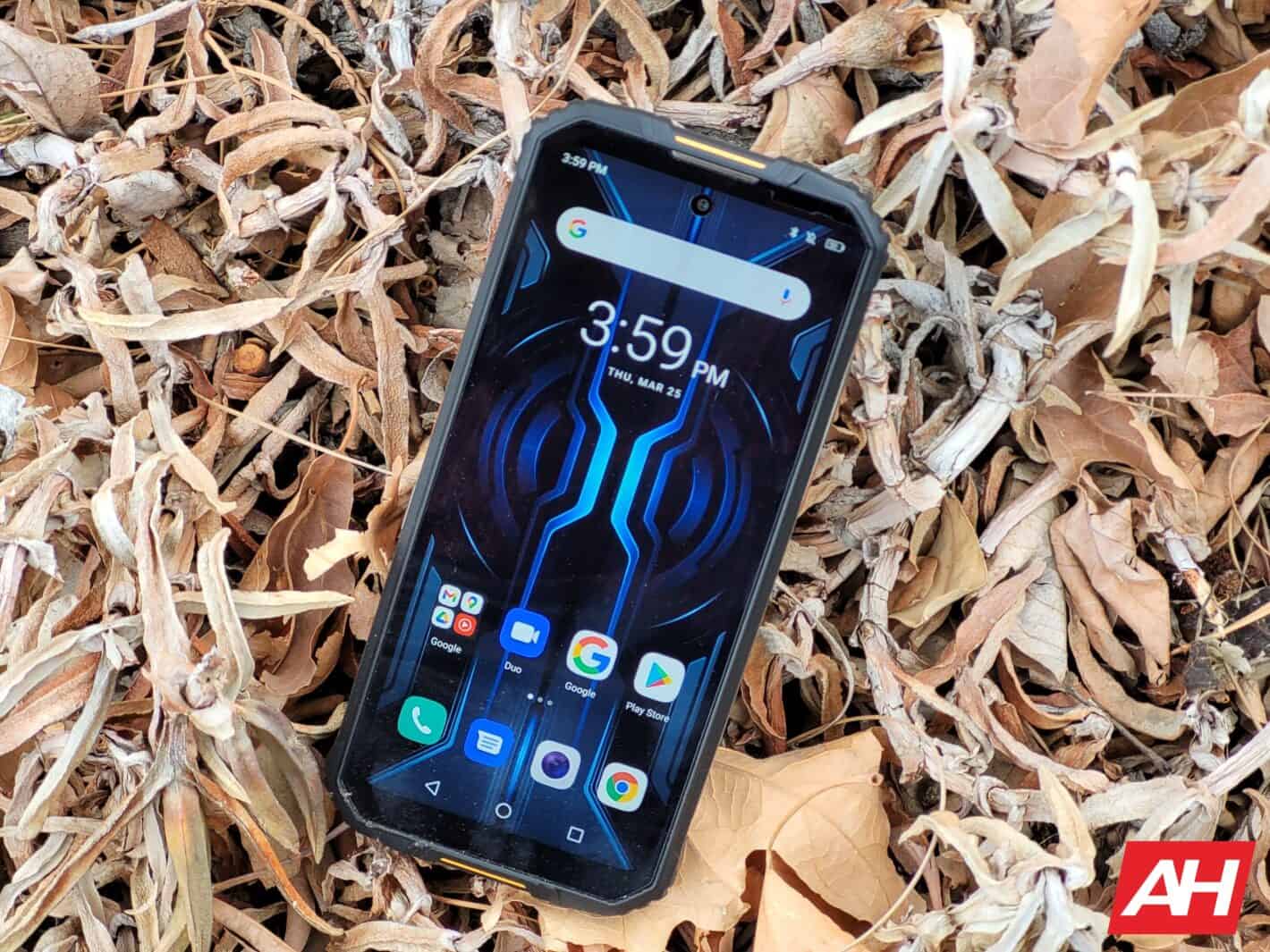 The WP10 5G has a 6.67″ FHD+ display with 2400 x 1080 pixels. Overall the pixel density is good enough that no pixelation is visible during daily use. There is Corning Gorilla Glass protecting this display panel so expect some scratch resistance during everyday use. And Oukitel includes a factory-installed film screen protector for good measure.

While you get a large screen with good pixel density and color profile, the outdoor visibility in daylight is quite poor. This is despite turning off the auto-brightness setting and manually changing the brightness to maximum. This is probably one of the least bright devices I have ever reviewed in terms of daylight visibility.

So you have plenty of real estate of videos, word documents, web browsing but just don’t try to do all of that in broad daylight. 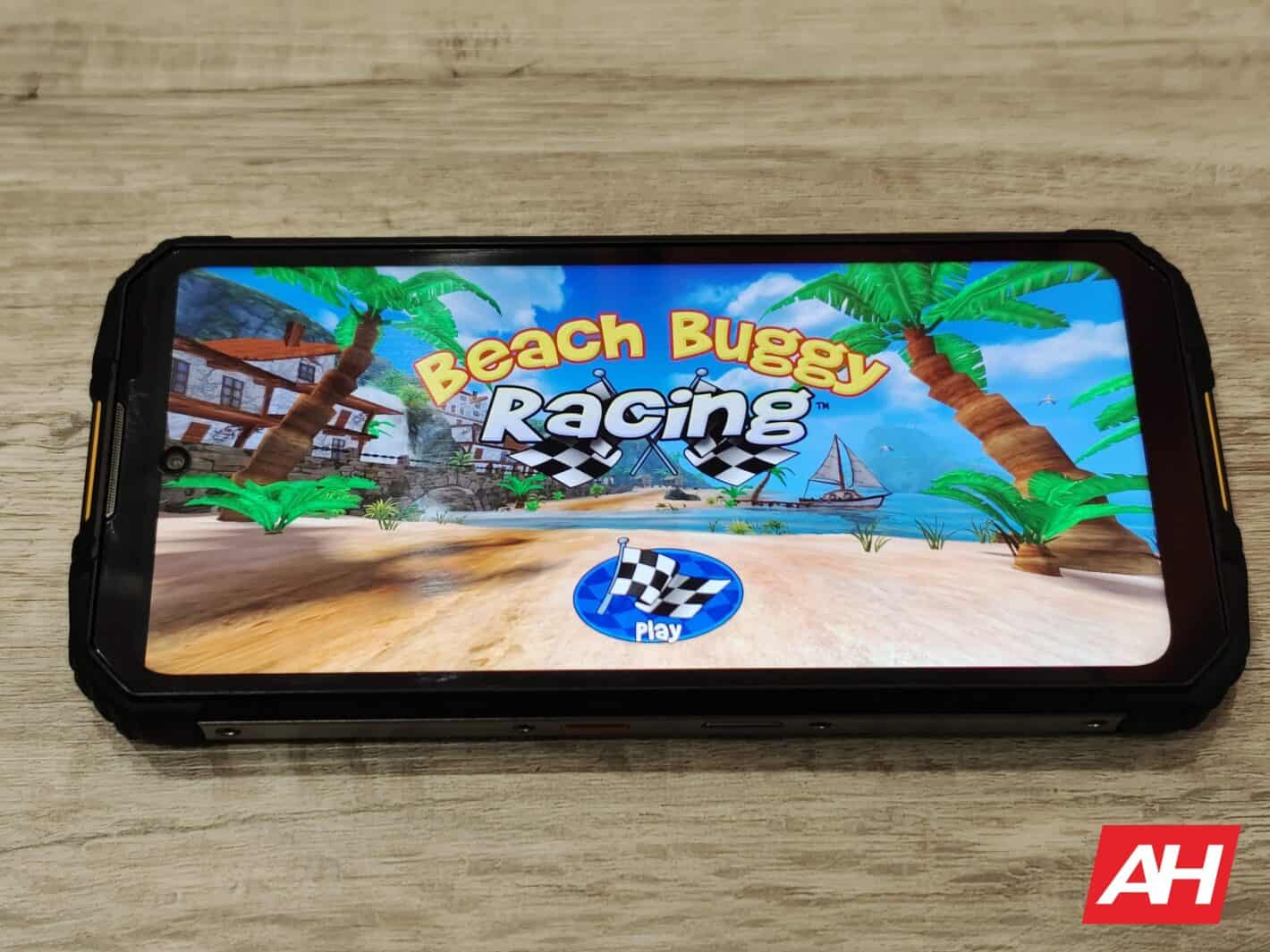 The Oukitel WP10 5G is powered by the MediaTek Dimensity 800 series processor. The 7nm process Octa-Core processor packs decent enough power to run most tasks without any hiccups.

Benchmark scores are likely to be comparable to other devices running the same processor. The reason I say likely is because Geekbench is not able to complete the CPU Benchmark test on this device for some reason.  My guess is that based on the hardware specs, the performance of this smartphone is likely to be at parity with devices running the Snapdragon 765 chipset.

In terms of memory and storage, the review unit has 8GB RAM and 128GB UFS 2.1 storage which is quite reasonable. The only weakness is that there is no micro SD card slot for expandable storage.

Overall with the 8GB RAM and the Dimensity 800 processor, expect no issues with everyday web browsing, emails, video, and most games.

Software on the Oukitel WP10 5G is basic without any bloatware

On a positive note, there is pretty tight Google integration in terms of Discover Feed, Phone, Messages, and other Google apps. In addition to this, Oukitel doesn’t include duplicate apps for Clock, Calculator, and Notes which is praiseworthy. And thankfully there is basically no bloatware on this phone.

The Settings menu however looks a bit different and the number of options available for tweaking is pretty minimal. Another item to keep in mind is that Gaming Mode is very basic – stops notifications and calls and that’s it. Finally, the software is still Android 10 and the security patch is already 3 months old. So I am a bit leery of long-term software support for this device.

The worst part about this device is taking a screenshot. There is no shortcut in the quick settings menu and the power and volume down button did not work despite multiple tries. This is the reason I have no software screenshot gallery to share with you as part of this review.

Battery Life is excellent thanks to the 8000 mAh battery 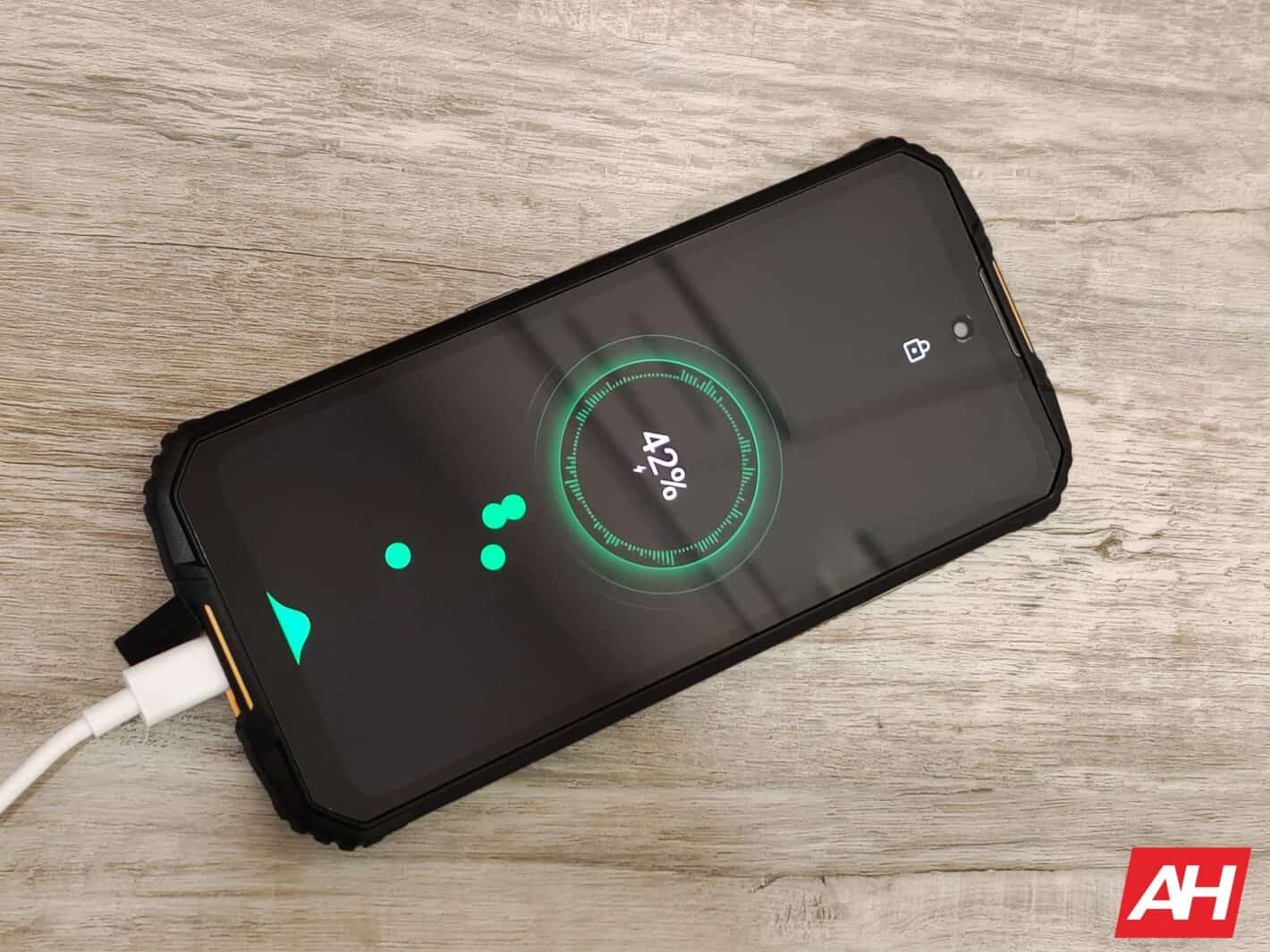 With an 8000 mAh battery onboard this device is essentially a smartphone attached to a power bank! With an efficient new processor and a 1080p screen, the SOT is easily close to 8 hours. So two-day charging is definitely possible for most moderate users. The factory charging brick is 18W and it does take closer to 3 hours to fully charge this device.

What good is a power bank if you cannot charge other devices? Well for starters, you need to search USB preferences to then toggle on ‘Charge connected device’ in order to use reverse charging.

Audio quality is basic but serviceable 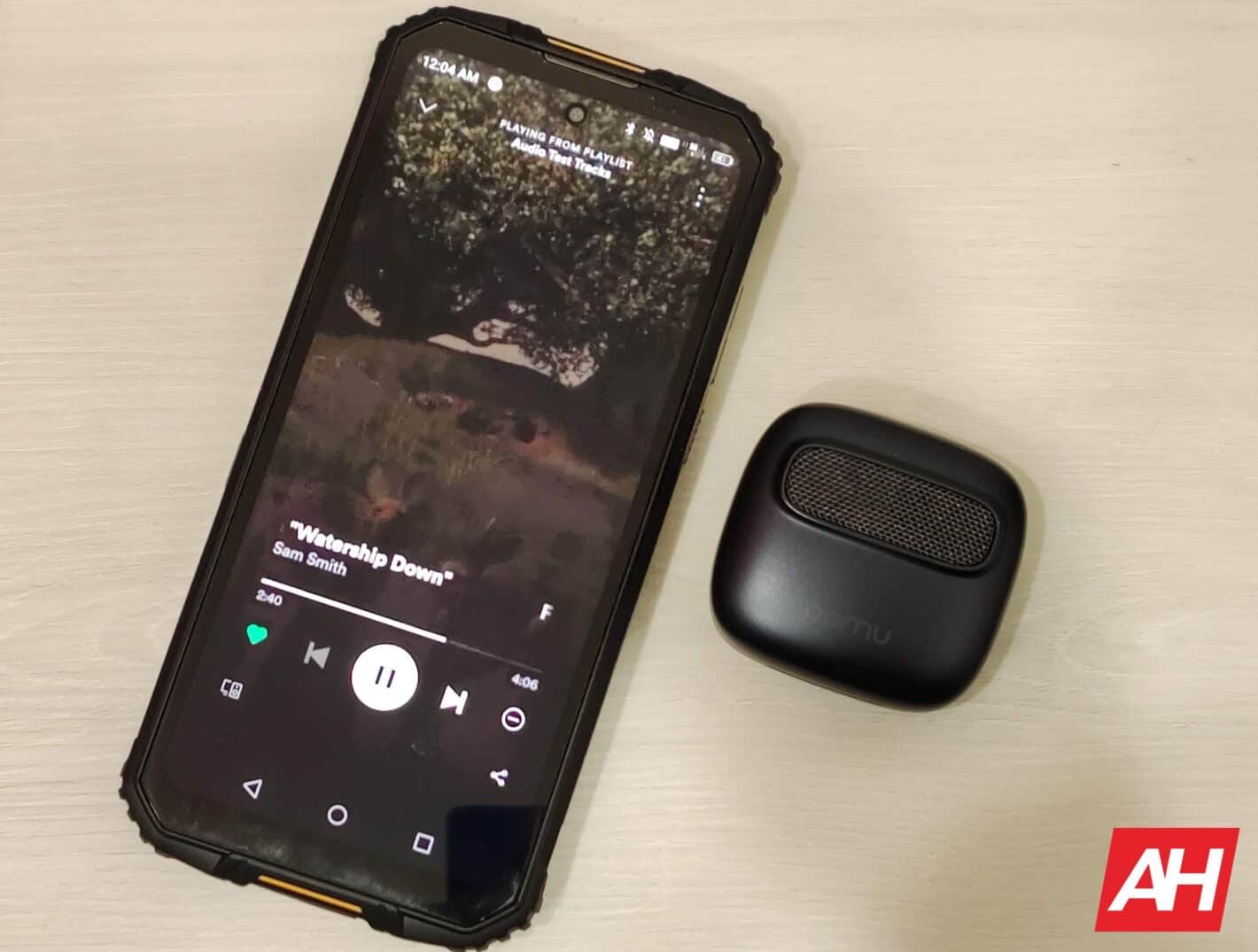 As far as speakers go, there is one bottom-firing speaker on the rear panel. The audio output is okay at regular volume for speakerphone or for watching videos. But because of the large size of the device, the audio sounds like it is coming out of an echo chamber at higher volumes.  The top earpiece for phone calls is good for voice calls.

Audio output from the headphone jack dongle via USB-C port is definitely good. And wireless Bluetooth audio quality using various earbuds is slightly better than the wired headphones via the dongle. If you use the dongle then be careful as the cover flap for the USB-C port will dangle around during use. I suspect that this cover flap if left to dangle long term might break so I suggest it is best to use wireless headphones from a convenience and device integrity viewpoint.

Cameras on the Oukitel WP10 5G are not that good 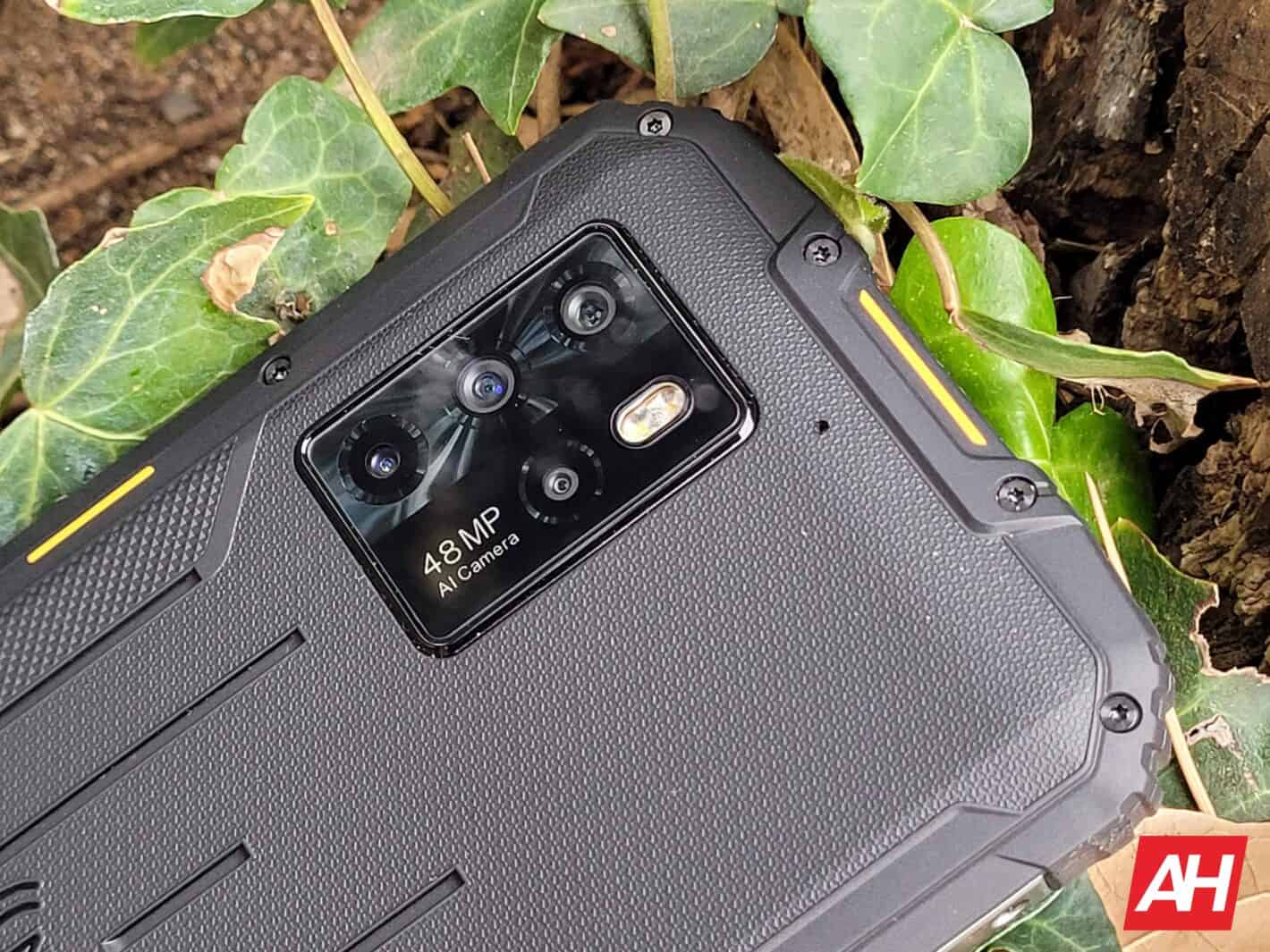 On paper there is a quad-camera module on the Oukitel WP10 5G. The main camera is a Sony 48MP sensor with f/1.79. There is also a 13MP Ultra-Wide camera with 124° FOV. Then there are two 2MP cameras – one for depth sensing and the other is a macro camera. My personal thoughts are that you should treat this device as having a dual-camera system on the rear.

The main camera takes good pictures in daylight or on a cloudy day. The photos are exposed correctly, the color science is quite good and there is no extra saturation. The wide-angle camera is a definite miss in terms of accurate color reproduction.

As far as the selfie camera goes, while I couldn’t locate the specs easily I like the results. You get decent pictures with good edge detection in portrait mode as long as there is good light indoors or outdoors. You might need to adjust the exposure a bit to get good colors though.

Indoor shots in medium light are okay via Night Mode. For any other low-light situation, my suggestion is to look elsewhere. Take a look at some sample pictures via our Flickr gallery below.

The camera app is also not the greatest. HDR needs to be toggled on manually in settings and each time you exit the Photo settings you need to toggle it back on. 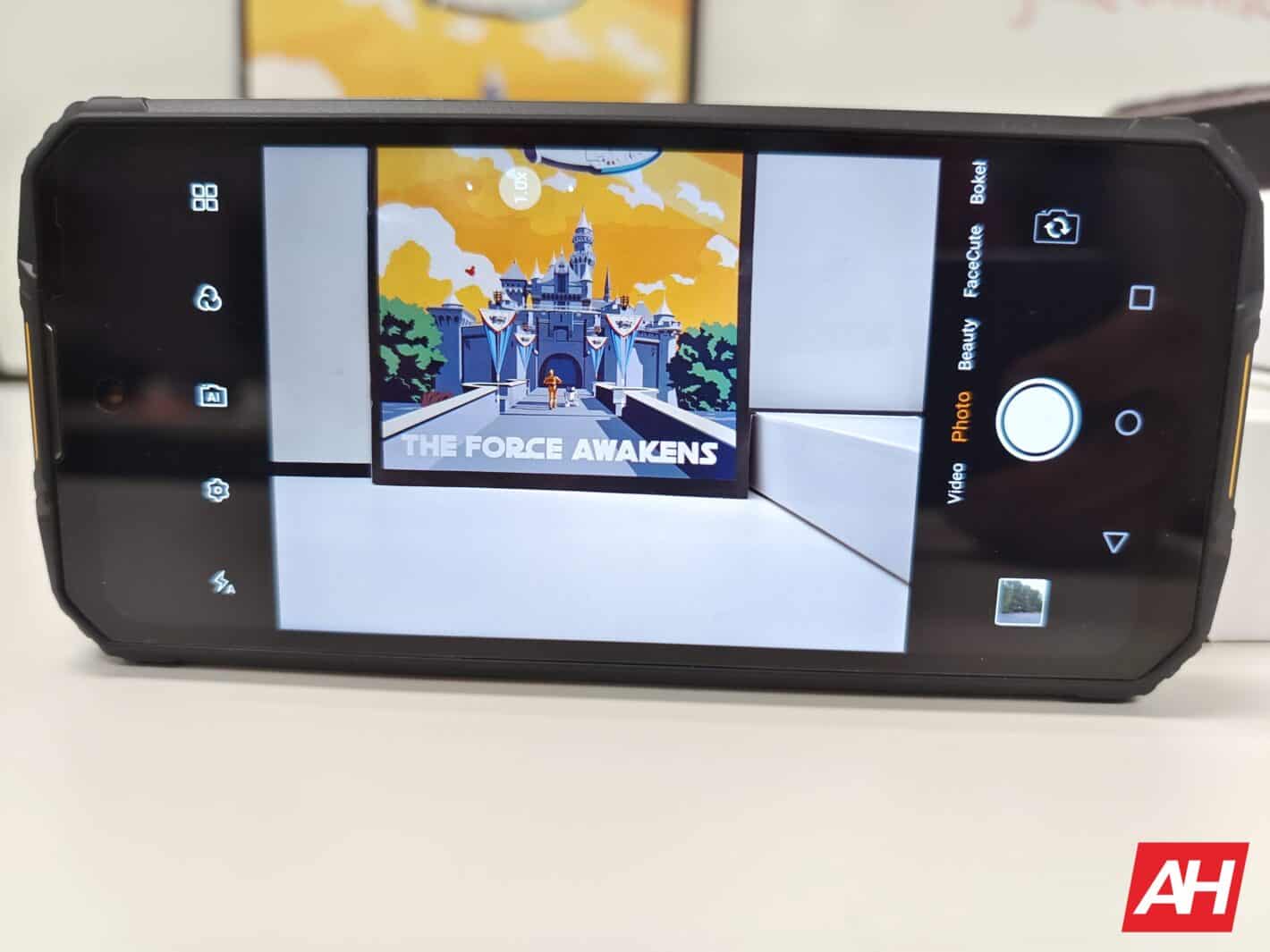 Video is FHD or 1080p for the front camera and 4K for the rear camera. Video quality is basically serviceable for small social media clips.

Camera performance is okay for the main rear camera and the front selfie camera. I was hoping for better results from the ultrawide. The macro camera results are actually quite poor and I suggest you just use the main camera and zoom in later digitally. I really hope Oukitel provides a better camera app as well via a software update in the future.  So if you want more than one good camera on the rear with a full-featured app then this phone might fall short of your expectations.

Connectivity is on point for a non-USA device 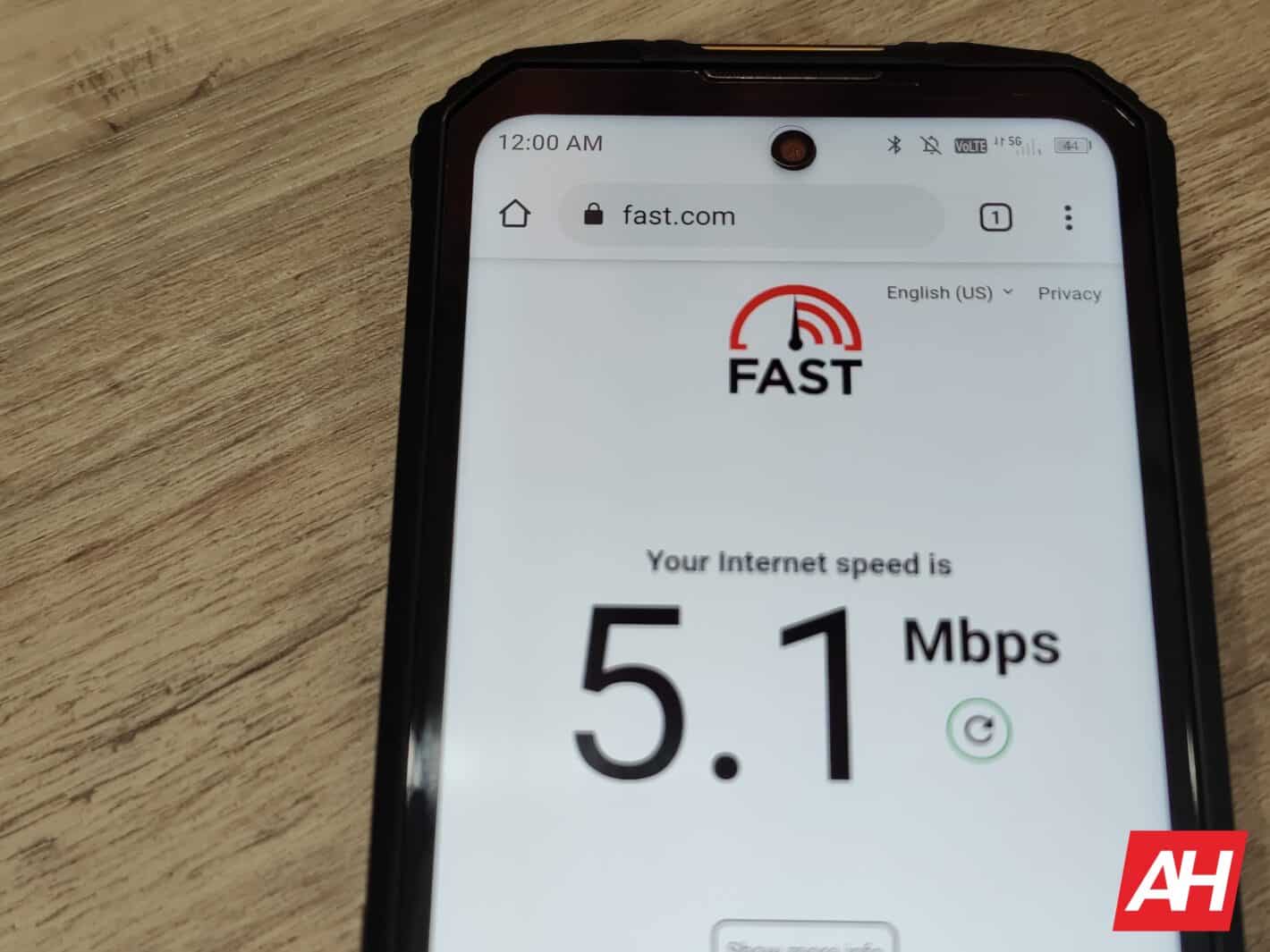 Connectivity is actually a bright spot for this device. Out of the box 5G, VoLTE, and VoWiFi connections pop up as soon as I put my T-Mobile SIM card in it. Download and upload data speeds compare well with my Samsung Galaxy S21 on the same network. I cannot comment about the results with AT&T since even the new OnePlus 9 series isn’t too sure about 5G on that network. I would still recommend that you research the network compatibility of this device prior to purchasing it for use in the USA.

As far as call quality goes, I had no issues in handset or speakerphone mode. Texting, downloading apps, catching up on YouTube subscriptions, or streaming music via Spotify were all as expected and similar to my other devices on the T-Mobile network. Bluetooth pairing with my Enacfire E90 earbuds was quick and easy as well. There is RC5 support built-in since Google Messages is the default texting app so that is a definite plus in my book.

As far as contactless payments go, this phone has NFC and I had no issues using Google Pay during my review period.

So should you buy the Oukitel WP10 5G rugged smartphone? 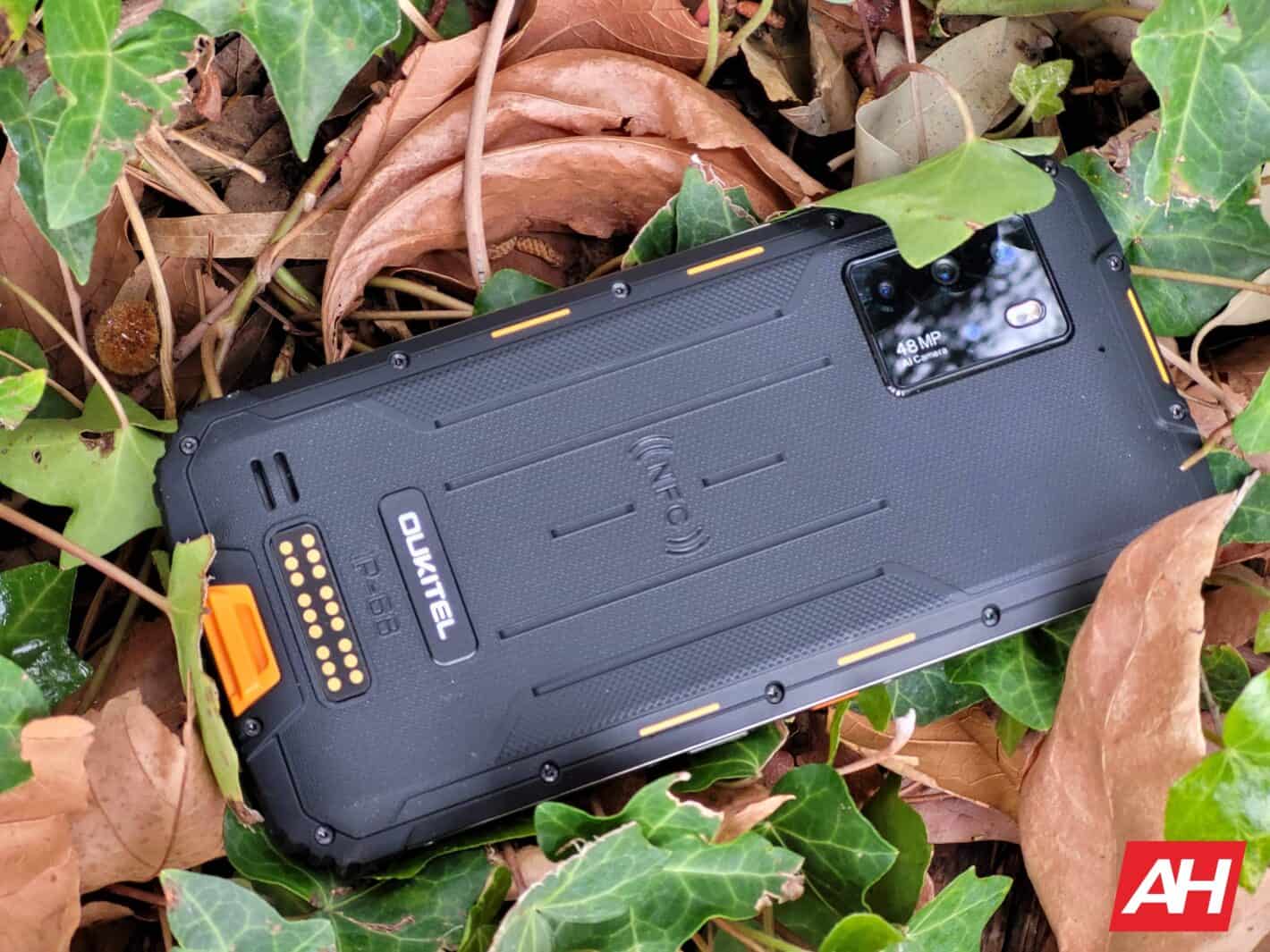 If you are looking for a rugged smartphone with good specs, 5G connectivity, large screen, and excellent build quality then the WP10 5G should be on your list. The only drawbacks are not so bright screen, so so camera performance and long term software support. But the rest of the hardware specs are good enough that this phone should be good in terms of performance for at least two to three years down the line.

And right now between March 29 and April 2nd, Oukitel is running a special promotional price for this device making it a decent buy especially if you need a smartphone for a harsh work environment.