The very first software update is rolling out to the OnePlus 9 and 9 Pro, and it’s mainly focused on the camera. There are quite a few entries in the changelog, though. Speaking of which, the changelog is the same for both phones.

The update landed on both of our review units, though it arrived on the OnePlus 9 Pro later than it did on the OnePlus 9. The point is, both of these updates should be available the moment you power on your OnePlus 9 series device, and connect it to the Internet.

The update weighs 345MB, and it will update the software to OxygenOS 11.2.1.1. Global, European, and Indian models are all getting the update, by the way.

In regards to the changes, the camera category has the most entries in the changelog. This update will optimize videos filming fluidity, while it will also optimize the noise and white balance issues with the rear camera.

The rear camera’s nighttime brightness and control will also get tweaked, as will the color performance of the Pro mode. That is pretty much it as far as the camera changes are concerned.

The company also fixed some Bluetooth compatibility issues, and improved the stability of the telecommunication functions. The last entry in the changelog says that the WLAN transmission performance and stability has also been improved.

What’s interesting is that this update does not bring a March 2021 Android security patch to either device. You’ll still be on the February 2021 patch following the update. Let’s hope OnePlus will get those security updates under control. Such updates were kind of late with the OnePlus 8 and 8T devices. 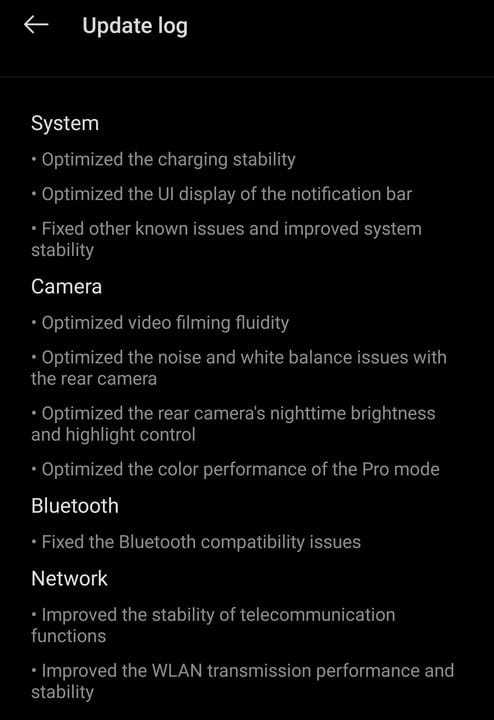