MediaTek had surpassed Qualcomm to become the biggest smartphone chipset vendor in the world for the first time in the third quarter of 2020. Now a recent by Omdia, A London-based analyst and consultancy firm, suggests that the Taiwanese chipmaker led its American rival for the whole year.

According to the report, MediaTek’s chip shipments grew a whopping 48 percent Year-on-Year (YoY) in 2020 to reach 352 million units. The company captured 27 percent of the global market. By contrast, Qualcomm saw an 18 percent YoY drop in shipments last year. It only managed to ship 319 million units of its Snapdragon-branded processors in 2020, coming second behind MediaTek with a market share of 25 percent.

MediaTek’s rise has been forthcoming ever since the Trump administration tightened its grip on Huawei with newer sanctions last year. The Chinese giant was forced to stop using Qualcomm processors in its devices, thus paving way for MediaTek to chip in (no pun intended). It closed the gap on Qualcomm to just four percentage points in the second quarter of 2020, before eventually leapfrogging the company in the third quarter.

MediaTek has also been doing a smart job by winning the battle in the budget and mid-range tier. It has also significantly improved the quality of its higher-tier offerings, including the 5G portfolio, giving itself a competitive edge.

As much as Huawei’s unfortunate situation played in favor of MediaTek, it’s Xiaomi who used the most MediaTek chipsets last year. Well, that’s understandable because Huawei is no longer the big smartphone manufacturer it was a year ago. Its compatriot Xiaomi has benefitted from Huawei’s demise.

Samsung was one of the biggest MediaTek clients last year

That perhaps kind of explains why the global shipment of Exynos chipsets declined 35 percent YoY last year. The company came fifth with a market share of nine percent, behind Apple (16 percent) and Huawei’s HiSilicon (11 percent), and MediaTek and Qualcomm, of course.

As you might expect, the shipments of Huawei’s Kirin chipsets also declined last year. However, its 17 percent YoY drop is still tinier as compared to that of Samsung (35 percent). Apple, meanwhile, managed to marginally increase its chip shipments by five percent last year.

UNISOC, a Chinese fabless semiconductor company headquartered in Shanghai, was the biggest gainer though. The company shipped 23 million chipsets last year, up 89 percent YoY from 120 million units in 2019. With Kirin chipsets disappearing from the market this year, both UNISOC and MediaTek are likely to extend this positive trend in 2021.

Overall, according to Omdia, 1.30 billion smartphone chipsets were shipped globally in 2020. The figure marks a seven percent YoY decline from 1.39 billion units in the previous year. The research firm expects the market to rebound in 2021. 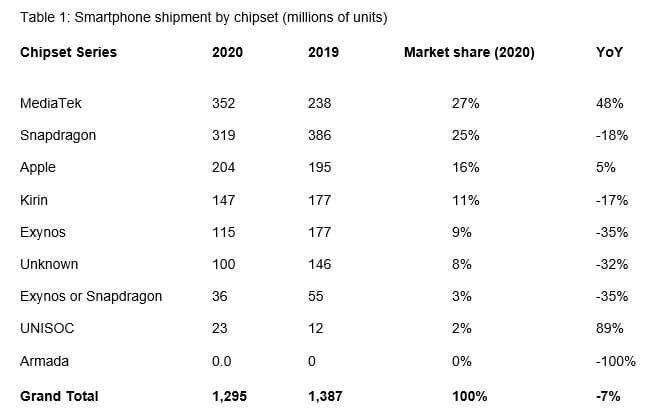