According to The Verge, Google will stop tracking users after replacing third-party cookies. Google is putting the safety and privacy of its users first over their lucrative marketing business. Google is phasing out their usage of third-party tracking cookies. Thankfully Google has promised to not replace these cookies with an equivalent option.

In a post by Google, the search giant explicitly states that it “will not build alternate identifiers to track individuals as they browse across the web.”.

Google says that it will use “privacy-preserving APIs” that will prevent individual tracking. These APIs will power their services and will deliver advertisers and publishers the results they need.

According to Google, “advances in aggregation, anonymization, on-device processing, and other privacy-preserving technologies offer a clear path to replacing individual identifiers.

Other browsers such as Safari and Firefox have been blocking third-party cookies for a while now. Google is planning to do the same with its Chrome web browser. Cookies, for anyone who doesn’t know, allow advertisers to track users as they move between websites.

This gives the advertisers insight into what users are interested in. The ads which are produced by these advertisers are hyper-targeted ads and are very valuable. As a result of this, the advertising industry thrives on individual user data.

As a result, users do not trust the internet or advertisers as much. This puts the future of the web at risk. Advertising is the main way companies make their money on the internet. Because of this Google is moving away from third-party cookies and toward “a more privacy-first web.”

To be clear, the search giant is not getting rid of targeted advertising in general. Instead, it wants to replace the current invasive methods with a new design of its own it calls Privacy Sandbox.

Google will stop tracking individual users. Instead, will focus on a crowd of cohorts

The job of the Privacy Sandbox is to hide the individual inside a large crowd of “cohorts” who all have similar interests. The ads will then apply to the large crowd of cohorts instead of each individual.

Android Police did a teardown of the Chrome 89 beta apk and were able to get a first look at the Privacy Sandbox controls and the “Web Crowd” cohorts for more relevant advertising:

As Google faces increasing regulatory pressure around the globe the company is embracing a privacy-first web. Google acknowledges this and says that some of its competitors will continue to pursue solutions built around individual identifiers.

As Google says, “We realize this means other providers may offer a level of user identity for ad tracking across the web that we will not- like PII graphs based on people’s email addresses.” As a result, Google says that they do not believe the old solutions will meet rising consumer expectations for privacy. 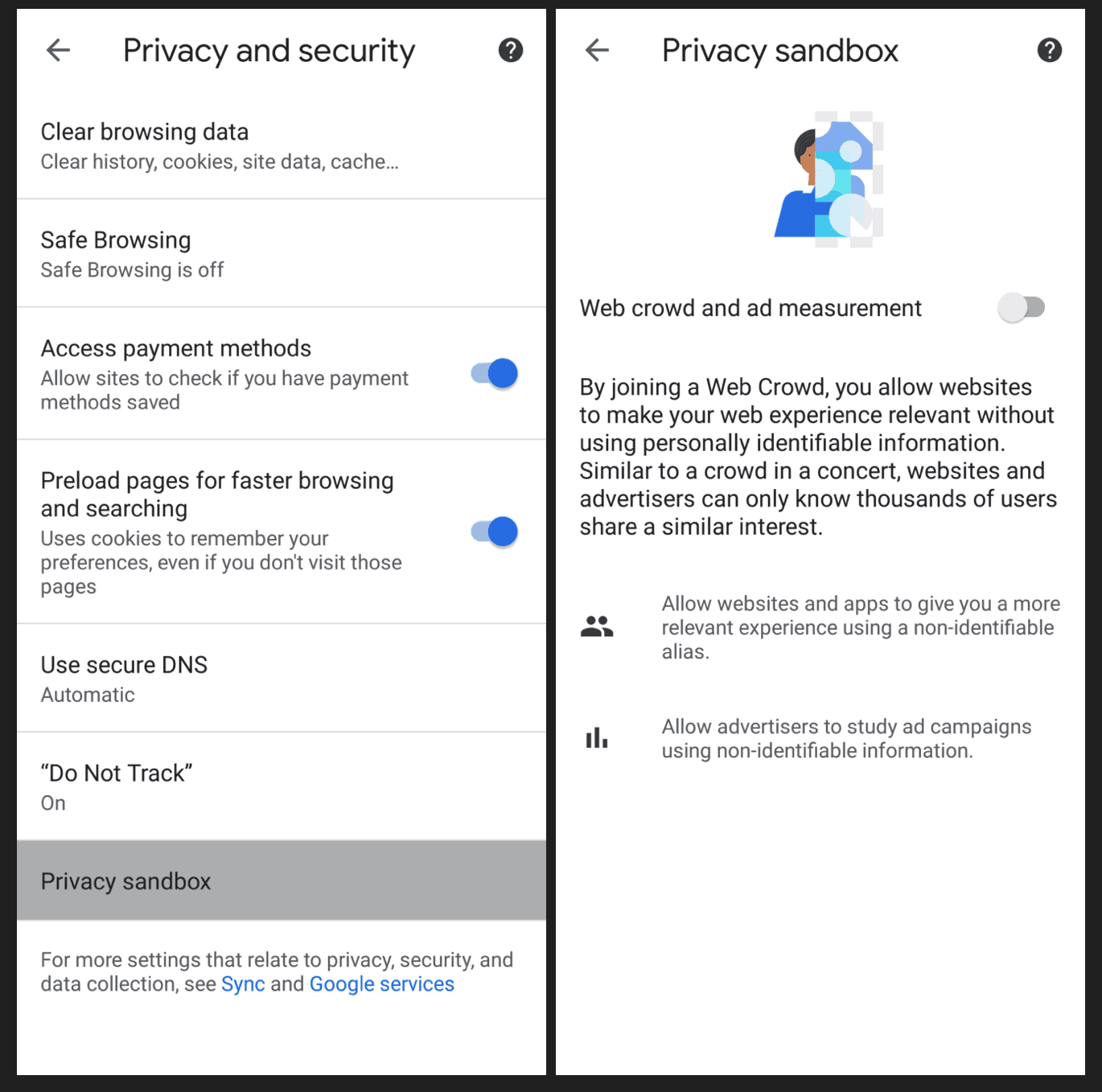