Samsung‘s Galaxy S21 series arrived earlier this year with a bunch of new and impressive camera features. Some of those features have since trickled down to the Galaxy S20 and Galaxy Note 20 phones, including the affordable Galaxy S20 FE. However, Director’s View, which is one of the best features on a smartphone camera ever, didn’t make it to any of those phones. It appears Samsung is finally preparing to bring the coveted Galaxy S21 camera feature to some of its older flagships.

The evidence comes from a software support page for the Galaxy S20 5G on T-Mobile USA’s website. The carrier has recently updated the support page to include instructions on how to use Director’s View. Of course, the feature is not available on any other Galaxy smartphone except the Galaxy S21 series. However, since the support page was updated to explicitly add those instructions, it strongly suggests that Director’s View is coming to some of Samsung’s older flagships soon.

Director’s View lets users see the real-time output from all of the phone’s cameras at once. You can switch between views from the different lenses by tapping the thumbnails on the screen on the left. You can also switch to a close-up view by tapping the thumbnails on the right. In short, Director’s View gives users more control over the cameras while recording. This allows them to capture a scene in the best possible way from their phone.

Debuted with the Galaxy S21 series, there were expectations that the feature would make it into older Galaxy flagships with a software update. Samsung did recently rolled out new updates to the Galaxy S20 and Note 20, introducing several Galaxy S21 camera features. The devices picked up support for portrait images in low-light conditions, ultrawide camera support with Night Mode, new studio-like effects in the Portrait mode, the ability to use the maximum possible exposure in the Night Mode, and much more.

However, as said earlier, Director’s View didn’t make it into any of those phones with the said updates. There were speculations that this lack of support is because of the limitations in those phone’s ISP (image signal processors). But that’s seemingly not the case and Samsung is preparing to bring the feature to its older flagships soon.

The updated support page on T-Mobile USA’s website appears to be published prematurely before Samsung could release the update. However, there’s also a possibility that it’s a mistake on T-Mobile’s part, especially because the updated page mentions the wrong Android version (Android 10). That’s highly unlikely though as the instructions come complete with visual illustrations.

Samsung has yet to say anything about support for Director’s View on its older flagships. However, if the feature is indeed coming to any of those phones, then an update shouldn’t be too far away. We’ll keep you posted as and when we have more information. 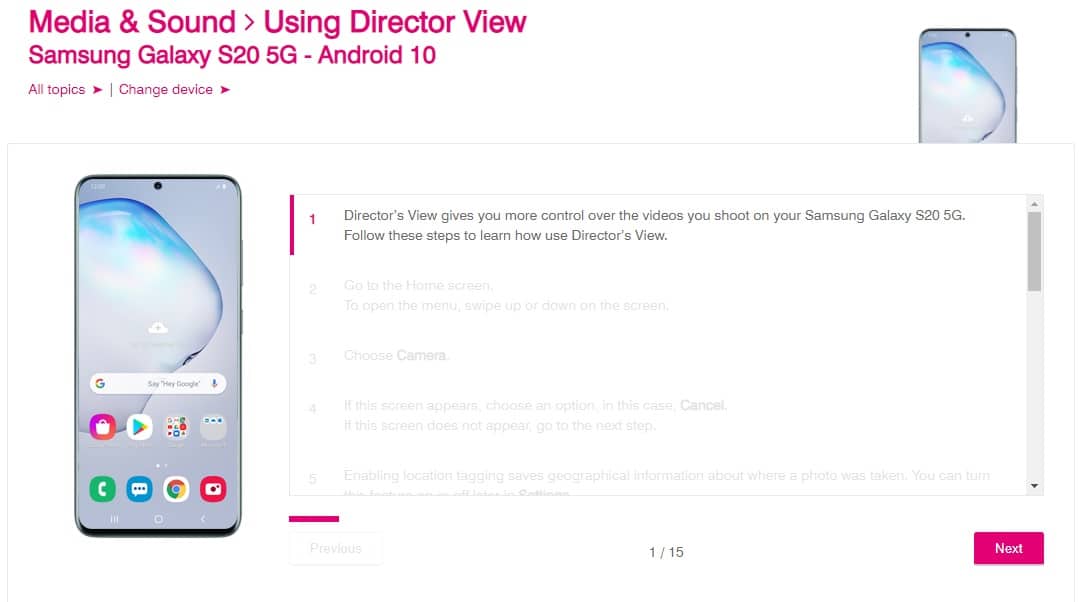