Foldable smartphones are quite expensive at this point in time. The more of them we see on the market, the cheaper they’ll become. Xiaomi in specific is expected to push towards lower price tags for foldables. The company’s foldable smartphones will probably still be quite pricey, though.

Foldable smartphones won’t replace regular ones anytime soon, but a surge is expected in 2021

Foldable smartphones won’t replace regular smartphones anytime soon, but it seems like analysts are expecting quite a surge in 2021. According to DSCC (Display Supply Chain Consultants), foldable / rollable smartphone shipments in Q4 2021 are expected to reach an all-time high.

Shipments in Q4 2021 are expected to be so high that they will surpass the combined shipments from Q1 2020 to Q2 2021, according to analysts. You can check out the graph below for more information. 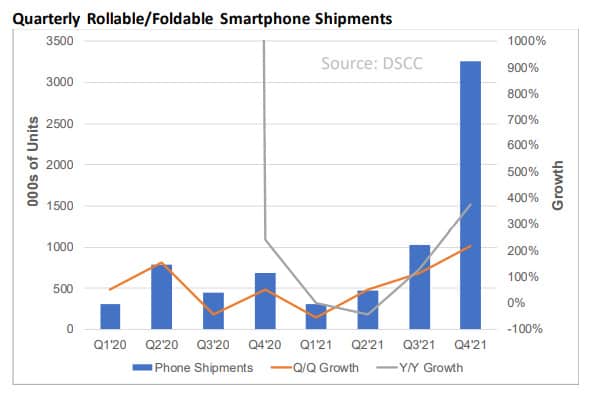 The shipments for Q1 2021 are barely expected to rise. They’re expected to rise only 1-percent YoY, which is not surprising, considering the lack of new foldable device launches. The Huawei Mate X2 did launch, but it launched in China only.

Things will change throughout the year. Not only will many companies release their first foldables, but Samsung, Huawei, and Motorola are expected to release new ones as well.

Foldable smartphones from OPPO, Vivo, Xiaomi, and Google are all expected to include displays from Samsung. The company actually expects to ship out 1 million foldable displays to Chinese OEMs this year.

Xiaomi is actually expected to announce its first foldable smartphone really soon. The company is tipped to launch three foldable devices this year, which is kind of surprising, but we’ll see what will happen.