It looks like smartphones will be getting much more powerful than they are now. Android Authority is reporting that the new Arm Armv9 architecture is set to take smartphones to the next level. As many users know, the architecture of a processor is very important when it comes to performance.

The architecture defines how a processor works, what it can do, how memory is accessed, and much more. So needless to say a new architecture coming to market is a major deal. The new Armv9 will have an all-new physical hardware design, instruction sets, and capabilities.

Smartphones have been using Arm’s Armv8 architecture for their processors, and revisions on that architecture for a decade. The new Armv9 will herald in a generation of new CPU cores that will be at the heart of future smartphones.

This new architecture is the first from Arm in a decade and will change how the next generation of mobile, server and other processors will work. Arm says that the next two generations of CPU designs will boost performance by 30% compared to today’s highest performing Cortex-X1 CPU core.

This is ignoring any type of clock speed boosts or any other manufacturing benefits that may squeeze out more performance. In addition, the Armv9 will be faster than the Armv8 when it comes to machine learning workloads, and it’ll be more secure.

Those last two points are extremely important. Machine learning is becoming more and more prevalent in current smartphones. Also, the introduction of features like using smartphones as car keys, IDs, and more security is a must.

Android Authority explains that thanks to advanced math crunching improvements stemming from enhanced matrix math capabilities are one thing leading to increased performance. In addition, the second generation of Arm’s Scalable Vector Extension (SVE2) will also help bring these improvements to the world.

The first generation of SVE was designed for the Fugaku supercomputer. But, the SVE2 is more flexible works with general-purpose computers. Getting a bit geekier the SVE2 builds on ARM’s NEON math library. However, the SVE2 is redesigned from scratch for improved data parallelism.

The SVE2 also supports NEON and increases digital signal processing performance as a result. Both the SVE1 and SVE2 allow for flexible implementations in 128-bit increments up to 2048. CPU designers will benefit from this greatly.

In addition, new data types and instructions such as bitwise, permute, complex integer multiply-add with rotate, and others. This leads to the ability of large integer arithmetic and cryptography processing.

Common algorithms also get a speed boost from SVE2. These algorithms are used for computer vision, multimedia, LTE baseband processing, web servicing, and more. All of these are important in a smartphone.

Moreover, SVE2 speeds up machine learning performance and DSP workloads on the CPU. This will lessen the need for external DSP and AI processing hardware. For those really concerned about security the Armv9 architecture has you covered. 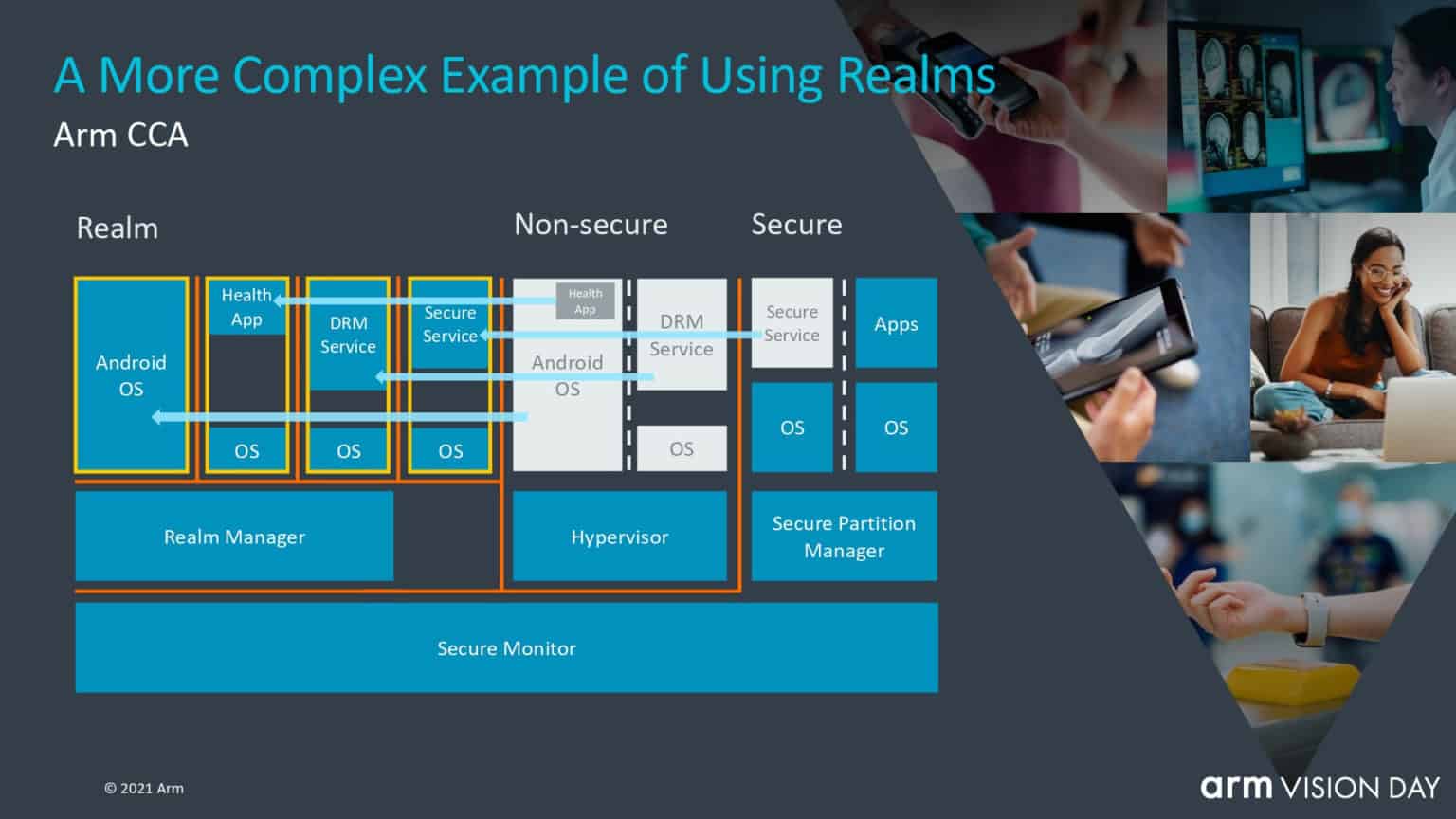 For those who do not follow Android development, Tagged memory (MTE) helps prevent memory vulnerabilities. It does this by using a “lock and key” approach. A memory pointer receives a tag at creation. Then load/store instructions check this tag. Doing this ensures the correct place accesses the memory.

As a result, memory tagging running in hardware reduces the performance penalty. But wait there is more. Arm’s Realm Management Extension and CCA are broader in scope. This also builds on the ideas of Arm TrustZone.

In doing so, applications are safe and can run in their own secure environment away from the main OS. This will keep any problems with the app contained to itself and away from other software. Realms also support the secure separation of individual apps and services that share a common OS.

To simplify, each Realm can not see what another realm is doing. This reduces data leaking to another compromised app or the OS as mentioned earlier. This is great news when it comes to banking apps.

The Armv9 architecture will continue to spread to the Arm microcontroller, real-time, and application processors over time. The Cortex-A for smartphones will come to market first. After that server chips will be next.

OEMs will be announcing the first Armv9 smartphones this year. These devices will find their ways to market in 2022. As said at the beginning of this article, smartphones will be getting much more powerful.