It’s been just six months since the release of Android 11, and the adoption of the OS is going in full swing. According to the latest data from StatCounter (via derStandard), nearly 1 in 5 Android devices run on Android 11 in the US.

This feat is quite amazing and is almost on the verge of surpassing the previous record set by Android 9 and Android 10 OS in taking the biggest market share. This makes the adoption of Android 11 the best there has ever been for Google.

Especially in the US, the rollout of the Android 11 operating system really picked up over the last few months. Which is now being reflected in the data by StatCounter.

Devices from Google and Samsung were the quickest to adopt the latest Android 11 OS. In fact, these brands have taken a step further, because nearly 20% of phones are coming with Android 11 out of the box.

StatCounter also highlights the data from other parts of the world. This includes Canada, U.K., Germany, and Oceania. Luckily, the trajectory of Android 11 adoption is the same as that of the US, i.e. it is going upwards in these regions as well.

Well, previously it took a good amount of time for smartphones from different brands to adapt to the latest Android OS. However, the latest numbers for Android 11 also show that the OS update distribution has also improved.

Although the data is good, the numbers probably aren’t as high as Google would hope. Since the volume of the devices has increased, distributing a significant amount of updates is a huge challenge.

Note that the official distribution numbers are only available in Android Studio. So, it is not available for everyone to see. Thanks to StatCounter, we at least have an overall picture of the adoption rate of Android 11 in the US.

Google has been working quite seriously in improving the rollout of updates. There are programs like Project Treble, and a partnership with Qualcomm to support four Android versions for new Snapdragon chipsets.

This, on paper, means if you buy a new Android device, you should get Android 11 plus 3 more years of Android OS updates. But in reality, that is not the case.

It only means that there is a framework that supports this update support, and it is up to the OEMs to choose whether to adopt it or not.

Android 12 is already out as Developer Preview 1, and we have already seen some new awesome features included with it. Let us hope devices that are left also receive the Android 11 update soon. 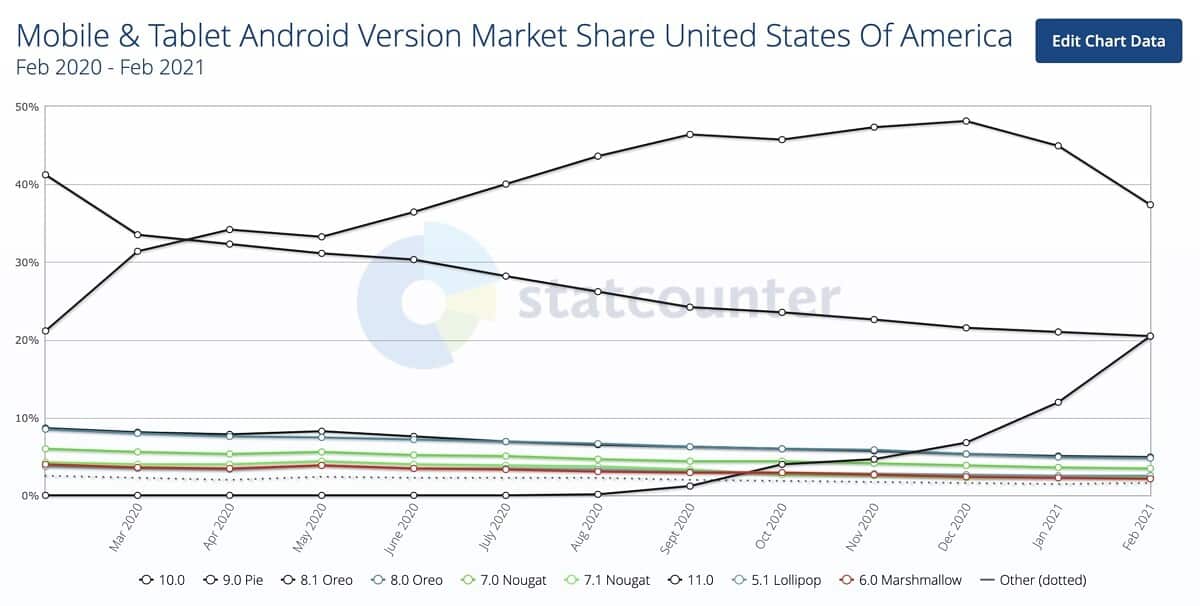