A Twitter Safety mode is on the way according to Engadget. The new feature will automatically detect and block mean and abusive accounts. The news was given at Twitter’s 2021 Analyst Day presentation. Unfortunately, the event did not give many more details.

The feature will prevent blocked accounts from tweeting at you for seven days according to slides. In addition, these accounts’ tweets will not be seen by as many people thanks to Safety mode. As a result, the account’s toxic tweets will have a smaller footprint.

For any users who will use this feature, they will receive a notification letting them know the new feature is doing its job. As a result, users will be aware when an account has been blocked.

This feature is a welcome piece of news. The social media platform has not been the best at keeping its platform from being so toxic. Twitter does have a lot of users who like to voice their views on various topics such as religion, politics, and more.

After that promise, Twitter actually created algorithms to crack down on these types of tweets. As a result, Twitter has found these abusive tweets 50 percent faster than users can find them.

Twitter isn’t inherently more toxic than other social medial platforms. But, because of its ease of use, and ease to speak your mind it is easy for it to grow into that. Unfortunately, mean people can easily corrupt anything.

Twitter did not give a timeline for when this feature will roll out. However, once the Safety mode does roll out it will help to make Twitter much safer for its users. 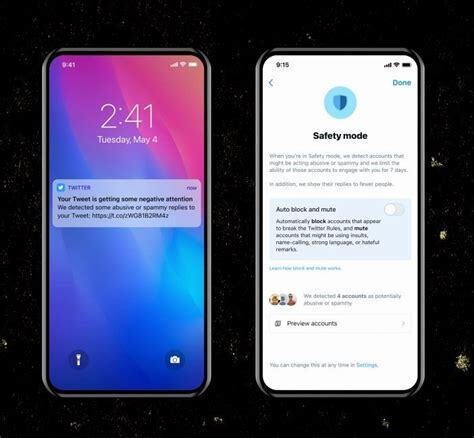